Fernando Botero describes himself as a ”post-abstract realist” who paints memories in a realistic manner. His canvases are filled of voluminous people in everyday scenes from his home country, Colombia. Botero thinks the voluminous bodies are actually rather slim, saying, ”It is to make them sensual that I let my characters swell”. The historical references in his work are clear. Botero travelled to Europe in the early 1950s, after abandoning his previous career as a matador. In Florence and Madrid he was taken by the renaissance and copied older masters such as Goya, Velásquez, Uccello and della Francesca.

His artistic breakthrough came a few years later during the 1960s when Botero exhibited the iconic works of Mona Lisa (1961) and the President’s Family (1967) while living in New York. It was then that Botero consolidated his painting style that has come to represent his signature and which has been given its own name, ”Boterismo”.

This auction’s work, ”The Bathroom”, was featured in an exhibition hosted by the Swedish Museum of Modern Art in 2001/2002, which was a close collaboration between the then museum manager David Elliott and the artist himself. 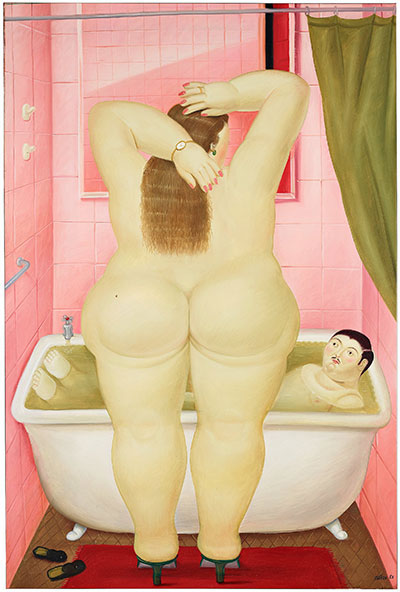