The exhibition, with its appropriate title of ‘Sjömanskompositioner’ [Sailor Compositions], became GAN’s most consistent solo show to date. In the crucially important catalogue introduction, GAN wrote, amongst other things: “I have attempted to achieve the essence of the sailor: the ever-changing, surging adventures, the direct but grey discipline, their deep blue desire, and their blazing passion… The armoured vessel that I am painting, the sailors I choose as its crew, are but symbols of the structure of all armoured vessels, of the lives of all sailors. It is of no interest to me to portray a certain boat, a certain seaman. It is only by considering my task symbolic that I may have the chance to succeed in representing the inner meaning of the grey weight of the armour, the green lightness of the water, the blue power of the sailor’s body”. He also takes a stand when it comes to the question of style: “Neither cubism nor futurism, any more than expressionism, can be said to have solved the problem of form and colour in such a consummate way that, separately, they can stake a claim of being the ultimate style. The philosophy of volume in cubism, the illusion of movement in futurism, and the psychology of colour in expressionism are but insinuations of a result, which will synthetically absorb them all. In my paintings the geometric construction is evident. It has, however, not originated from studies of Euclid’s complex of problems, but emerged by itself, in the developmental process of simplifying the shapes and their correspondence” (as quoted by Jan Torsten Ahlstrand, Art Historian and expert on GAN). 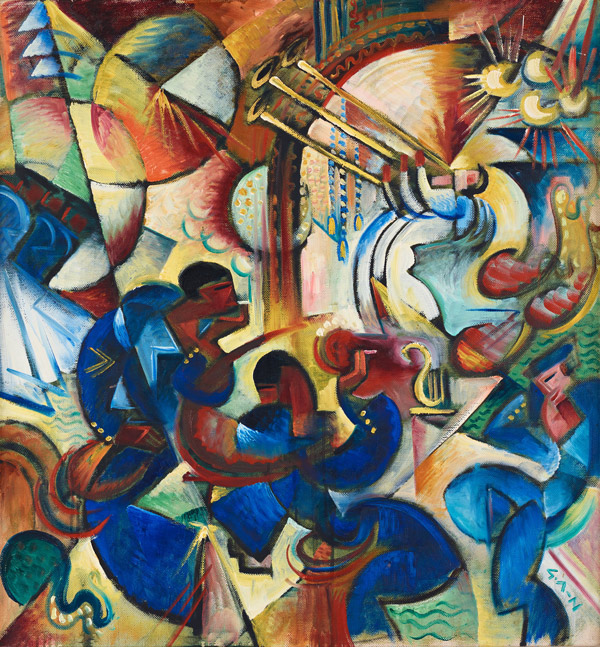 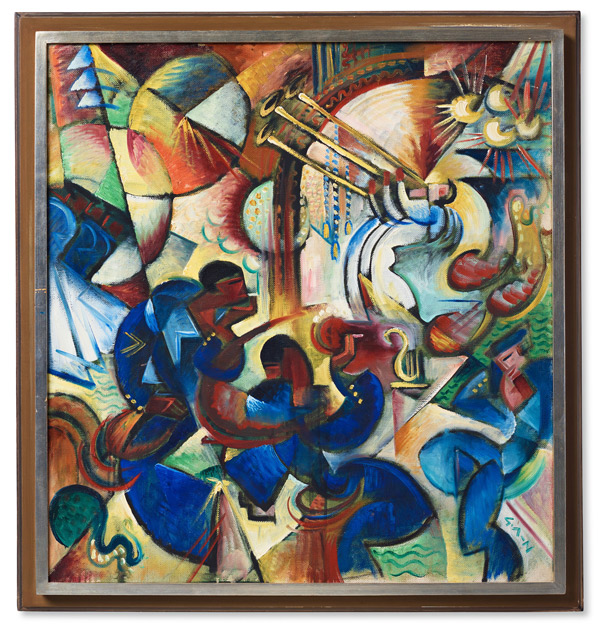 Ahlstrand describes GAN’s time in Stockholm between 1916 and 1919 as follows: “But there was another world, separate from that of his artist colleagues, which GAN was pulled towards as if by magnetic power. Every Saturday night that he had some money in his pocket, he presented himself at the establishment Berns Salonger dressed in his most elegant clothing. He would then, either in the grand restaurant or in its environs, strike up erotic contacts with ‘the navy-blues’. At that time there were plenty of poor sailors in need of money in Stockholm. The homosexual prostitution in the immediate vicinity of Berns, at Berzelii Park, or around Norrmalmstorg was flourishing. It is unusual that it seems to have prevailed as openly as it did since the law prohibited homosexual relations. (…) The interest in sailors had already had a lot of impact on GAN’s earlier work. After his move to Stockholm, he became almost obsessed with them.”

In the painting in the auction, Sjömän from 1918, the perspective is cubistically fragmented in surface planes, where GAN has painted three sailors accompanied by angels playing wind instruments in the background. The sailors’ s-shaped bodies are dramatically crossed by sharp diagonals traversing the image and giving the painting an almost kaleidoscopic perspective. The colour palette is highly charged with the primary colours of red, blue and yellow in pure fields set in contrast to and vibrating against each other.

During the summer and autumn of 2019 Sven-Harrys Konstmuseum in Stockholm put on the exhibition ‘Gösta Adrian-Nilsson – Sjömanskompositioner – färgens dramatik och stadens dynamik’, which took as its starting point the notorious exhibition at Gummesons konsthall in 1918. Curator Pedro Westerdahl wrote in the introduction to the exhibition catalogue how: “During his time in Stockholm, between 1916 and 1919, Gösta Adrian-Nilsson (GAN) created a significant number of what is categorically his most astounding paintings.” 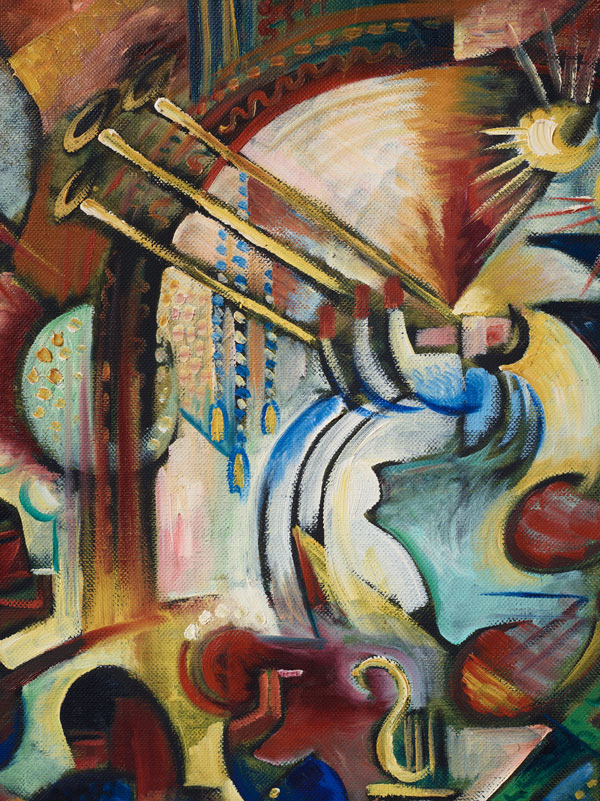 All works by GAN to be sold at Modern Art + Design 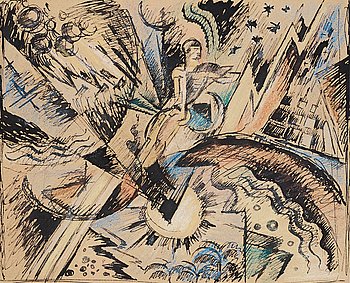 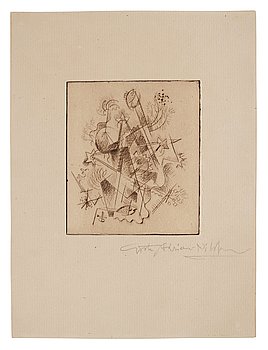 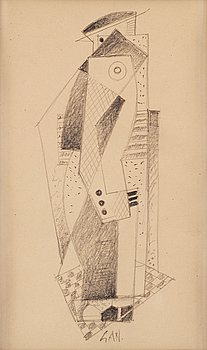 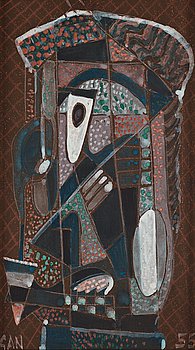 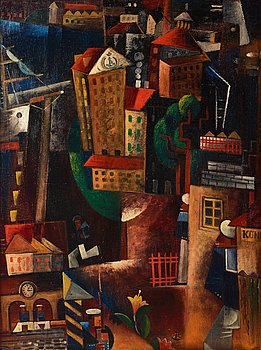 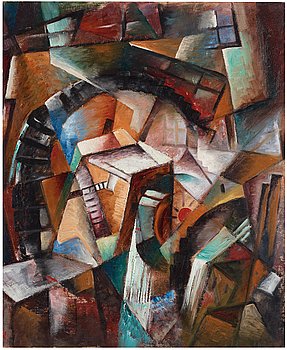 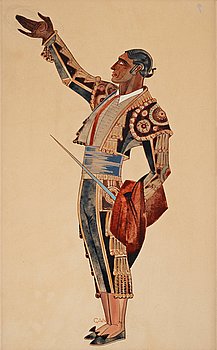 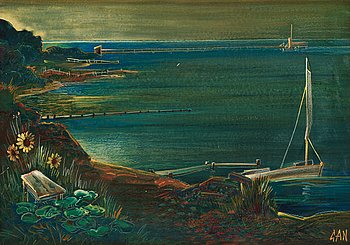 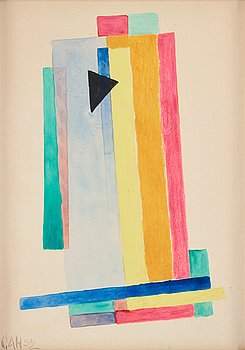 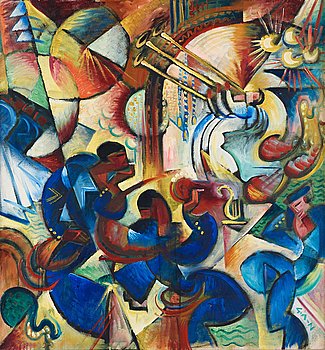 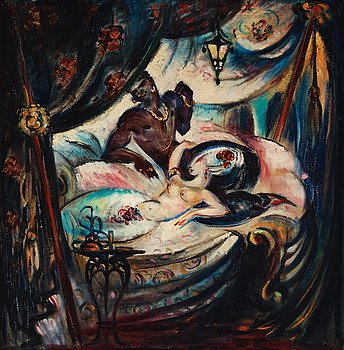 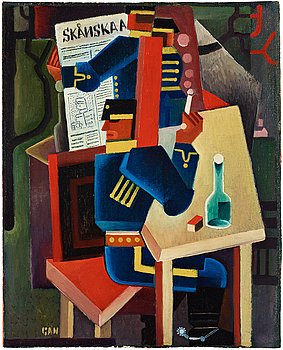