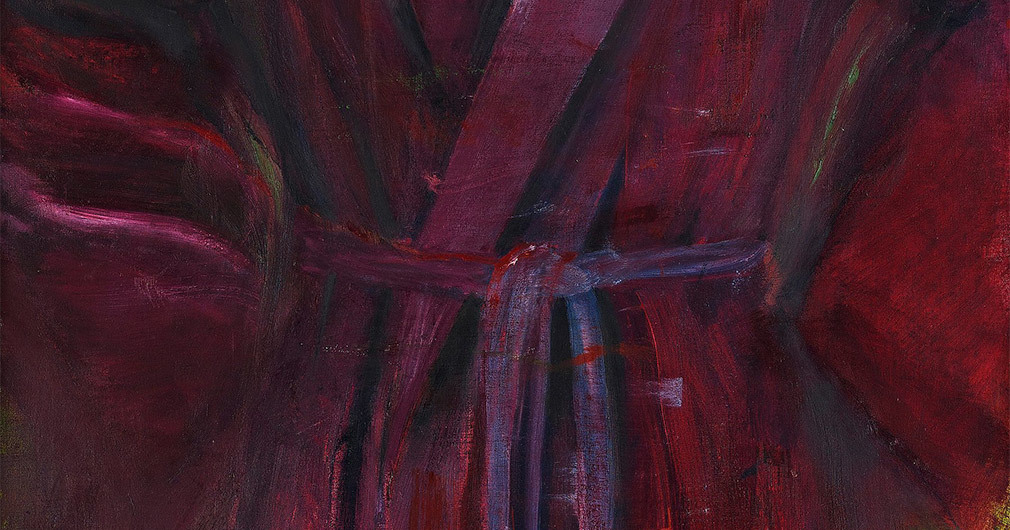 The painting “In the harem, Abu Tor” (1979) depicts one of Jim Dine’s most iconic subjects, a bathrobe. Bathrobes were a central motif throughout Dine’s career as an artist and recur in numerous of his many techniques. Dine started painting bathrobes in the 1960s. Although he admitted he never wore one himself, they took on the form of a self-portrait early in his career.

In an interview in ARTnews in September 1977 Dine described his relationship to the magical bathrobe:
“The robes have become much more mysterious than they used to be, and that’s because I understand them more. Obviously, there’s some hidden significance there. But what’s funny is that I don’t own a bathrobe. I don’t wear one. I don’t walk around in one. I never see bathrobes around me, nor do I see people wearing them. I don’t have a bathrobe to paint from. What I use is what I’ve used from the very beginning—a newspaper ad which I clipped out of The New York Times back in 1963. The ad shows a robe with the man airbrushed out of it. Well, it somehow looked like me, and I thought I’d make that a symbol for me. Actually, it all began when I wanted to paint a self-portrait . . . and just couldn’t. It’s important for me to say this, because what I really wanted to do was sit in front of a mirror and paint a portrait of myself. But at the time, I was in analysis and the pressures I felt prevented me from going through with it.”

Jim Dine has been represented by the Pace Gallery in New York since 1976 and this was also where he first exhibited a series of large paintings of bathrobes. The colourful painting “In the harem, Abu Tor” was completed in 1979 when Dine’s career had truly taken off. In the previous year he had a retrospective one-man show at the Museum of Modern Art (MOMA) in New York. Several exhibitions were to follow and he has now exhibited more than 300 times in institutions and galleries around the world.

Jim Dine’s art has been strongly associated with his range of subjects. The recurring topics include the heart, tools, brushes and Pinocchio, the latter particularly dear to the hearts of Swedish audiences thanks to the monumental, much-discussed sculpture unveiled in Borås in 2008. Dine has worked on the different series of motifs in a number of different techniques and made them his own. They never involve a simple repetition. Each work is a unique interpretation in its own right. The heart has been a central subject throughout Dine’s artistic career and is a recurring feature in his paintings, drawings, sculptures and graphic art. Using a universal, uncomplicated symbol enables him to explore the relationship between texture, colour and composition, allowing both himself and the viewer to apply their own emotions and ideas to the form. The heart becomes a blank page that can be filled with content and meaning.

The large triptych “Desire (A study)”, mixed techniques on paper, 1981, brings together Dine’s two favourite subjects – the bathrobe and the heart. With its expressive, emotionally charged painting, the work is everything a Dine lover could desire. 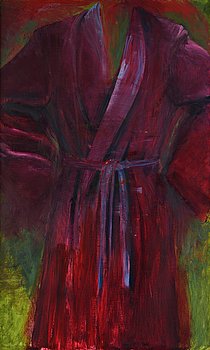