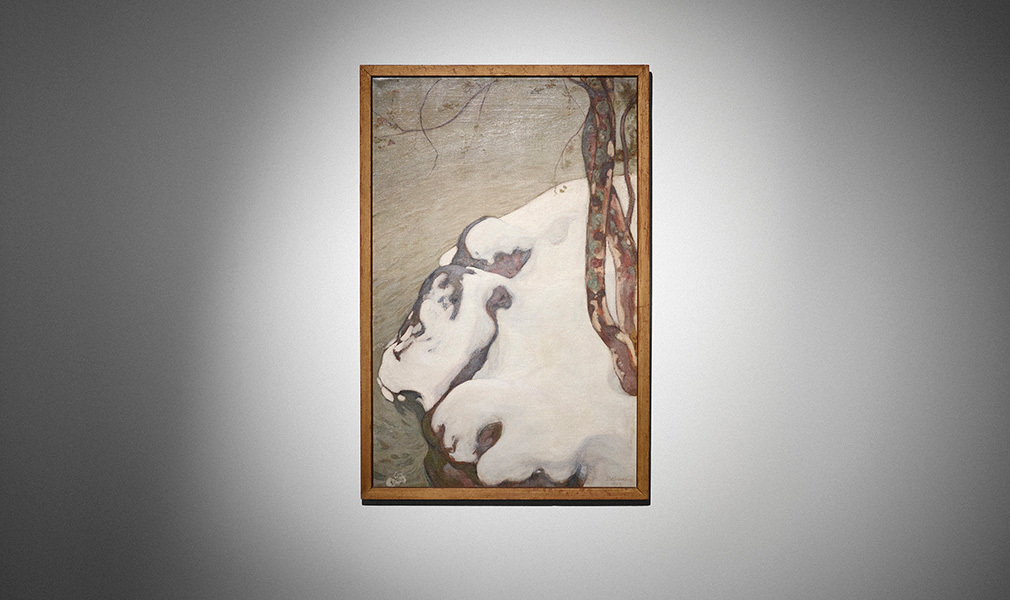 Pekka Halonen painted his first significant winter landscapes in 1895, the same year he got married to Maija Mäkinen. The young couple spent an unforgettable winter in the snowy and beautiful landscapes of Sortavala, where Halonen got inspired to paint decorative landscapes in harsh winter conditions. Also in general, winter landscapes were popular motifs among nationalistic young artists. They were considered to be ”the finest exoticism of the North”. It is though indisputable that no other artist could capture the different nuances of snow and winter landscapes like Pekka Halonen.

In addition to the nationalistic influences also Paul Gauguin (1848-1903) and the Nabis-group had a profound impact on Halonen´s winter landscapes. This source of inspiration was born during his studying years in Paris. The base of the synthetic art of the Nabis-group was highly attached to Japanese art. Presumably Halonen got familiar with Japanese woodcuts in Gauguin´s atelier and every department store and gallery in Paris was filled with Japanese art and objects at that time. Halonen was drawn to the Japanese expression and after his third trip to Paris, he started to collect Japanese woodcuts and continued to implement Japanese elements in his paintings.

From japonism Halonen picked ambiguous motifs from the nature, diagonal perspectives and in particular the asymmetrical composition, which is repeated in his works continiously throughout the years. The standing and narrow kakemono- as well as the low and long makimono-form, high horizon, and the use of forest interiors exist in his whole production. As his master Gauguin, Halonen was an artist that walked his own path and he converted Japanese influences to something of his own and completely unique in his art. If Halonen felt that he had succeeded particularly well with a work, he could joyfully proclaim that it has a ”Japanese vision”.

”The first snow” from 1902 is a model example of the above mentioned. In this work every characteristic from Japanese art is present; kakemono-form, the diagonal perspective, the asymmetrical composition, lack of shadows, even surfaces, ornamental water and trees and the pure palette, based on the contrast between dark outlines and white snow. The work is in many ways unique and represents by all means the finest exoticism of the North.

Bid on works by Pekka Halonen: