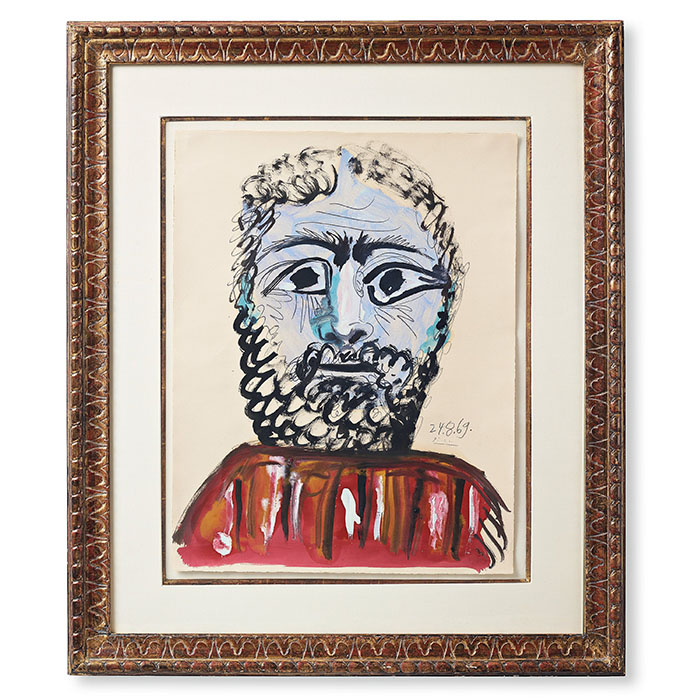 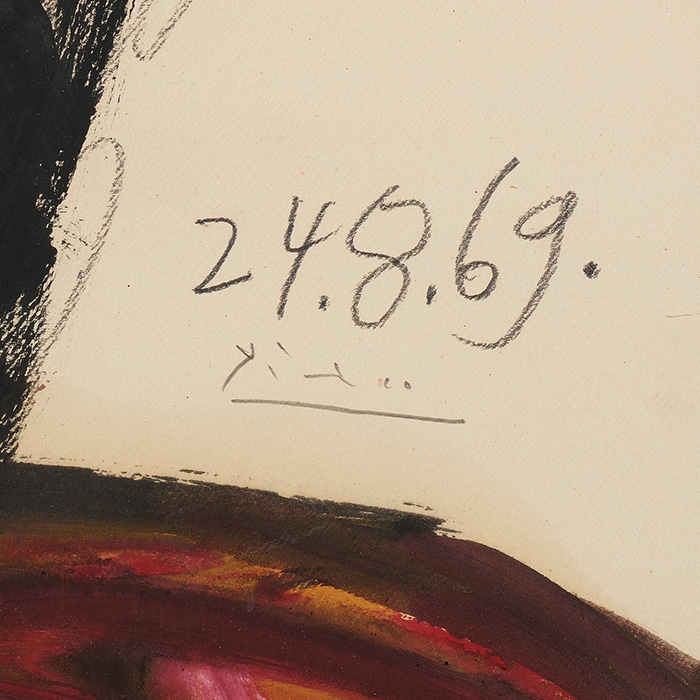 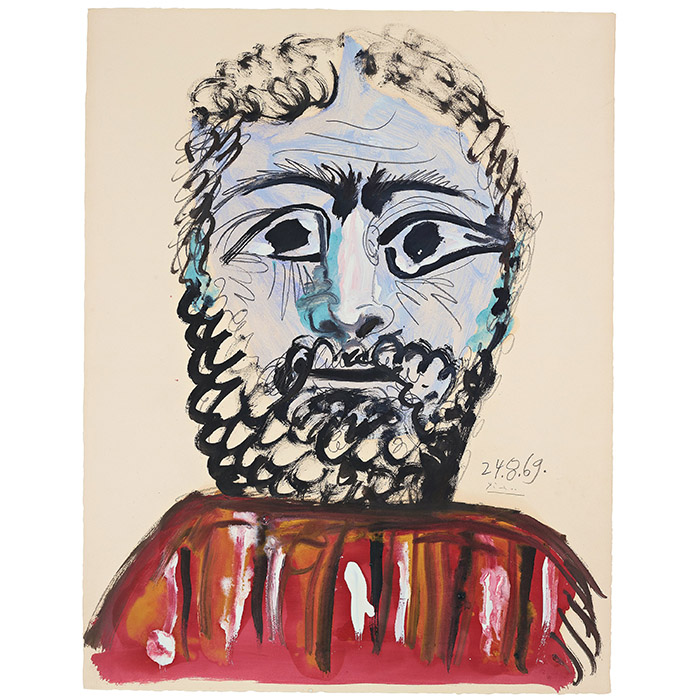 In Picasso’s later work he repeatedly depicts himself as an adventurous musketeer full of vigor. The compositions are reminiscent of iconic old master paintings but use Picasso’s expressive and unmistakable brushstrokes. During a period towards the end of 1965 when Picasso was recuperating from an surgery at home in Notre-Dame-de-Vie, Mougins, he ploughed his way through literary classics, devouring works by Shakespeare, Alexandre Dumas, Charles Dickens and Honoré de Balzac. Throughout Picasso’s last years he produced a remarkable number of paintings and drawings as if in a race against time. By exploiting the musketeers’ individual characters Picasso was able to reveal different sides of his own personality.

The musketeer as a motif has a long tradition in art history and can be found in the work of Frans Hals, Rembrandt Harmenszoon van Rijn, El Greco, Diego Velázquez and Francisco Goya. The musketeer became a symbol for the celebrated artist. By choosing this motif Picasso demonstrates how he includes himself within this tradition of great artists. Amongst the old masters it was Rembrandt with whom he identified most. “Every painter takes himself for Rembrandt” (Picasso, F., Gilot & C. Lake, Life with Picasso, New York, Toronto & London, 1964, p. 51). The bearded man in "Buste d’homme" could easily be a modern relative of Rembrandt’s 17th century portraits. In his late self-portraits as well as other subjects Picasso depicts the ageing artist, just like Rembrandt did. As such they become, in a wider context, metaphors for painting itself.

The curly haired and bearded man in "Buste d’homme" also bears a resemblance to his own father, an artist too, and whose influence had cast a long shadow over Picasso’s life.

Although the later portraits’ historical references are clearly expressed, the speed and the spontaneity of the painting simultaneously share an affinity with abstract expressionism. Instead of becoming absorbed with perspective or human anatomy his portraits focus on particular details that fascinated him, which are often then enhanced for comic effect. The process of creating was more important than the result. Picasso observed that he had reached a stage in his life when the movement of his thoughts were of more interest to him than the thought itself.

In "Buste d’homme", just like in many of Picasso’s later works, what shines through is his passion for painting, the passion to paint without holding back or reflecting too much on the motif.

Although well aware of his own ageing and his dwindling powers, Picasso's musketeers still demonstrate a strong lust for life.

The boasting Musketeers from Dumas’s novels are transported into the modern era with Picasso’s paintings. During the 1960s USA had intensified their military efforts in Vietnam and, in what became known as the Prague Spring, Soviet troops invaded Czechoslovakia. Picasso’s seemingly backward-looking, nostalgic and humorous portraits of musketeers, showcasing different sides of himself, are also contemporary observations on a political situation and on the grandiose self-images and ambitions of the men in charge. Even though the musketeers are soldiers Picasso portrays them without weapons, making them appear harmless and sympathetic. Furthermore, his subjects’ old-fashioned costumes and hairstyles were an allegory for how out-dated and futile he thought war was.

Picasso’s various musketeers allow us an insight into his own personality. Each figure represents different characteristics: one you had to watch, the second might play a trick on you, the third could be particularly arrogant, whilst the fourth you felt sorry for because he was an artist. The different personalities of the artist is the recurrent theme in the musketeer portraits. It was an attempt to regain control and confirm his talent and skill at this late stage of his long and successful life. 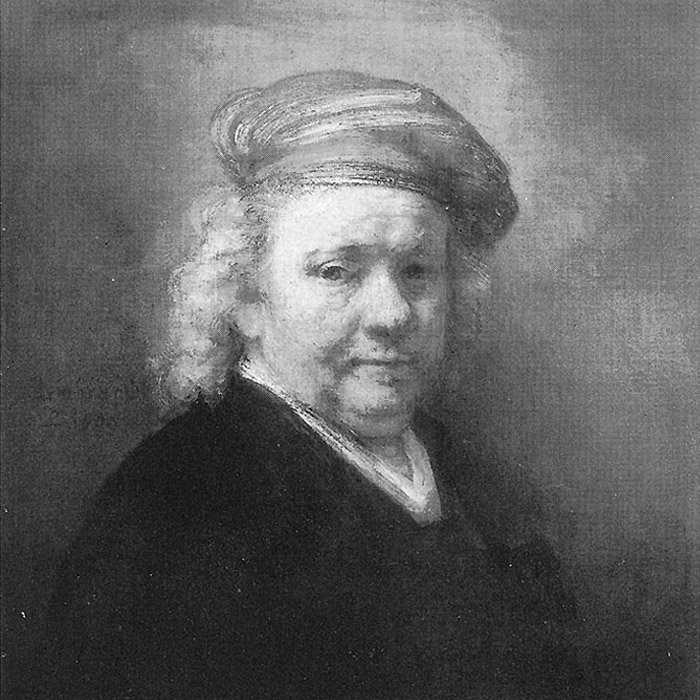 Rembrandt. Self portrait at the age of 63.
Mauritshuis, Haag. 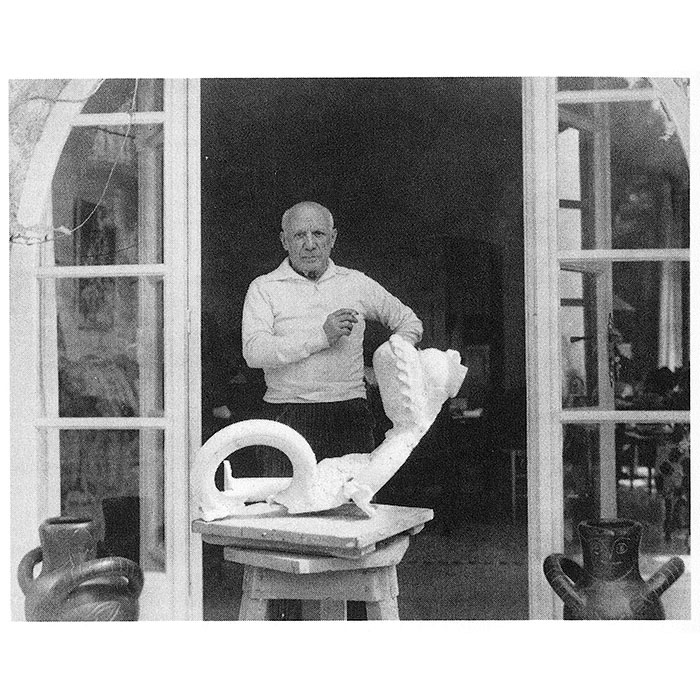 Picasso in his villa “Notre-Dame-de-Vie” i Mougins. 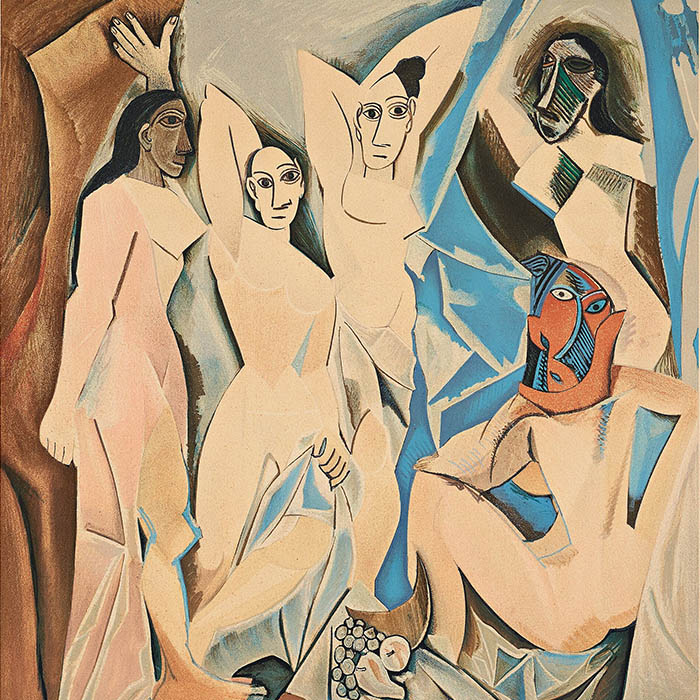 See all objects by Picasso at Modern Art + Design >