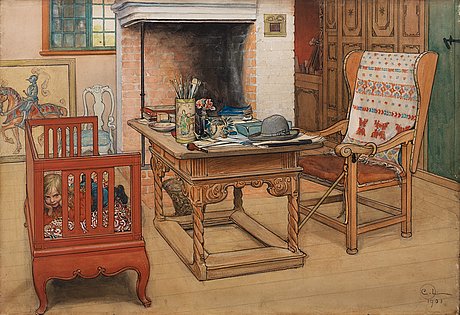 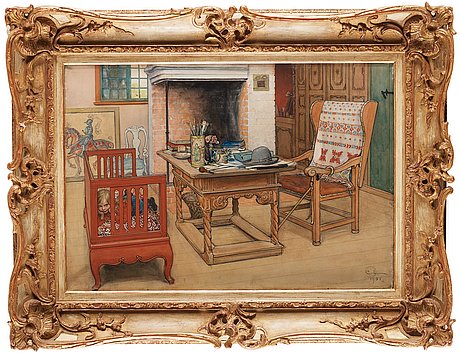 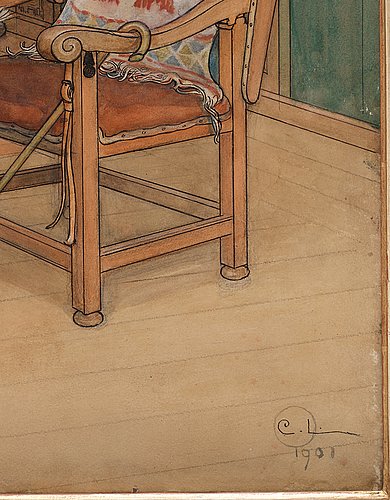 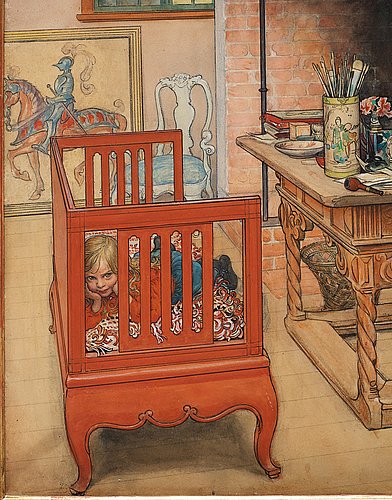 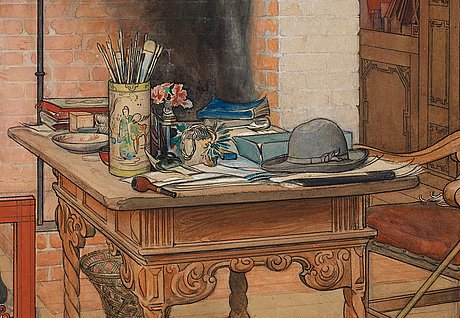 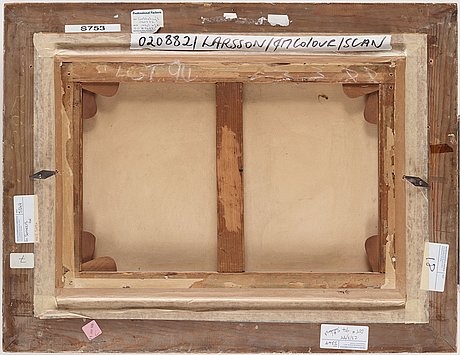 Carl Larsson was a leading member of the progressive generation of Swedish artists who sought to bring fresh life to the art of their homeland in the 1880s and ‘90s. Although his gifts as a mural painter led to important and lasting public commissions in Sweden (for example the grand entrance hall and staircase at Nationalmuseum [National Gallery of Art], Stockholm), he is best known and loved for the special quality of the paintings he made –mostly in watercolour, a medium of which he was a master- of the life of his family in and around their country house in the village of Sundborn.

This house stands today as an internationally unique early example of the Arts and Crafts style in cottage architecture and interior design.
Inspired by the beautiful country home he and his wife designed together, Carl Larsson created paintings of compelling artistry and unique charm that have earned him continuing admiration far beyond his native Sweden. As the “illustrator of his own life”, he developed a distinctive style combining a precise flowing line, fresh yet subtle colour, and a strong sense of decorative design into which the intrinsically appealing figures of his beloved wife and seven adorable children are integrated. Rarely has the visual fabric of domestic life been so richly celebrated as in the internationally sought after work of this extraordinary artist.

“Peek-a-boo” was painted in 1901, which turned out to be a remarkable year for Carl Larsson. In the beginning of the year Carl Larsson had been awarded “La Croix de Chevalier de l’Ordre National de la Légion d’Honneur” (Knight’s Cross of the French Legion of Honour) by the President of the French Republic. At the end of the year, in December, he would also be awarded a gold medal by the jury presiding over the International Art Exhibition in Dresden, Germany.

On a personal level, and possibly more important than all the international awards, was that Carl Larsson and his extensive family moved permanently to their ever expanding country house in Sundborn in March 1901. Here Larsson immediately started painting some of his most beloved pictures like “Till en liten vira/Before the Little Card Party” (oil on canvas, 68 x 92 cm, 1901), today one of the most popular paintings in Nationalmuseum (National Gallery of Art), Stockholm.

There are strong resemblances between “Before the Little Card Party” and “Peek-a-boo”. Both pictures show the Larsson family’s love of green and red colours in interior design and Larsson also revels in the rendering of sumptuous detail, celebrating not only the rooms in themselves, but also minutely depicts all the ornate objects in the rooms.

“Peek-a-boo” shows Carl Larsson's studio in Sundborn before the wall to the long corridor was erected, and before the fireplace was completed. Larsson's youngest daughter, Kersti (born in 1896), is on the bench to the left (possibly in the middle of the little game after which Carl Larsson named the painting). In the background is a study for “Gustav Vasa's Entry into Stockholm”, executed for the staircase of the Nationalmuseum (National Gallery of Art) in Stockholm, the pendant to Larsson's “Midvinterblot”. The furniture can still be seen today at the Carl Larsson-Gården in Sundborn.

Frithiof Hellberg, founder and owner of the Swedish Magazine "Idun", purchased the work from the artist in 1901. He received permission to make colour lithographs of this work under Larsson's supervision for subscribers to "Idun". As a result, it is one of Larsson's most well-known and loved works, painted in blissful happiness in the new home of the artist and his family.

Please note that on this lot there is a security interest with a Third Party.