No connection to server
We use cookies to provide the best possible customer experience. If you continue you accept this use of cookies. Go here to read more.
OK
Contemporary Art & Design 602 Stockholm165167
166
960510 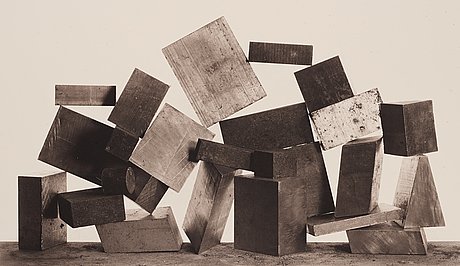 On November 3 2010 Elisabeth Biondi wrote an article in The New Yorker on Irving Penns "Collapse" photographs exhibited at the Pace/MacGill Gallery:

"Perfection is the word that comes to mind whenever I look at Irving Penn’s photographs. Over the past sixty years, he created inspired images of astonishing diversity, but still-lifes occupied an important place in both his professional and his personal work. His flower series are exquisite, his food pictures eccentric, and his cigarette-butt photos eye-opening.
In the late seventies and early eighties, while doing ravishing fashion photography for Vogue magazine, Penn embarked on a series of still-lifes of ordinary found objects, bones, and skulls. Originally these pictures were not well received, but now they dazzle us with their precision and visual poetry. When I saw them recently at Pace/MacGill Gallery, I marvelled at how delicately balanced each setup was and wondered how he possibly could have kept them from collapsing. In fact, collapse they did at times, but the ingenious Mr. Penn photographed them as they tumbled and titled the picture “Collapse.” Yes, the bones remind me of my mortality, but I found a subtle wit at work as well, in both the titles and images. Even the skulls were inspiring.
The show’s platinum prints further demonstrate the superb craftsmanship Penn so valued; he often spent as much time on printing as he did on shooting.[...]"