We use cookies to provide the best possible customer experience. If you continue you accept this use of cookies. Go here to read more.
OK
Important Winter Sale 621 Stockholm2729
28
1195100
The Carl Linnaeus' writing desk. Swedish Rococo, mid 1700's. 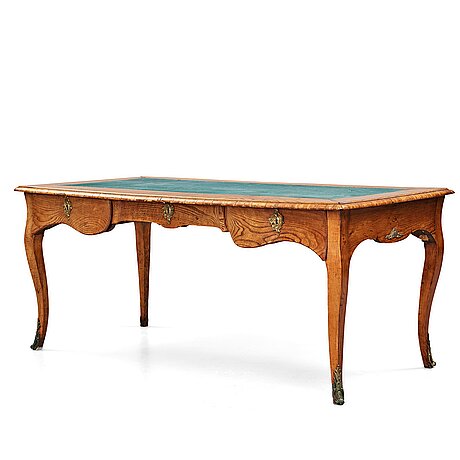 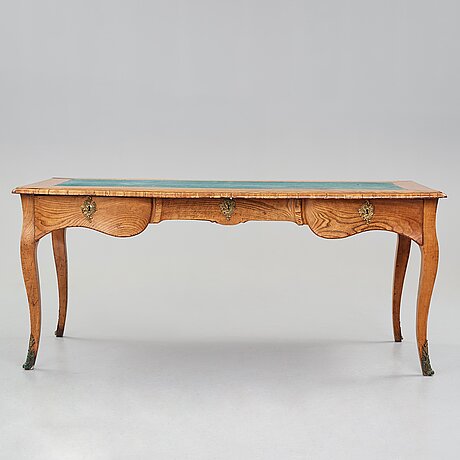 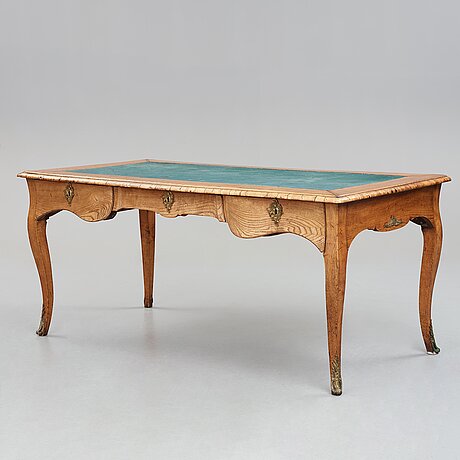 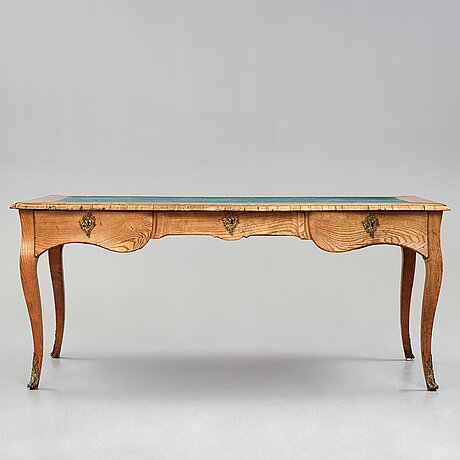 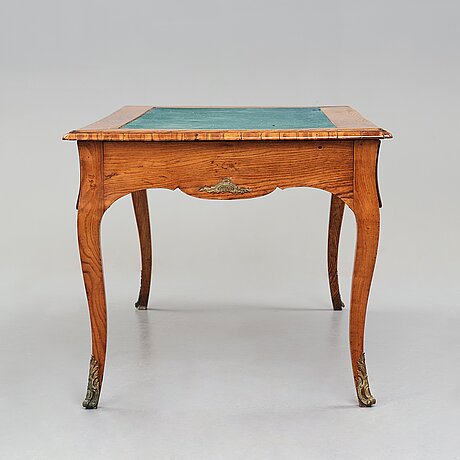 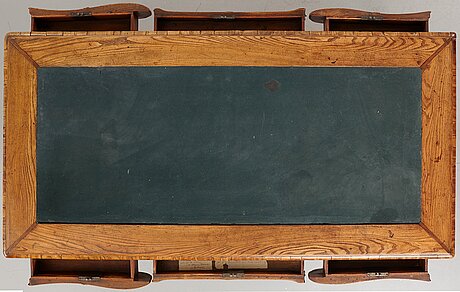 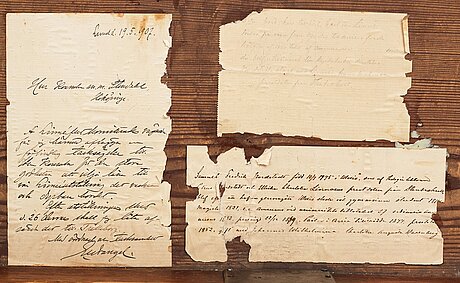 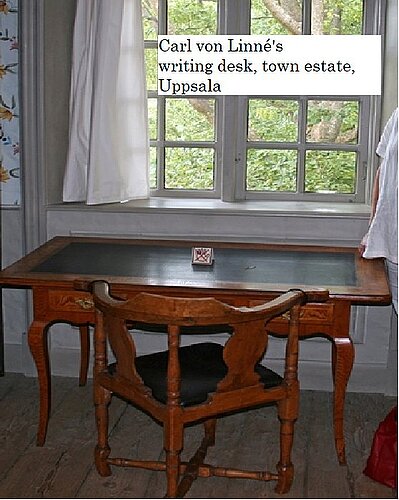 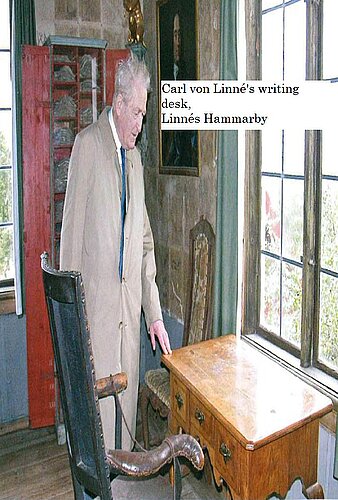 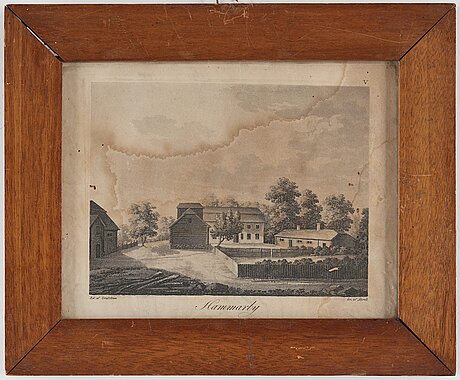 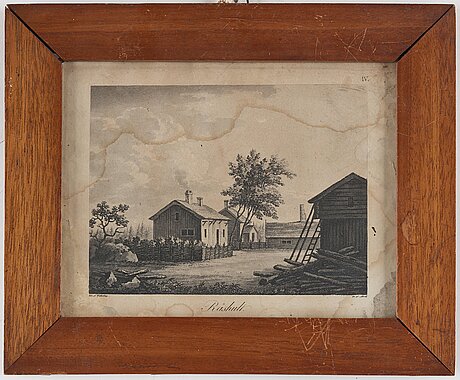 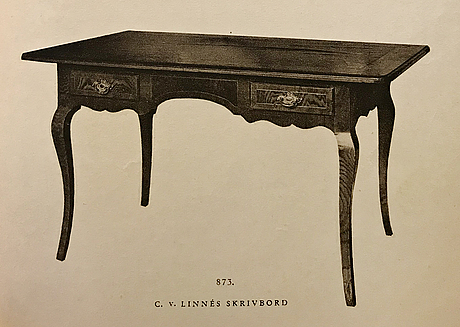 Partners desk. Solid ash and ash veneer, top edges of apple. Brass mounts. Each long rail with three drawers. Length 180, width 90, height 77 cm.
Old notes in one drawer of the writing desk.
In a drawer three glued handwritten paper sheets with texts. Sheet 1: "Lund 19.5 1907 Mr. Consul, etc. Stuchell [?], Hököpinge [south of Malmö]. On behalf of Linné..., I hereby give a thanks to Mr. Konsul for the great goodness of lending to our Linné exhibition the beautiful and precious table. After the exhibition ends on the 26th of this month, I will have it transported to Trelleborg. With gratitude... ". Sheet 2: This table belonged to Carl von Linné, was brought on a carriage from Upsala to Arrie [south of Malmö] in the first half of the 19th century by the Amanuens [Samuel Fredrik Nordstedt] ... who was then named vicor there. Nordstedt related to Linné, his mother was a daughter of Stenbrohult. "Sheet 3:" Samuel Fredrik Nordstedt born 10/7 1795 in Wexiö, son of Theologie Nordstedt and Ulrika Charlotta Linnaeus [daughter of Samuel Linnéus (1718-97), who was brother to Carl von Linné (1707-78), she married Peter Nordstedt (1749-1821) in Stenbrohult 1790], Priest daughter of Stenbrohult, [Samuel Fredrik] became after having passed Wexiö school student in 181 ?, degree in 1821, amanuens at the university library -27, regular amanuens 1833, priest 22/1 1839. Vicar in Arrie 1844, prost 1852, married Johanna Wilhelmina Charlotta Augusta Warenberg". Enclosed two prints of Råshult and Hammarby, and a book "Vägen till Linné", Birger Strandell, 1974. Key included.

Hammer price:
920 000 SEK
This item is subject to export restrictions. You can contact the cataloguer for further guidance or read more here

Carl von Linné (1707 – 1778) by repute.
His nephew, from 1842 the vicar of Arrie and Hököpinge:
Samuel Fredrik Nordstedt (1795 – 1861), who moves the desk down from Uppsala to the vicarage.
The writing desk remains at the vicarage by being sold in turn to his two successors
Per Lindner (vicar 1862–1874) thereafter
Georg Erland Psilander (vicar 1875-1907)
Sold in 1890´s at auction by Psilander to inspector Norén in Hököpinge who subsequently ceded the desk to consul Anders Stendahl (1838-1908), Trelleborg, CEO at Hököpinge sugar company.
Thence by descent.

Bukowski's 1922, auction 237, catalog number 873, compares another rococo desk in elm belonging to Carl von Linné, which was sold at this auction together with 24 other Linnaeus objects belonging to the Linné relative Tycho Tullberg. The items were mainly purchased by the Swedish Linnaeus Society, including the desk which today stands in Carl von Linnaeus' house in the Linnéan garden in Uppsala.

The auction's writing-desk link to Carl von Linné is underlined by the fact that the Linnaeus exhibition at Lund University's art museum in the spring of 1907 was organized by Professor Otto Nordstedt. He himself was a Linné descent (like Tycho Tullberg) and the exhibition consisted largely of his own collection. Otto Nordstedt was also the nephew of the church pastor Samuel Fredrik Nordstedt, the one who transported the desk from Uppsala down to Arrie south of Malmoe, which is why he had knowledge of the background of the desk and later provenance.
There are two Linnaeus writing-desks in museum ownership, one at Linnaeus Hammarby and one at Linnaeus' house in the Linnaeus Garden in Uppsala.
Linnaeus' desk at Hammarby is mentioned among the inventories in Tycho Tullberg's Short guide for visitors to Linnaeus Hammarby (1981), page 18 (see picture).
The writing-desk in the house in Linnaeus Garden was acquired by the Swedish Linnaeus Society at Bukowskis in 1922, when Linnaeus objects belonging to the late Tycho Tullberg were sold. He was a Linné descent via Linné's daughter. Tycho Tullberg lent his writing-desk to the National Museum's in Stockholm exhibition of Linnaeus memories May-June 1907. That writing-desk is in rococo and veneered with elm (see attached image from the Bukowsky auction in 1922) and its location today is in Linnaeus' house in the Linnaeus Garden in Uppsala.