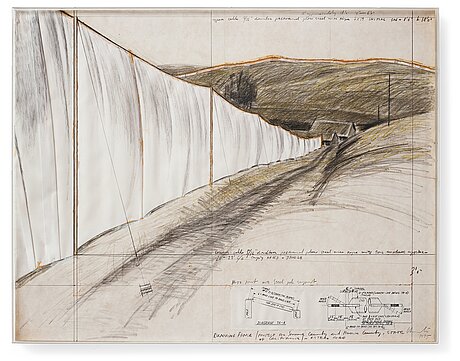 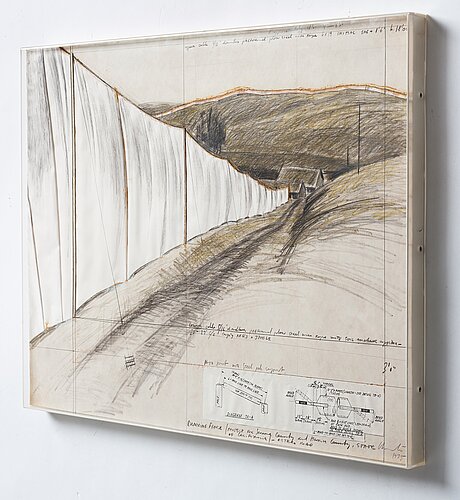 “It can’t be owned or rented or bought. The artist doesn’t get any richer, but you do.” says Jan van der Marck, a long-time collaborator of Christo to the TIME’s reporter, September 1976.
Running Fence, Sonoma and Marin Counties, California 1972-76, is an important and early art project that the artists Christo (1935-2020) and Jeanne-Claude (1935-2009) created together between 1972 and 1976.
Running Fence only existed for two weeks in September 1976, but behind the project lay 42 months of hard work. The monumental piece was constructed from approximately 240,000 square yards of heavy woven nylon fabric, 90 miles of steel cables, 2050 steel poles, 350,000 hooks and 14,000 earth anchors assembled by about 300 students. All parts of Running Fence were designed for removal so that no visible or physical trace would remain in the location.
As in all their artistic projects the artist couple accepted no sponsorship and financed everything themselves through the sale of preparatory sketches and studies, drawings and collages, scale models and lithographs.
“Since 1972, when Christo conceived the project, it has cost him $2,250,000 – raised by selling off his drawings and project studies to European collectors. A sixth of that sum went on fees to a battery of lawyers who, through 17 public hearings and three sessions of the California Supreme Court, won permission to construct the fence and defended it against suits brought by worried environmentalists, who derisively called it ”a roll of toilet paper”. There were bomb threats, and rigging trucks were vandalized.” TIME, September 20, 1976.