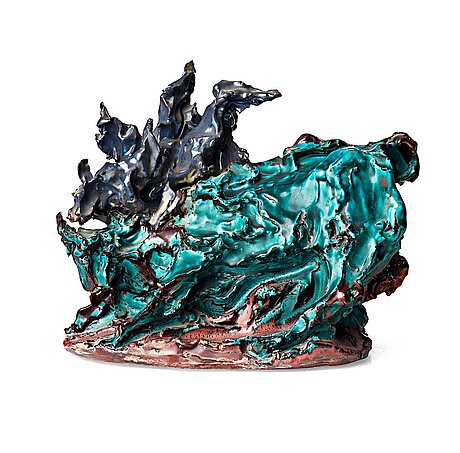 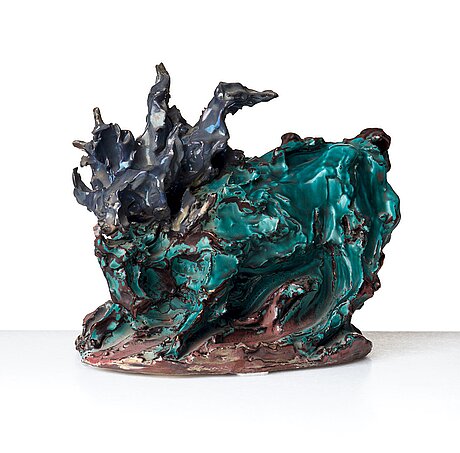 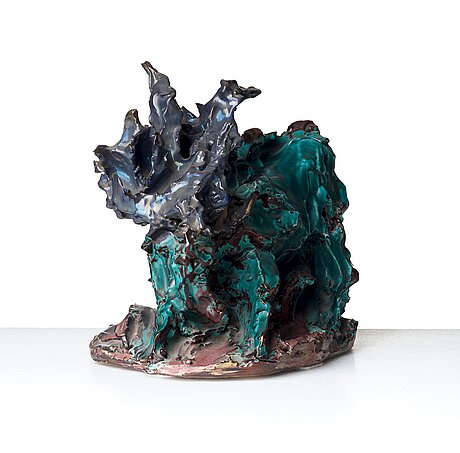 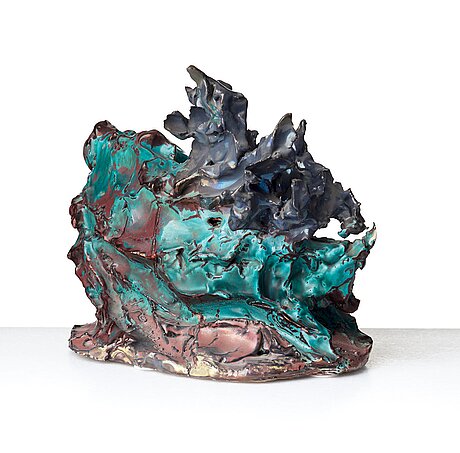 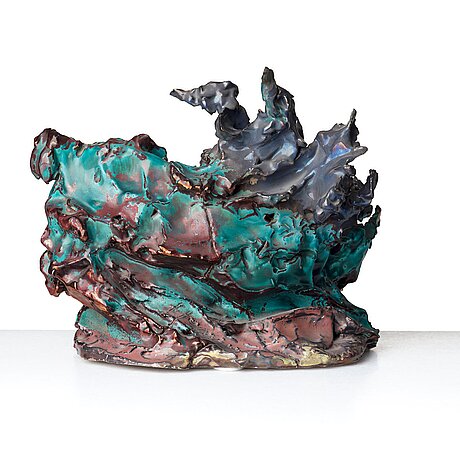 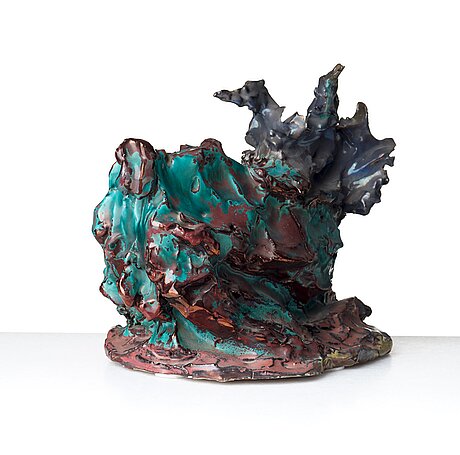 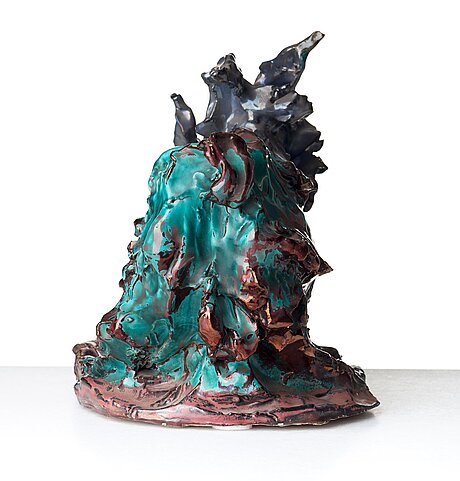 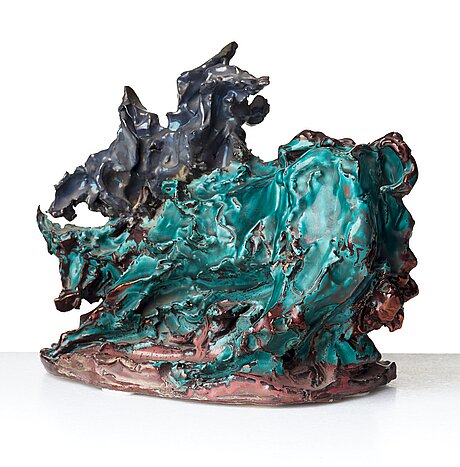 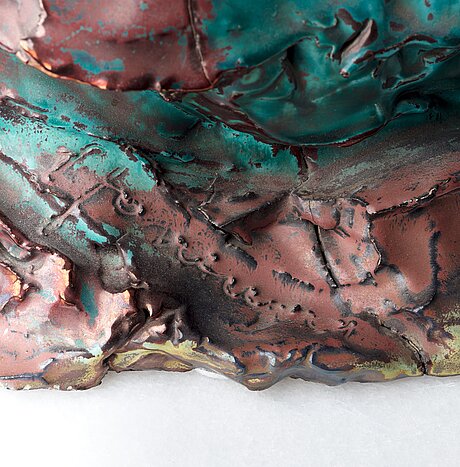 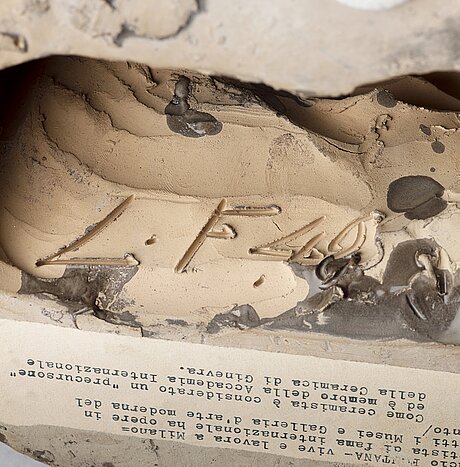 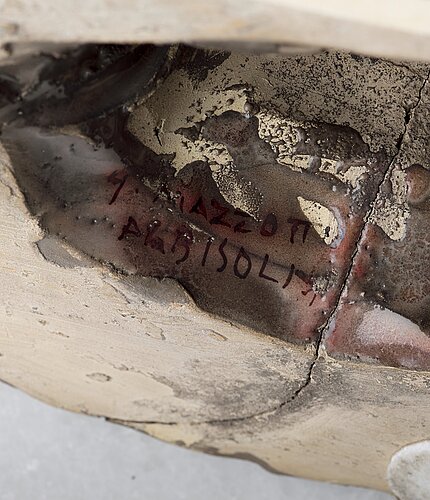 Signed L Fontana. Also signed LF and dated -48 on verso. Glazed ceramics. Height 28 and length 34 cm. A certificate of authenticity executed by Fondazione Lucio Fontana is included with the lot.

During the 20th century advances in science and technology captivated the West, with people following the new discoveries and inventions almost religiously. One of these people, interested in and inspired by science, was the Italian-Argentinian artist Lucio Fontana. He absorbed the new world with its radio, television and above all satellites and space exploration. Fontana’s work is clearly influenced by notions of space, light, time and parallel worlds.

Today Lucio Fontana is mostly known for his minimalist paintings with slashes and perforations, but his early ceramic work played an important role in his later paintings. In his sculptures from the 1930s and 40s he had already begun to move towards a scientific approach, with cuts and perforations being used as marks of space, light and dimensionality. This was an approach he later applied to his canvases.

Growing up Fontana had come into contact with traditional sculpture and liked to experiment as a sculptor with stone, metal and ceramics. During the 1930s he lived in France and was inspired to create expressionist sculptures – he wanted to convey emotions rather than reality. In his sculptural works Fontana returns to the techniques and traditional subjects characteristic of ceramics, such as landscapes, religious scenes, figurative and animal motifs. Fontana attempted to liberate his art from its spatial frames by creating spontaneous expressive movements through well-defined edges. In doing so Fontana highlighted the softness and the versatility of the materials he used.

Up until the 1940s Fontana lived and worked in Italy and France, but at the start of the Second World War he travelled to Argentina. It was in Buenos Aires at the Academia de Altamira that his ideas of ‘Spazialismo’ were born, which came to shape the rest of his artistic career. He created a manifesto, Manifesto Blanco, in which he encouraged artists and like-minded people to abandon traditional and academic notions of art and dare to embrace new approaches and shapes.

A significant aspect of what made him so compelling was his ability to merge sculpture and painting. His choice of forms remained varied throughout his career – from geometrical perfection to shapes that were more difficult to define. It wasn’t about the cuts or the holes in themselves, but about the process of getting there.

Fontana’s contribution to Spatialism, and the innovative forms he used, have inspired a new generation of artists to ‘think outside the box’. Lucio Fontana’s work was a product of its time, regardless of medium or technique.
“Art is eternal, but it cannot be immortal” (Lucio Fontana, The First Manifesto of Spatialism).