No connection to server
We use cookies to provide the best possible customer experience. If you continue you accept this use of cookies. Go here to read more.
OK
Category /
Art
/
ContemporaryLARS NORÉN – THINGS
1331911 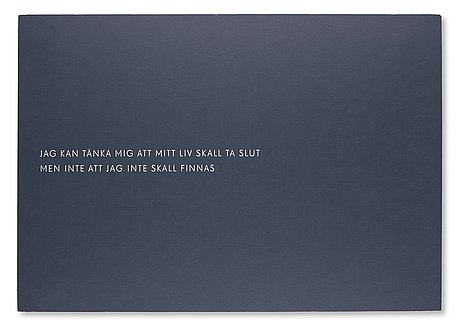 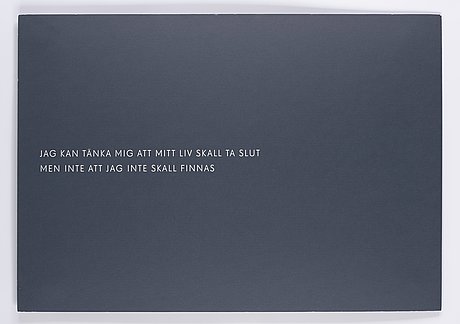 Lars Norén’s FRAGMENT project was shown for the first time at the first edition of Stockholm Literature – Moderna Museet in October 2013.

Sixty–one unique text fragments on posters, designed by Nina Ulmaja and produced by Moderna Museet, were hung all around the public areas of the museum; like traffic signs that could either be read as invitations or could lead to thought and reflection. In conjunction with the literature festival the culture section of the newspaper SvD and its then culture editor Daniel Sandström published their own smaller selection.

In 2015 FRAGMENT was published by Albert Bonniers Förlag (with FRAGMENT II published in 2017) and was celebrated with a release party at the antiquarian booksellers Rönnells with live jazz and a further small exhibition of fragments. Thirty–five fragments had been selected, the design of which Lars and Nina had collaborated on. These were in different lengths, like strips of wallpaper, and were printed in copies of ten for each fragment, with all the 350 posters signed and numbered by Lars.

That same year, the producer Magnus Berg at the Swedish public radio produced and aired a very short program, entitled FRAGMENT, which was billed as ‘the world’s shortest podcast’. At the end of every ‘Sommar’–show that year (an annual show where interesting and/or well–known Swedish–speaking guests create their own 90 minutes long radio programme), you could hear Lars reading his fragments aloud – one per day throughout the summer.

Before this, in 2014, Louisiana Literature had performed a reading of FRAGMENT in Danish, using the excellent translation by Peter Laugesen, with the Danish poets Signe Gjessing, Madame Nielsen, Theis Ørntoft, and Laugesen.

Throughout the years a selection of the fragments have been published in several foreign anthologies and journals. Other artists, from different disciplines, have asked whether they may use the fragments in, for example, their films, performances, scenography and so on. Both volumes have also been sensitively translated by the poet Steinar Opstad into Norwegian and published in Norway by Kolon Forlag (in 2017 and 2020).

Coming back to 2013 – in November that year, after the success of the literature festival, I was contacted by Moderna Museet who wondered what we (Lars and I) wanted to do with the 61 posters that had been on display during the festival. To make a long story short, for a few years I stored all of the posters in my basement and today 59 out of the 61 fragment posters that were shown at Moderna Museet have been disseminated across Sweden and abroad. They can, for example, be found in Eskilstuna, at the Swedish police’s Children’s House (Barnahus) in Stockholm, or at the home of an American artist in West Harlem, New York.

The remaining two, previously in Lars’s possession, are now being offered for sale through Bukowskis.

As I lift my gaze from the computer screen and look at my framed poster that I bought at the release at Rönnells, I read:

To remember is an act.

In connection with the showing at Berzelii Park, 12–17 of October 2021, books and the remaining fragments (the wallpaper pieces), which were produced for the book release at Rönnells in 2015, will be on sale.

Purchasing info
What will the transport cost?