In the fall of 2017 the art work Katarinahissen III was sold for 8 900 000 SEK at Bukowskis. The painting, which GAN started working on in the fall of 1916 in Stockholm, was presented in the groundbreaking exhibition called Sjömanskompositioner at Gummesons Konsthall in Stockholm.

The Roman three indicates that GAN executed two other versions of the motif Katarinahissen long before the fall of 1916. These two paintings are imposed in the catalogue of GAN’s first modernistic exhibition in Sweden, in Lund’s University Art Museum in October 1915, where GAN exhibited together with Einar Jolin. Katarinahissen I and II are included in the exhibition catalogue, though its only been known how Katarinahissen II looked like. This painting (Katarinahissen II) was ”disappeared” for many years and was first shown at Bukowskis in 1998 and later on exhibited in Osnabrück and Lund in 2000, Mjellby Art Museum in 2002 and Prins Eugens Waldermarsudde in 2011.

However Katarinahissen I has been evaded for the public, as well as for the art scientific research, for more than a hundred years and that is why it's a sensation that the art work has yet again appeared as a tremendously important piece of the puzzle, as well as element in this remarkable suite of three paintings, which GAN executed between 1915 and 1917 with Katarinahissen as a common denominator.

Sven-Harry's konstmuseum in Stockholm would like to include this work in the exhibition "Gösta Adrian-Nilsson. Sjömanskompositioner - färgens dramatik och stadens dynamik", 30th of May - 29th of September 2019. 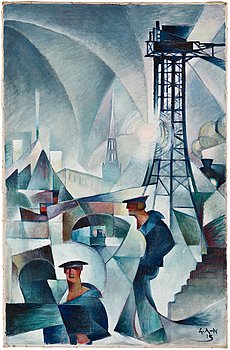