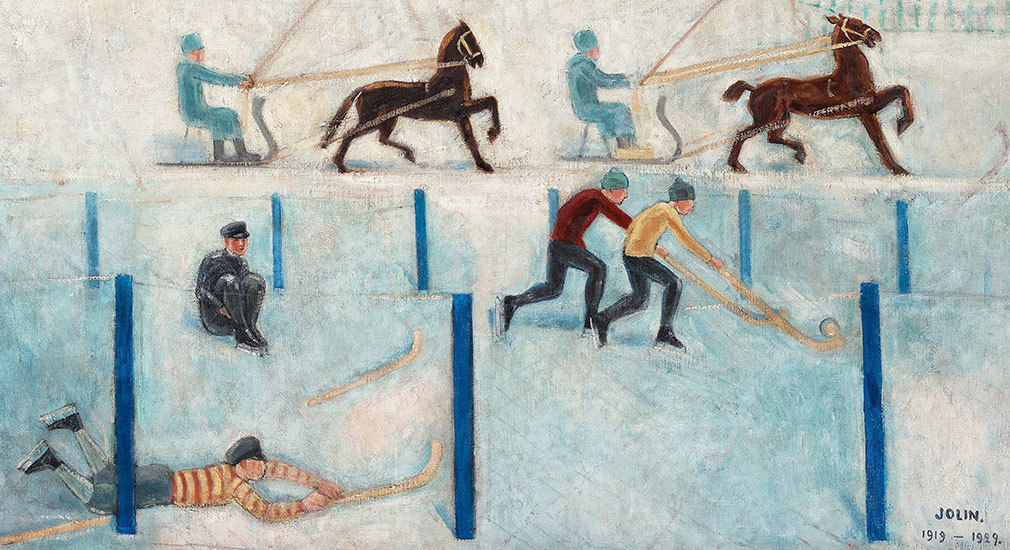 Bukowskis is proud to present a work by Einar Jolin, “Hockey”, at our Important Spring Sale, this spring’s major hammer sale. The painting will be sold on 4 June and will be available to view at Berzelii Park 1 in Stockholm between 29 May and 3 June.

Jolin’s style and naivete is utterly unique. It is as if his reduction on the canvas puts more focus on the most pivotal themes of the subject, whether this be houses on Strandvägen or the low-key nature of a still life.

One of the most central works completed by Jolin in the 1910’s is “Skating rink at Stallmästaregården” (sold at Bukowskis for SEK 2,050,000 in 2009) in which, with a secure hand, the artist evokes the fresh and lively experience of children and adults on a cold, sunny winter’s day in Stockholm. “Skating rink at Stallmästaregården” is one of the spontaneous depictions of Stockholm that emerged shortly after Jolin’s return to Sweden from Paris. It is during this period that Jolin creates his own utterly unique interpretation of expressionism; charmingly naive with a blonde recognizable palette. “Hockey” continues in the same spirit, although the sport being enjoyed is a different one, bandy. In this subject, we see the growing and emerging city as a and the passing train works as a reminder of modernity and helps to create two parallel narratives in the painting. In the lower part we see horses with sledges and, closest to the viewer, a keen bandy game is in progress.

Einar Jolin was a technically skilled artist, but he has also deliberately made errors, all of which contribute towards the naive and incredibly attractive whole. The dating of this painting spans over almost a decade, which shows that Jolin began in 1920 and completed in 1929 when it was transported to the USA and included in an exhibition there. Jolin’s work was exhibited as part of the Scandinavian section at the Carnegie Institute in Pittsburgh in 1930 together with works by artists including Isaac Grünewald, Gustaf Fjaestad, Arvid Fougstedt and Anshelm Schultzberg.

Jolin had several exhibitions at Carnegie Institute between 1925 and 1937. “Hockey” was included in a private collection in the early 1930s and has since then been in the USA. 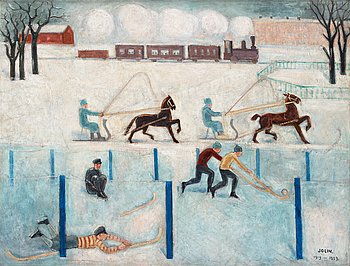