After Stefan Johansson had moved into Älvgatan 7 in Karlstad in 1937, he yet again came close to the Klarälven, where he had grown up. During his remaining eighteen years of life, he regularly returned to his river in his painting during both different seasons and times of the day. In connection with the exhibition at the Värmland Museum in 1943, Nathan Johnson wrote in the Nya Wermlands-Tidningen on February 24: "in the many cityscapes that Stefan Johansson painted over the years – most of which are exhibited here from Karlstad – he cultivates the same interest in the light study as in the interiors. It is lyrical nocturns, played entirely in his own tune. A lonely street lamp in moonlight gives him the opportunity to cultivate an extremely sensitive denomination. Some melancholy pops against a cold spring sky trigger his poetic mood, and the magnificent motif from the West Bridge in Karlstad with the river and an intensely painted evening sky has taken all his ability to synthesize and at the same time deepen the motif ".

Stefan Hammenbeck writes, in regard to the artist's exterior lantern images, the following in "Stefan Johansson. Only time and life suggested":

This method is also mentioned in an article ("An artist for himself") in Dagens Nyheter in 1943 (the same year in which the present catalog number was executed), in which it can be read that: "he usually when he does his beautiful studies of lit street lights stand in a few hours and etch the colors and reflexes on the retina to start painting the subject from memory the next day. 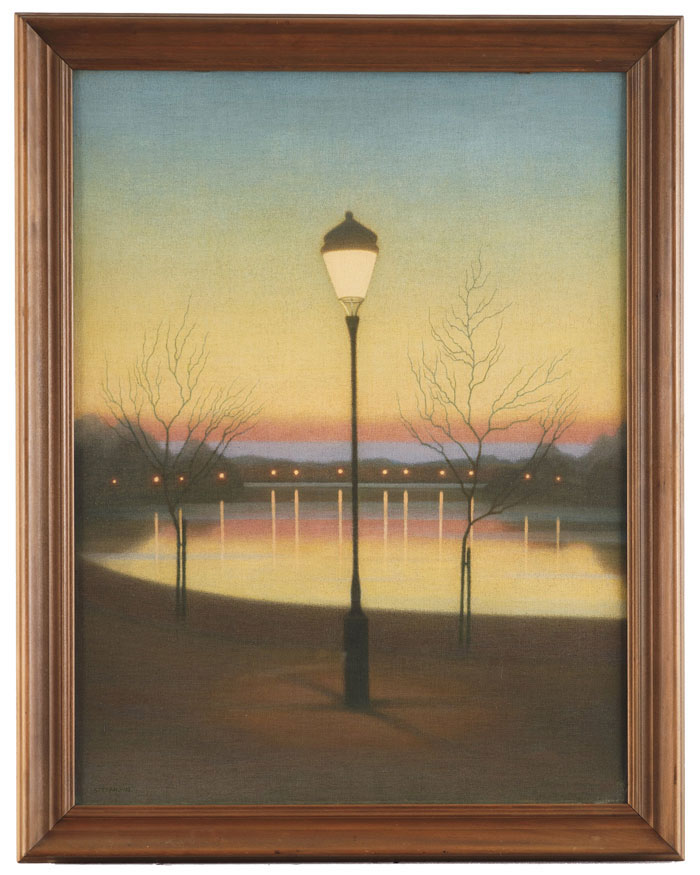 For questions regarding the condition report, please contact our specialists;