Artwork by John William Waterhouse to be sold on 11 December

John William Waterhouse (born in Rome in 1849) had achieved public success in the early 1880s with grand historical compositions such as "The Favorites of the Emperor Honorius" (117 x 202 cm, Art Gallery of South Australia, Adelaide) and "Consulting the Oracle "(119 x 198 cm, Tate, London) exhibited at the Royal Academy in 1883 and 1884, respectively:" If 'The Favorites of the Emperor Honorius' was a notable success, 'Consulting the Oracle' in the Academy of the following year, 1884, brought JW Waterhouse into the front rank "(Hobson, p. 41). These compositions were largely inspired by the slightly older artist Sir Lawrence Alma-Tadema (1836-1912) whose influence on Waterhouse, according to Hobson, culminated in the 1882 "Diogenes" (208 x 135 cm, Art Gallery of New South Wales, Sydney). Waterhouse developed its historic academic painting during the late 1880s in compositions such as "Saint Eulalia" (188 x 117.5 cm, Tate, London) and "Marianne" (259 x 180 cm, formerly in the Forbes Magazine Collection) from 1885 and 1887. The latter composition would mark the end point of Waterhouse as a history painter when he, in 1888, touched on perhaps his most famous motif "The Lady of Shalott":

"Therefore, although 'Marianne' is a major work in every conventional sense -in its size, in its dramatic quality, in the honours it acquired for the painter- it also signifies another step in self-awareness. With singular good sense Waterhouse retired from history painting at the point of his greatest sucess. The year 1888 brought a change in Waterhouse's approach to his painting with the exhibition of the impressive 'The Lady of Shalott', one of his three major pictures based on Tennyson's poem. [...] Apart from the enormous 'Marianne' of the previous year, 'The Lady of Shalott' of 1888 is the largest picture Waterhouse ever painted. It is a reasonable supposition to regard its size as some measure of its importance to him: the same is evident in 'Diogenes' as well as in 'Marianne', both of which mark the culmination of a period of ideas as 'The Lady of Shalott marks a beginning" (Hobson, page 49-51).

The new orientation Hobson speaks of in this context is the tangible element of open-air painting that forms the background foliage in "The Lady of Shalott":

'The Lady of Shalott' of 1888 was his first major exercise in landscape painting of this character. Most of his previous subject pictures had been painted in the studio and were of indoor scenes, like 'Marianne', or had an exterior background drawn largely from the imagination" (Hobson, page 52).

Waterhouse would, based on his stay at Capri in 1890, develop over the next few years his "plein air" painting in motifs such as the present "The Rescue":

”After the 'Ophelia' of 1889, a visit to Capri provided settings of terrace and garden as in 'Arranging Flowers', 'Flora' and 'At Capri' of 1890. He then began to transfer his attention to the Greek legends in 'Ulysses and the Sirens' of the latter year and the 'Circe' subjects of 1891 and 1892. It was therefore for a period of probably no more than three years that Waterhouse devoted himself wholehartedly to the 'plein-air' painting of interior settings, which combined with the firm use of figures had secured approval for the Newlyn School" (Hobson, page 52).

However, the brief, intensive development phase of "plein air" painting was influenced by the death of the artist's father William Waterhouse (also he artist) in 1890: ”How much the passing of his father may have meant to J W Waterhouse as an artist is difficult to say: perhaps little. […] Nevertheless, a perceptible change in his work did occur, and it may be that the death of William Waterhouse aroused deeper and stronger memories than had been evoked by his son’s Italian travels. The ’plein-air’ period came to an end […] and […] there began the notable series of paintings which represent the form of his final creative period. These are pictures in which the setting, however closely dictated by the poet or minutely conjured up through the artist’s imagination, however simple or detailed in execution, is always subordinate to the action and the emotions of the characters portrayed” (Hobson, page 69).

In the future, Waterhouse would continue to work in accordance with the teachings and ideals of the prerafaelites. 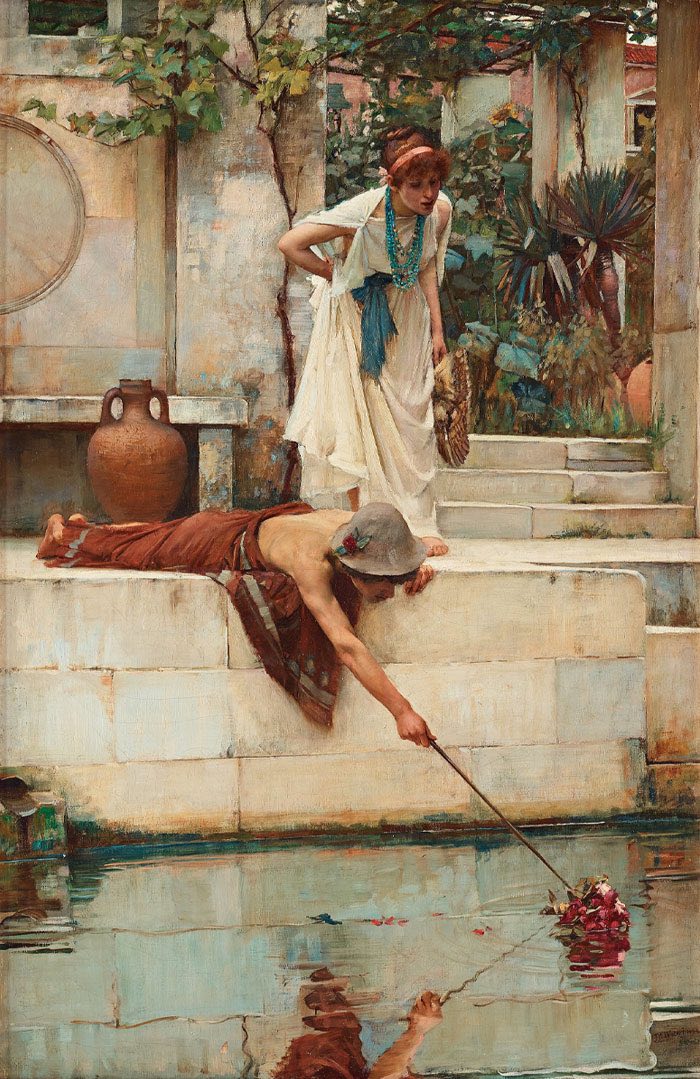