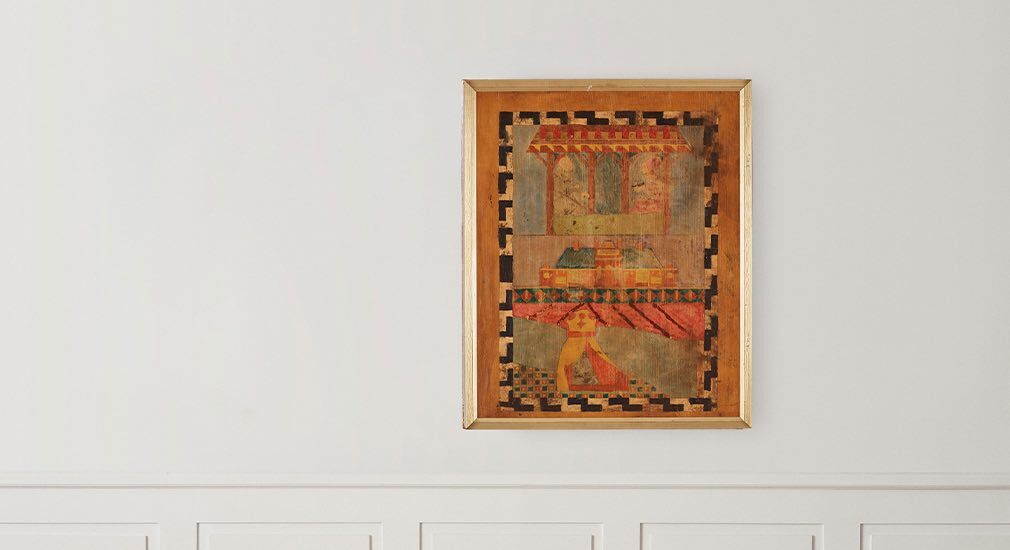 The painting Sommaren 1941 was first shown at Dick Bengtsson’s debut exhibition at Galleri Observatorium in Stockholm during the autumn of 1963. He exhibited a total of eight paintings in the show; the series Oktoberceremoni I-IV and four other pieces executed between 1962 and 1963.

Sommaren 1941 has the distinctive shiny patina that's become the hallmark of Bengtsson’s work. He created the surface by first coating the dried oil painting with glaze. Next he went over the glaze with an iron so as to achieve a blotched, distorted patina before finally varnishing the painting. In this manner he developed a unique style that gives the impression of anything from leather to shimmering gilding. The execution of his paintings was also unusual. The motifs, often found in newspapers and encyclopaedias, were painstakingly traced on millimetre-squared paper, transferred onto panels and then put together into brand new compositions.

In the basic catalogue produced for the exhibition (only consisting of a few typed out sheets) there is an interview with Bengtsson conducted by the gallerist at Bergsundsstrand in Stockholm. Beneath the headline ‘On Form and Camouflage’ the following lines can be read:

"The patina has become a ‘doubleness’ – sometimes it is beautiful but it is always a camouflage. The glaze should not be seen as something decisive, what is important is the representation. A camouflage that is too perfect stops being camouflage. (Pollock camouflaging a desert.)"

The debut exhibition at Galleri Observatorium received a lot of attention in the three major daily newspapers Dagens Nyheter, Svenska Dagbladet and Stockholms-Tidningen. Stig Johansson’s review in Svenska Dagbladet ran under the title ‘A Wayward Debutant’.

Dick Bengtsson did not sell much of his work during the 1960s. Towards the end of the fifties he had begun working for the Swedish postal services as a postman in order to make ends meet. However, his fellow artists admired Bengtsson’s work and a circle of collectors and museum people already began to realise his greatness during his short lifetime and spoke of him as an “artists’ artist”. Even today we still see clear traces of the impact Dick Bengtsson has had on Swedish contemporary painting, sculpture and installation art. Artists such as Ernst Billgren, Karin Mamma Andersson, and not least Cecilia Edefalk all highlight his importance as a source of inspiration for their work. In 1987 Edefalk painted a paraphrase to Bengtsson’s Richard i Paris (1970), calling her monumental painting Dad.

Dick Bengtsson’s position as one of the most innovative and interesting 20th century Swedish artists was publically confirmed through solo shows at the Gothenburg Museum of Art in 2001 and at Moderna Museet in 2006, where the painting Sommaren 1941 was included.

Dick Bengtsson, "Sommaren 1941" is executed in 1962 and will be sold at this spring's auction of Contemporary Art & Design.