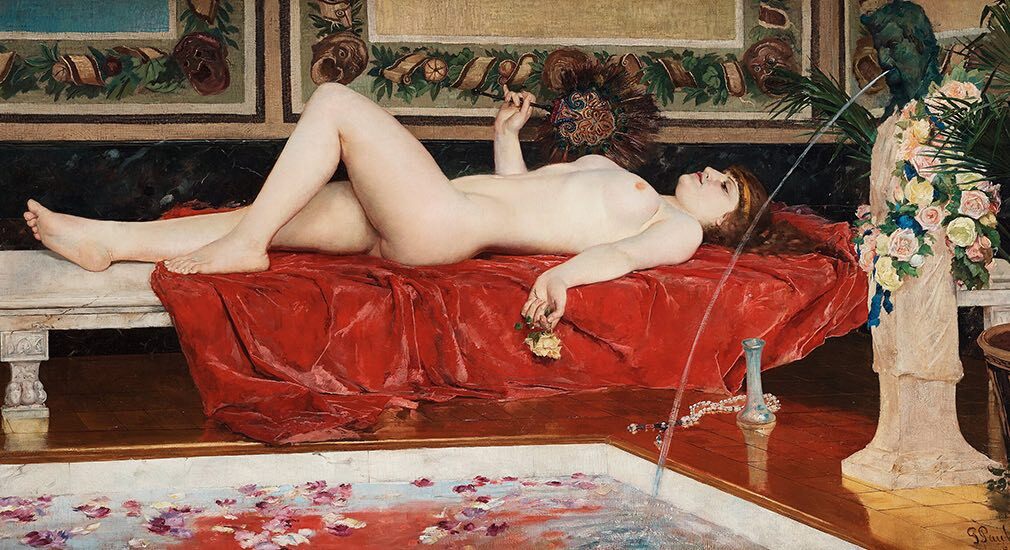 To be sold at Important Spring Sale 3–4 June

At Bukowskis' Classic Spring Auction 2013, the slightly larger variant of Georg Pauli's "Roman Bath" was sold, which was executed in Rome in 1882. The current painting is the original version from 1881, which was also performed in Rome.

Pauli met, during a trip to Venice in 1881, together with artist colleague Carl Skånberg another Swede, tanner Johan Erik Lundin. This one came from Pauli to order one: "a figurative recumbent painting, because it fits best in the place I have vacancy in my smoking room at home" (Georg Pauli, "In our youth", 1925, p. 222). Once again in Rome, where Pauli stayed with the studio, he stepped into the work, creating an environment that was heavily influenced by the time's interest in exoticism as well as the historical environments in which artists such as Sir Lawrence Alma-Tadema and Lord Leighton emerged as the main proponents of the style. He completed the current lot and sent it back to Lundin in Stockholm, but it was not well received when the client felt that it was not suitable for the intended place. Pauli then returned to the sensual environments of the Roman bath to perform the completed version the following year where the bathing woman was joined by a musician slave woman.

In the present original version from 1881 we see how Pauli has been influenced by the ancient architecture but also influenced by his contemporary Swedish colleague in the city, Julius Kronberg, who created several similar studio compositions. Pauli himself writes in his memoirs that he was not much for supplies, something we do not notice in this painting with an abundance of decorations and murals which was most likely a remission for the client. Pauli also writes about how he has in the studio in Rome: “two paintings during work, one an order (incredible but true) by a wholesaler […] who made a visit to my studio. Both represent 'Roman Bath', with gilded floors and rose petals in the water. Kronberg is above me that I should detail ... "(Georg Pauli," My Roman Years ", 1924, p. 217). The red blanket on which the odalisk rests was a loan from Kronberg's studio and the fountain, and the satire is an eye-catcher in both versions of the motif. Although the composition should remind us of the past heydays of the Roman Empire, the salon interiors of the late 19th century shine through with the thick red fabrics, the palm tree and the solar spring. Pauli did not stay long in Italy when he was "perished by thirst in this drought of modern art" (Ibid., P. 215). But what happened to the painting after Lundin sent it back? Pauli gave it to his good friend August Hagborg: "who, after my salon medal in the spring of 1884, made a feast on 'The Corner' with champis and tribute" (Georg Pauli, "In our youth", page 223).

"Romerskt bad"/"Odalisk" (Roman Bath/Odalisque) by Georg Pauli is executed 1881 and signed G. Pauli Roma. Estimate: 1 000 000 – 1 200 000 SEK. The work will be sold at Important Spring Sale 3–4 Juni and on view 28 May–2 June at Berzelii Park 1 in Stockholm, Sweden. For more information about the work, please contact our specialists: