A collection of Danish surrealists

Bukowskis has been entrusted to sell a collection of surrealist art at Modern Art + Design on May 10-11.

The definitive "entrance" of surrealism in Denmark was when the exhibition "cubism-surrealism" was shown in Copenhagen in 1935, where Swedish artists also participated. Although it was ten years after the first surrealist exhibition in Paris, the Danish surrealists were influenced by the same ideas and experimented with the same techniques. Although the Danes had Sigurd Naesgaard as their own psychoanalyst, Sigmund Freud's "Dream Interpretation" from 1899 was something of a bible for them as well.

Many female artists became involved in the art movement, including Franciska Clausen, Rita Kernn-Larsen and Elsa Thoresen. There was a will to overthrow the bourgeois and patriarchal structures. In surrealism, there was freedom and openness that did not exist before.

A collection of Danish surrealists" comes from a private collector and includes 21 objects by Vilhelm Bjerke-Petersen, Elsa Thoresen and Wilhelm Freddie acquired during the 40s and 50s directly from the artists or in galleries at the time.

The American-born artist Elsa Thoresen (1906-1994) was educated at the Academy of Fine Arts in Oslo, Norway and the Academie des Beaux-Arts in Brussels, Belgium, in the late 1920s. In 1935 she married the painter Vilhelm Bjerke-Petersen, and the couple settled in Denmark, where they became part of the Danish surrealist group. As a surrealist, Thoresen participated in the famous and scandalous Exposition international du surrealism in Paris in 1938, where her works got an international reputation. The abstract composition from 1935, an early masterpiece, was reproduced by Sophie Taeuber-Arp in her 1938 journal Plastique.

At the end of 1943, Thoresen and Bjerke-Petersen fled from German-occupied Denmark to Sweden, where they took up permanent residence and, with the help of the Halmstad group's artists established themselves. After the war, Thoresen's art gradually changed away from the figuratively surreal and towards the abstract and more natural lyrical. Her pink, surrealistic landscape from 1946 and the painting Creature are just examples of this new style. With simple and light brushstrokes, Thoresen explains in both works in a complete way what can best be described as sensual and enigmatic impressions, experiences or states.

In recent years, Thoresen's distinctive painting has been the subject of renewed and justified attention. In 2018, for the first time in many years, the audience could see a presentation of her works at the exhibition Women's Surrealism at Kunstforeningen Gl. Beach and Art Museum in Tønder in Denmark and at Mjellby Art Museum in Sweden. Among the works on display was also the pink landscape from 1946. Since then, her paintings have been shown at the exhibition Fantastic Women at the Louisiana Museum of Modern Art in Denmark in 2020 and the pioneers of Modernism at Sørlandets Kunstmuseum in Kristiansand in Norway this year.

To works by Elsa Thoresen 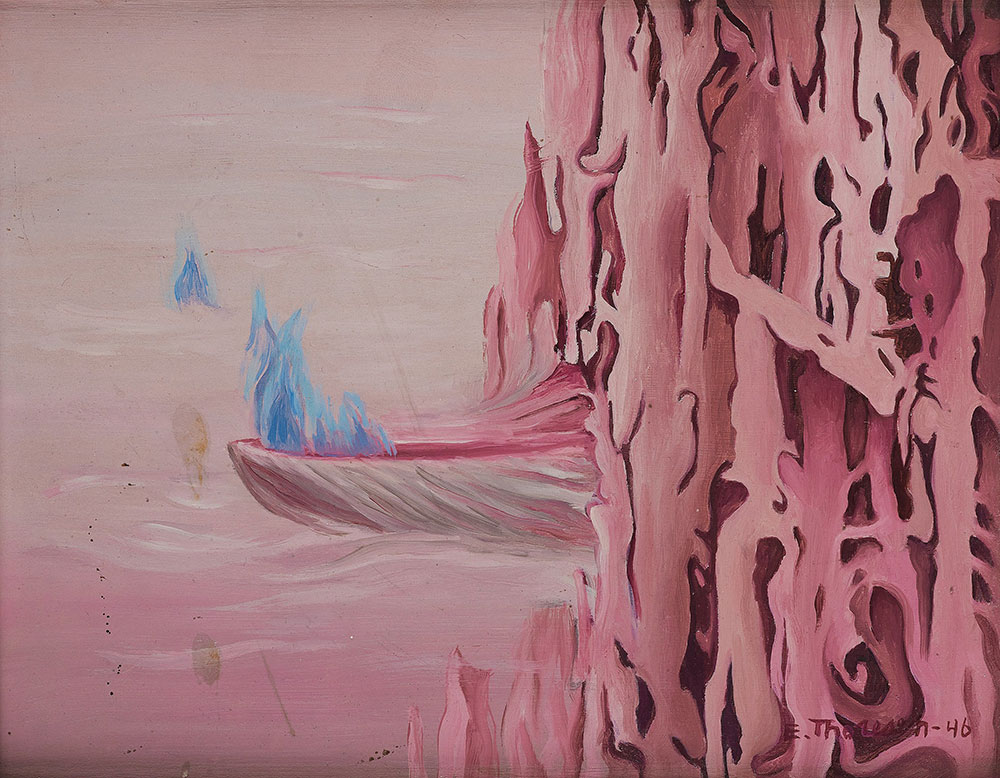 As the only Danish student ever, the artist Vilhelm Bjerke-Petersen (1909-1957) studied for Kandinsky and Klee at the famous Bauhaus school in Dessau, Germany, in the year 1930-31. His art theoretical knowledge made him a leading figure in modern and abstract art in Denmark. Bjerke's artistic range was extensive, and as a full-fledged surrealist, he created in the 1930s an impressive international network of colleagues throughout Europe. His contribution as an artist as well as an organizer of exhibitions and magazines was crucial to Danish art life.

As an artist, Bjerke-Petersen participated in the significant surrealist exhibitions in Europe in the 1930s and 1940s, and his paintings, like his colleague Wilhelm Freddies, were seized in 1936 by the English customs authorities, who considered them to be offensive. In addition, he exhibited at the MoMA Museum of Modern Art and the Museum of Non-Objective Art, the current Guggenheim Museum, in New York.

In 1943, Bjerke-Petersen fled to Sweden with his then-wife, the artist Elsa Thoresen. Here he initially continued his surrealist work but soon began to move artistically in the direction of more abstract imagery. The movement away from surrealism and towards abstraction with the clean, tight lines can be seen as a smooth transition and can be read in the collection of paintings from the years 1943-1949 offered here, from the large and delicate silhouette painting over the dark canvases, among other things with a woman's sensual lips and body, to the pure abstraction in "Erövring av rymden" from 1949.

Typically for Bjerke-Petersen, he did not allow himself to be limited by materials and expressions. The auction's ceramic dish from his collaboration with the factory Rörstrand in 1951-52 shows an artistic crispness that he was effortlessly able to transfer to the clay.

In the autumn of 2020, the first retrospective exhibition in Sweden in recent times with Vilhelm Bjerke-Petersen's work could be experienced at Mjellby Art Museum. 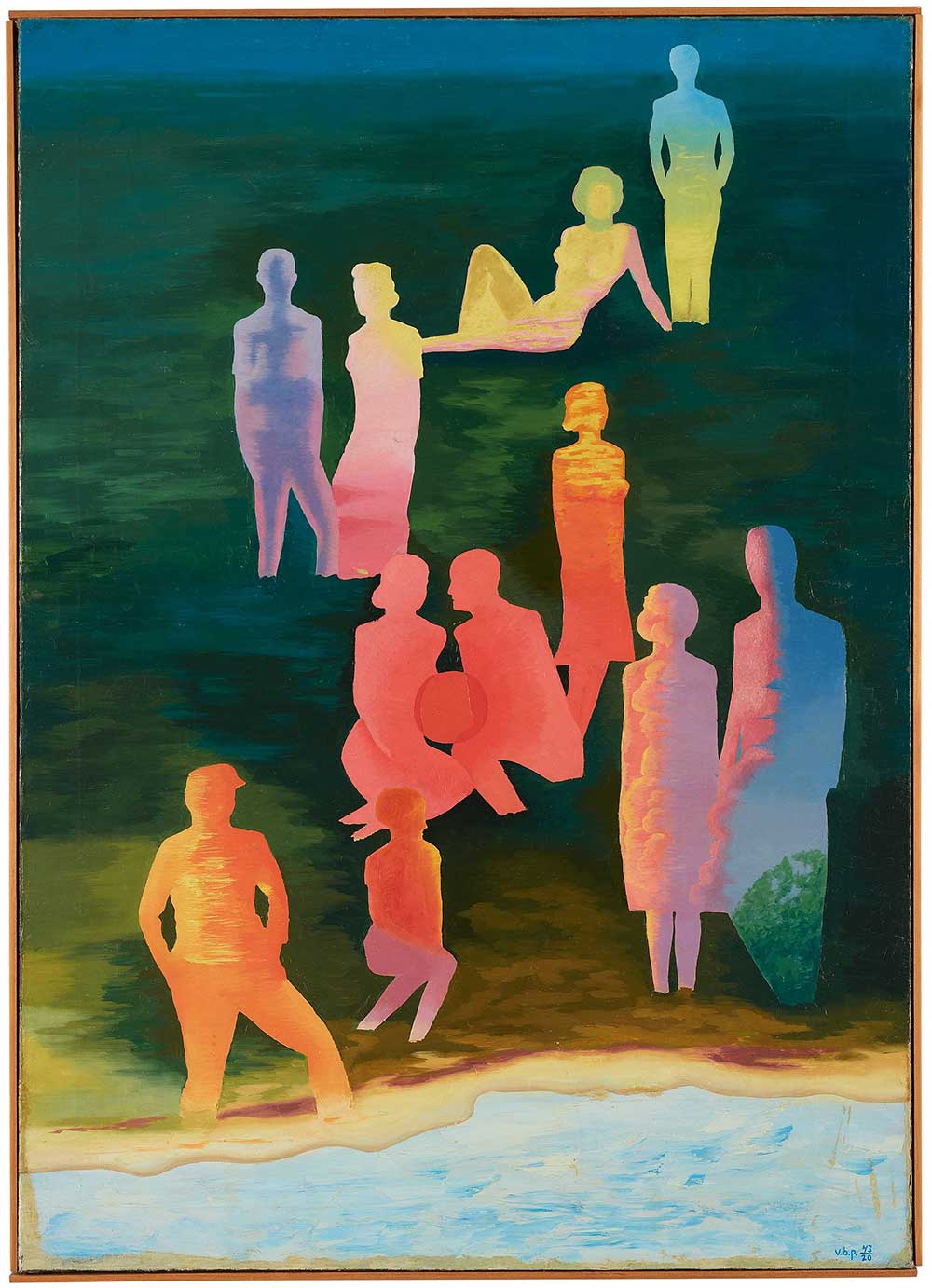 It is not without reason, the Danish artist Wilhelm Freddie (1909-1995) is considered the enfant terrible of Scandinavian surrealism. The scandals involving police seizure of his surrealistic works of art and imprisonment for pornographic activity are well known. Freddie introduced the Danes to surrealism as early as 1930; he participated in the major exhibitions in Denmark and abroad: Copenhagen in 1935, London in 1936, New York in 1936 and Paris in 1938 and 1947.

Equally with his colleague Vilhelm Bjerke-Petersen, Freddie came into the spotlight of the Germans during their occupation of Denmark due to his art and had to flee to Sweden in 1944, where he remained until 1950. After the war, his style gradually moved away from the surreal, the shocking and the macabre, provocative towards a more material, almost carnal, expressive painting, but with a lasting interest in body and anatomy. Freddie was familiar with this particular subject area from an early age through his father's work at the Department of Pathology at the University of Copenhagen.

Freddie's artistic development is evident in the range of the works - from the late surrealist compositions from 1949 to a new and very sensual, almost raw feeling in the works "Nögne og tragiske kroppe" from 1957 and "Nordisk nat" from 1958. The painting "Kvinde, løve, hjul og bouilloner" from 1954 lies somewhere in between.

In the Danish art historian Jens Jørgen Thorsen's publication "Modernism in Danish painting", both "Nögne og tragiske kroppe" and "Nordisk nat" can be seen in a photograph from Freddie's exhibition at Kunstnernes Kunsthandel in Copenhagen in 1959. In his accompanying text, Thorsen describes the exhibition as; "the pictures flew around in the room and had a scent. Each work was named after its perfume".

A slightly more curious feature of the fine collection of Freddie's works is an object without dating and signature. Quite in the spirit of surrealism, Freddie spanned many media, which also included dresses for Carli Gry, scenography, movies, window decorations in department stores, and public decorations. 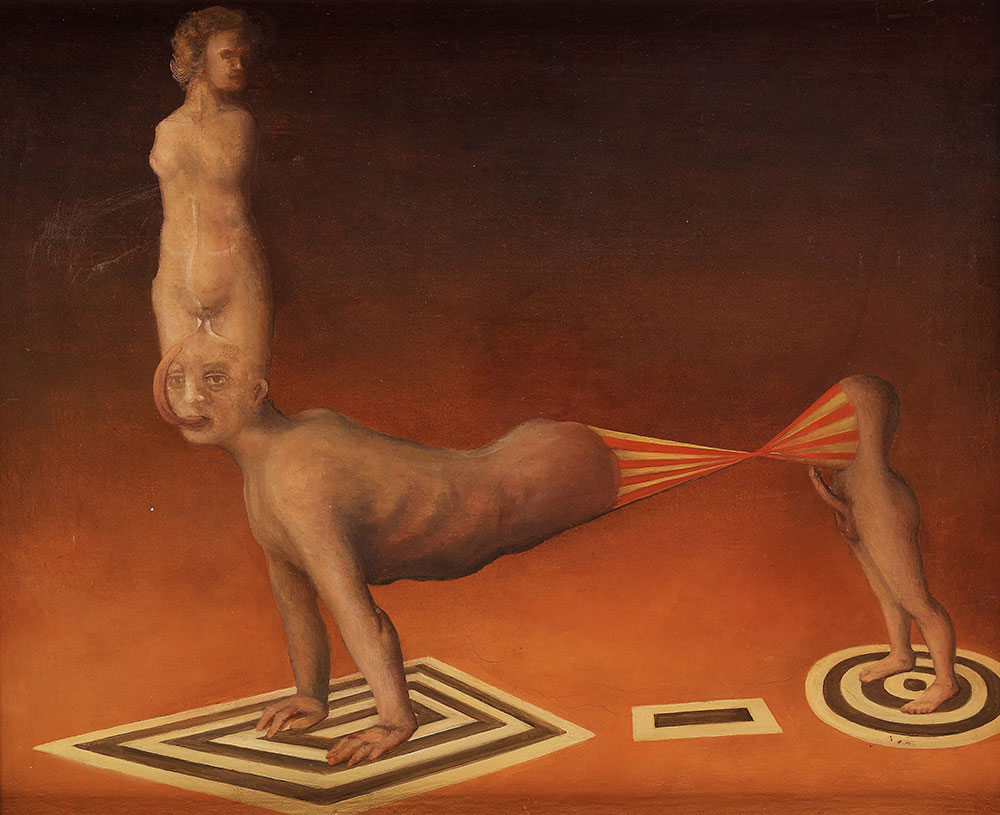