Bukowskis has been entrusted with selling a collection of five works by Einar Jolin at Modern Art + Design on 10-11 May.

In the spring of 1914, Einar Jolin travelled home from Paris to participate in the 'Baltic exhibition' in Malmö, an exhibition with artists from the countries around the Baltic Sea. In Paris, he had studied with Henri Matisse and carried out series of model studies and acquired a spontaneous and natural speed in the brushwork. He planned to return to Paris after the summer, but when World War I broke out, the road to France was closed. Jolin managed to get a small studio on Fiskargatan 9, in the so-called "Skandalhuset" near Katarina Kyrka on Söder's heights.

From his windows, he had a breathtaking view of the city, the stream and the inlet. During the years 1914–1915, some today famous and highly admired Stockholm-views were created in this studio. He divided the view into square after square, either towards Stadsgården, or towards Riddarholmen, including "Strömmen mot Skeppsbron" 1914 (Stockholm City Museum), "Utsikt över Riddarholmen" 1914 (Moderna Museet, purchased by Nationalmuseum 1919) and "Utsikt mot Kastellholmen ”1915 (Herman Gotthardt's collection, today Malmö Art Museum). The paintings are characterized by his fast-sweeping brushstrokes and sharp contours that frame the healthy blonde palette. 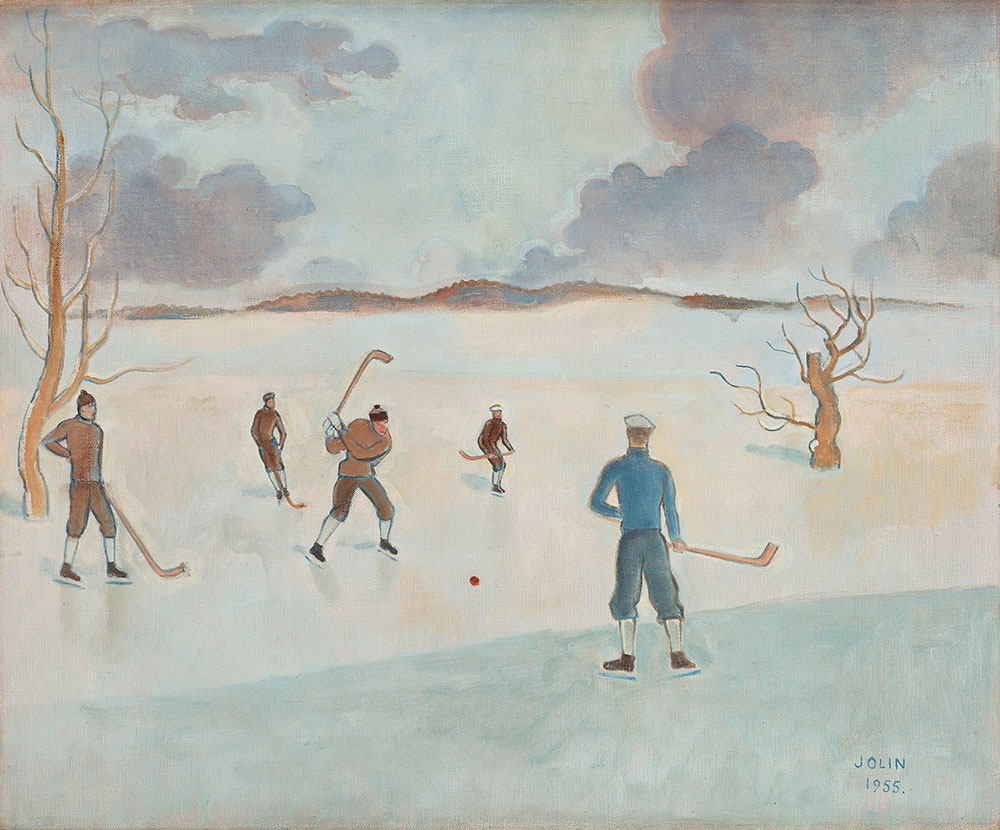 In connection with his retrospective exhibition at Liljevalchs 1957, Einar Jolin himself describes his view of his artistry and the peculiar expressionism that he developed and came to hold on to with the words:

”The thing I want to express in my art is what I have experienced during concentration and immersion. There is an everyday view - man has named everything that surrounds him in life, and because of this he finds everything obvious and does not see the miracles. Art, as I understand it, is to give shape to the wonderful in life, to create beauty and harmony, to be able to lift the sensitive spectator from the trivial everyday life into the beautiful and incomprehensible world we live in. If I have succeeded, I have perhaps not lived in vain” 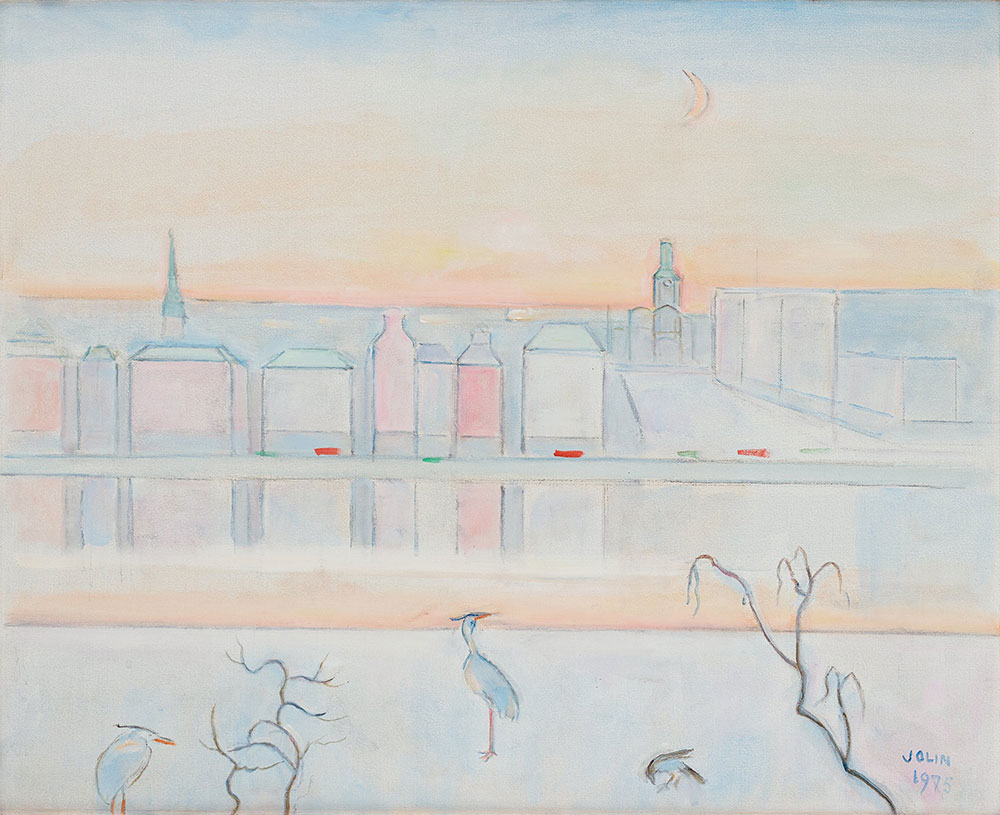 Jolin became the Stockholm painter above others. The city's exteriors remained his own Arcadia throughout his life. Whether the city bathes in spring sun or winter mist, the beauty is untouched. One motif he constantly returned to was the view from the studio at Katarinaberget, always a Sunday-quiet city. In the depiction of Stockholm below, we get to follow the artist's gaze towards the Old Town and Stockholm's castle. Against large flat surfaces in cool pink, thin blue, light violet, he puts black, simplified details in the form of driving cars to create contrast and a feeling of quiet movement. In Einar Jolin's oeuvre, there is a conscious and sometimes distancing view from the artist's side. The motifs can often be described as direct paintings that are depicted, and this simplification and beauty are themes that we see in Jolin's art ever since her studies in Paris with Matisse. 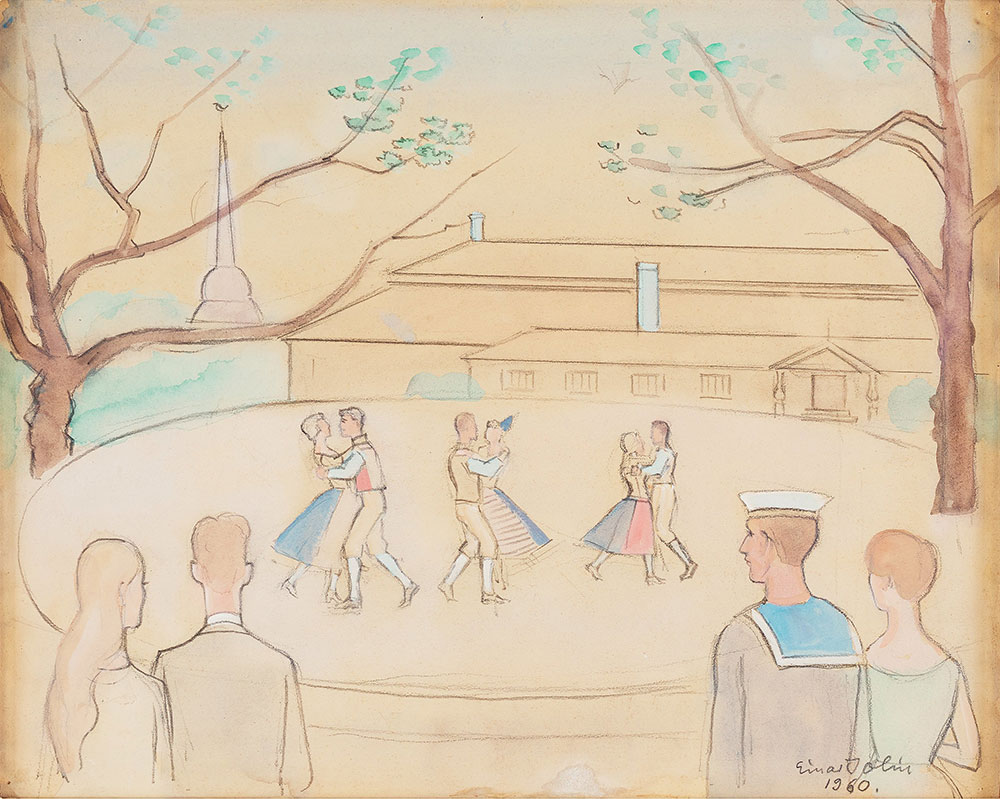