— unique sculptor during the post-war era

Chadwick debuted at the British art scene soon after World War II alongside a new generation of artists. Europe lay in ruins, and the world was in shock after witnessing the horrors of the war, genocide, and the atom bomb’s effects. Chadwick himself served as a pilot in the R.A.F. He had already, when he was young, had a wish to devote his life to art.

His parents disagreed and made him compromise his choice of profession, so he educated himself in architecture. Before the war, he worked as an illustrator at an architecture office. Chadwick didn’t receive any proper schooling in art, and perhaps it’s possible to glimpse the austere geometry in his artistry.

After the war, he was filled with a longing to create, to achieve something new. It took some time before he dared to take the leap and become an artist, so he worked as a successful graphic designer and interior architect for a few years first. During the late 1940s, he made a living designing expo materials, furniture, and wallpaper pattern whilst at the same time working on his art. 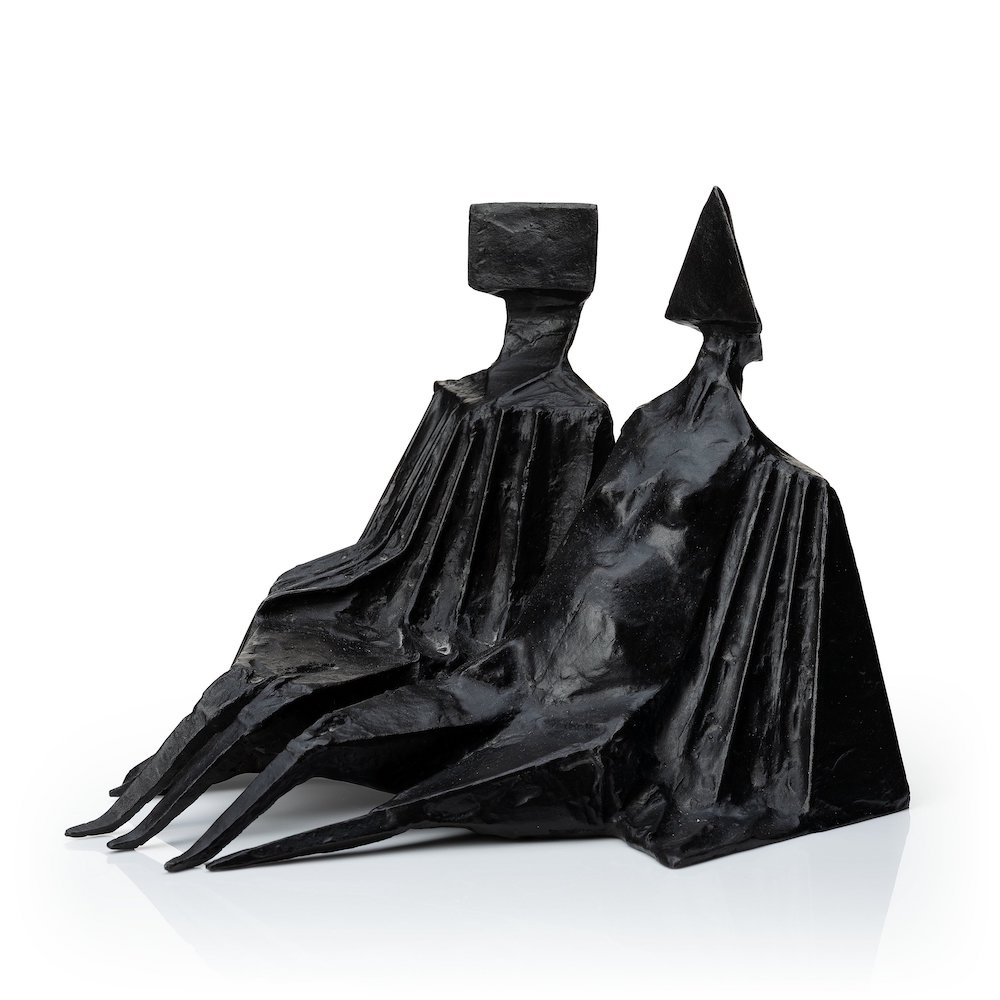 ” But some of us felt after the war that we had to make something and that painting was exhausted as far as this attempt to make something was concerned. Actually, we didn’t – at least I didn’t – think of sculpture as such. We thought of construction, of building with our hands.” 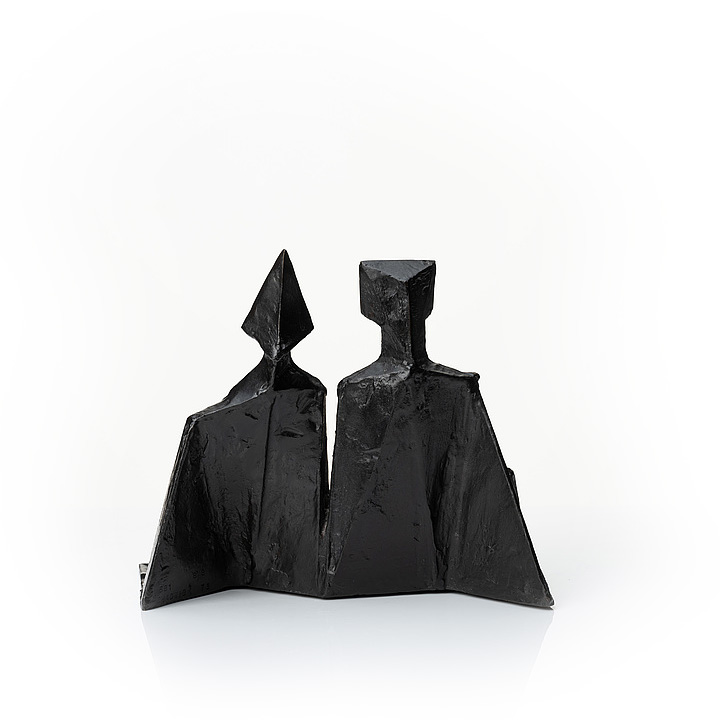 Through the Venice biennials 1952 and 1956, Chadwick got his international breakthrough and has since been one of the most influential artists on the English art scene after the war. The expression in Lynn Chadwick’s sculptures is in the highest degree linked to his method of working. Practically self-taught, he invented his own technique. The method has been described as three-dimensional drawing with metal rods, where Chadwick first bent and shaped the rods to shape and then welded them together. Then he filled the parts that were supposed to be solid. For some sculptures, he used metal sheets, which gave the impression of “metal skin”. It wasn’t until the end of the 1950s that he started to cast in bronze. Chadwick placed great importance on the patina of his sculpture and worked intensively with the surface structure and colour nuances. 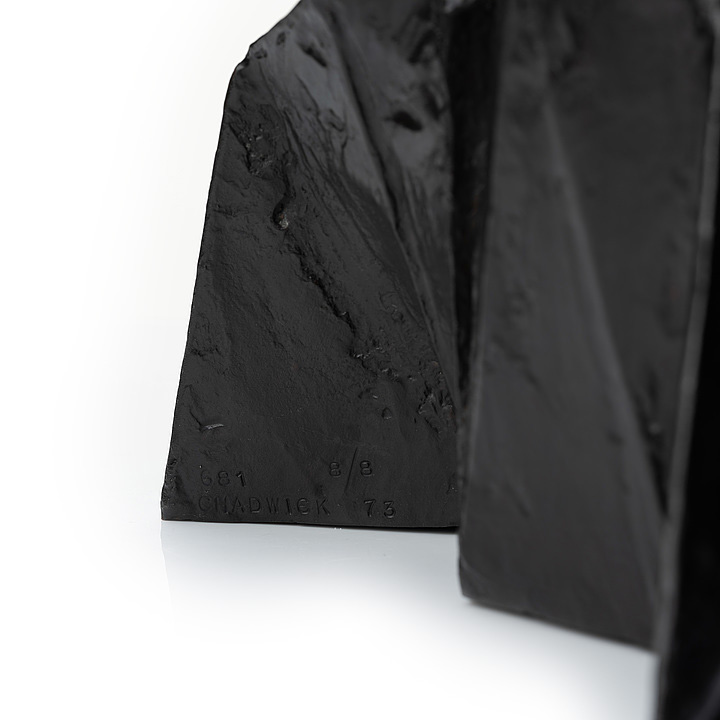 The triangle, in different variations, is the founding geometric shape in Chadwick’s art, sometimes fused into rectangles. This shape, placed vertically or diagonally, rarely horizontally, makes up the base in the sculptures and creates tension between the shapes. The artist himself deemed the triangle was to be seen as the simplest draft of a human or animal figure and that it was from this shape the body was created. He emphasized that he always emanated from the human form in his art.

“ I shall never neglect humanity. Even in my most abstract figure ‘The Pyramids’ I took man as a starting point”. The stars can be seen as heads with a single eye and the pyramids can begin to suggest a figure or beast.” 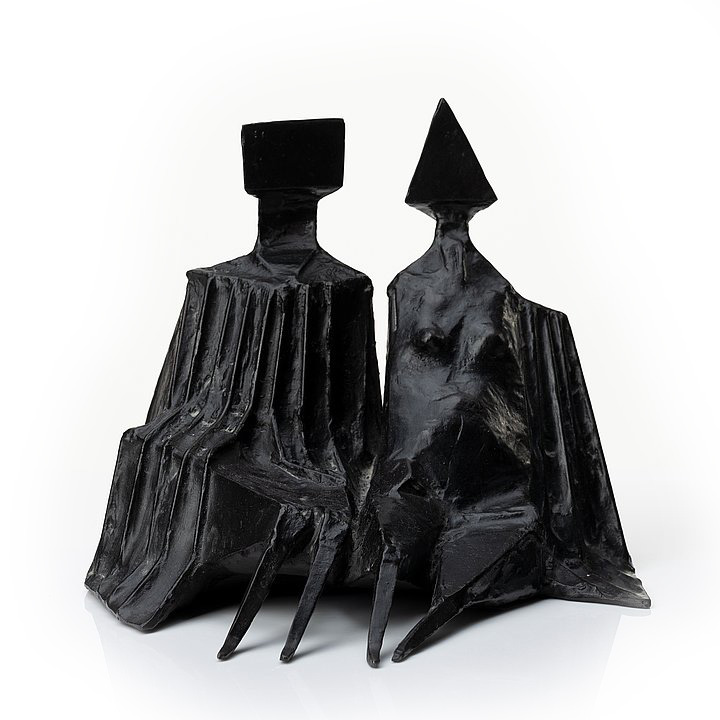 The sculpture in this auction, “Sitting Couple”, is from the artist's 70s production, recognizable through its iconic and mature expression where the shapes have been refined and scaled-down. As viewers, we meet two archetypal and timeless shapes where it’s hard to tell if Chadwick has collected his inspiration from the Neolithic civilization or Jungs teachings about archetypes and the collective subconscious. The figures who populate the artists’ philosophy are hybrids that lend features from humans, birds, reptiles, and insects, which makes us partly identify with them and at the same time fear them. In this group, there are, in fact, only the figures’ faces that say something about them: the square symbolizes the man and the triangle the woman (which is a reoccurring feature in his production).

Chadwick described his art as a dark inner force that manifested itself to the artists and was translated through their ability and skill. What the artist has translated for us viewers, we are free to interpret. 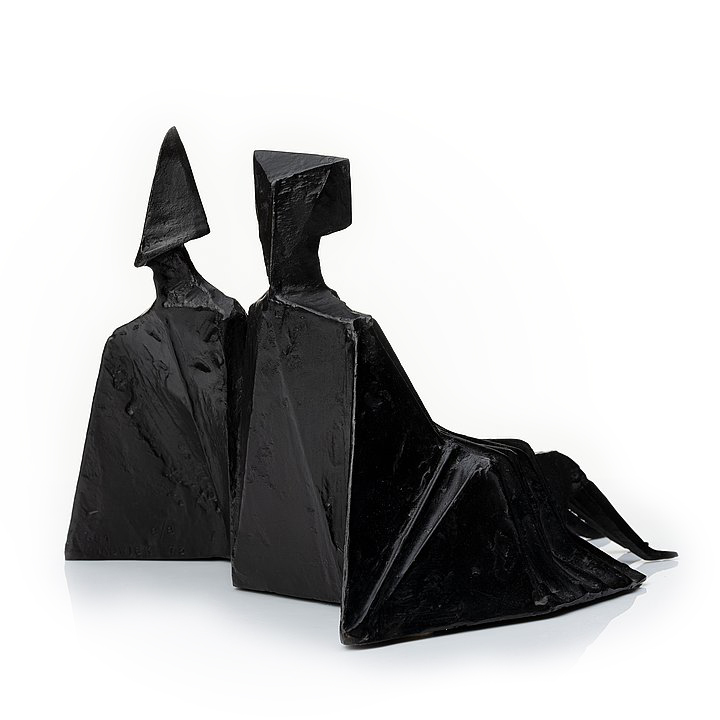