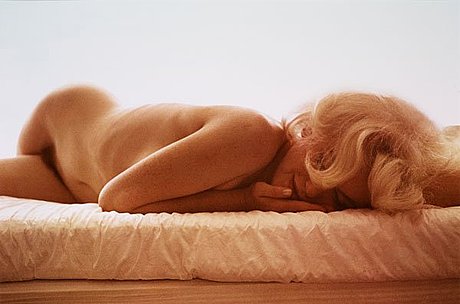 Leif Erik Nygårds remember the time when the current image was captured as follows: ”I had very much wanted to be able to take one photograph of Marilyn so I could prove to my friends in Sweden that I had met her and photographed her. I felt I had a good relationship with Marilyn so I asked her: "Can I take just one frame of you"? "Of course" Marilyn answered. She was sitting on the bed swept in a sheet, just her head sticking out. She looked like a mumie. Though it would be a good picture. So I turned around to pick up my Leica from my camera bag. When I turned back Marilyn had released herself from the sheet and laid on the bed totally nude. My first thought was "I can´t show this photo to my mother", I was somewhat shocked, it was not exactly the picture I had in mind a few seconds earlier, but you don´t argue with a megastar, so I tried to stay cool, connected my camera to the synccord and took this photo of her. After the flash went off, Marilyn lifted her head somewhat and smiled; a real human smile. I wish I had gotten a photo of that as well, but I had already pulled the synccord so that picture was for ever gone. I still think it wasn’t Marilyn Monroe I photographed it was Norma Jeane Baker. ”