When Leander Engström was 14 years old, he worked as an assistant at a local newspaper in the north of Sweden, Sundsvalls Tidning. There he met the artist Helmer Osslund and joined his group of amateur painters. This was a decisive turning point for Engström who went on to apply to Konstnärsförbundet’s art school in Stockholm where he met Isaac Grünewald who persuaded him to go to Paris in 1908 to study with Henri Matisse. Engström was taken by the new expressionist movement vibrant in the artistic circles of Paris life and it came to deeply influence his work.

In 1912 he returned to Sweden to be engaged to Maria Edlund, his future wife. His landscapes gave way to nude studies and sensual art works most likely inspired by his young wife. The couple finally settled in Stockholm, married and moved into a small house at Manilla, Djurgården where their twins were born. The beautiful surroundings and the nature of Djurgården are evident in Leander’s paintings from this period. His style is elegant and independent in a cool colour scheme of whites, blues, greens, carmines and pinks.

This happy time coincides with artistic success. Leander is one of the founders of the young “Expressionists”, a group of artists who exhibited together at the Baltic Exhibition 1914 in Malmö. The group consisted of the young artists Leander Engström, Isaac Grünewald, Sigrid Hjertén, Nils Dardel and Einar Jolin. Their “Expressionist” show was finally well received by the press, the group being harshly criticized initially.

Leander Engström was inspired by the teachings of Henri Matisse. “Suppose I want to paint a woman's body: first of all, I imbue it with grace and charm, but I know that I must give something more. I will condense the meaning of this body by seeking its essential lines. The charm will be less apparent at first glance, but it must eventually emerge from the new image which will have a broader meaning, one more fully human”. (Notes of a Painter, in La Grande Revue, 1908)

In the painting ”Nymph” from 1915, offered at this auction, the lovely nymph is placed against the sharp diagonals of a mountainous northern Swedish landscape. The artist uses his exceptional sense of colour and shape to offset the cool, elegant composition with energetic bursts of red, blue and green.
“The nymph” is one of very few known works by the artist from 1915. Apart from “Berglandskap, Bardodalen” in the collection at Prins Eugens Waldemarsudde, and ”Vid fjällbranten” in the collection of Moderna museet, Stockholm, there is only a small number works in private collections. 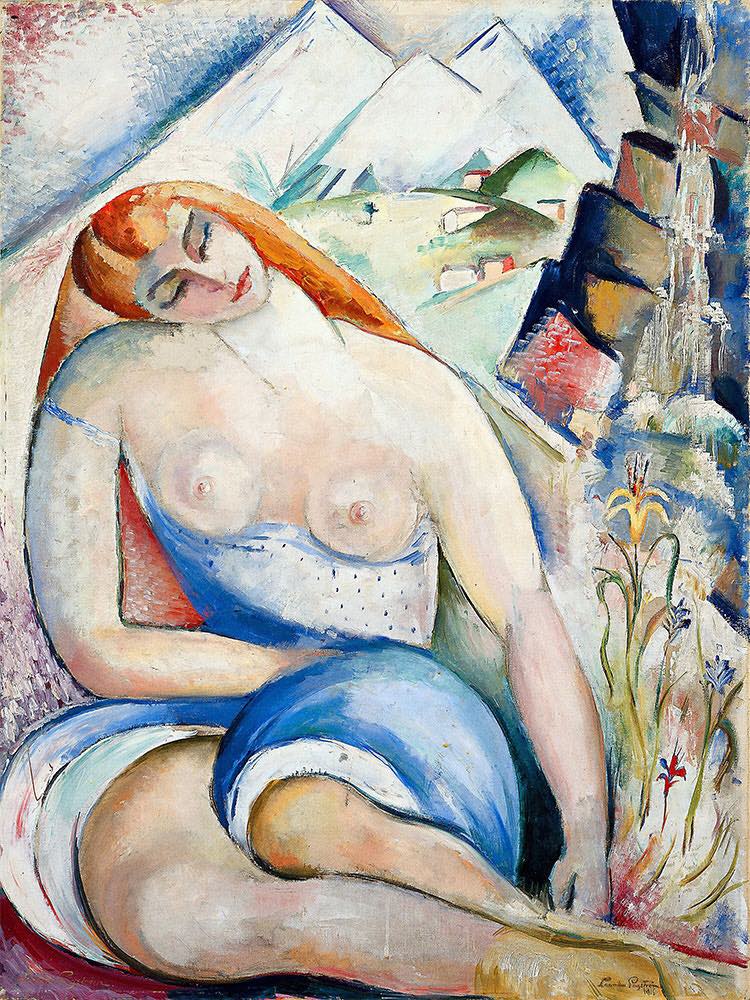