No connection to server
We use cookies to provide the best possible customer experience. If you continue you accept this use of cookies. Go here to read more.
OK
Modern Autumn Sale, Stockholm 575 Stockholm201203
202
445084 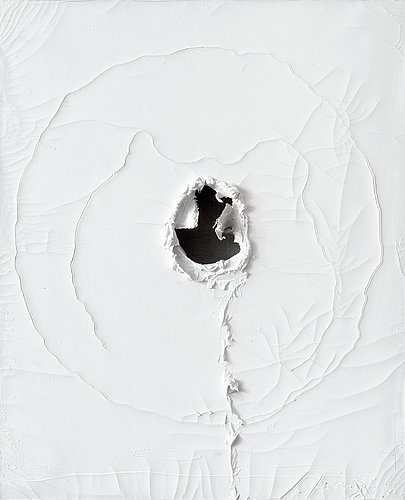 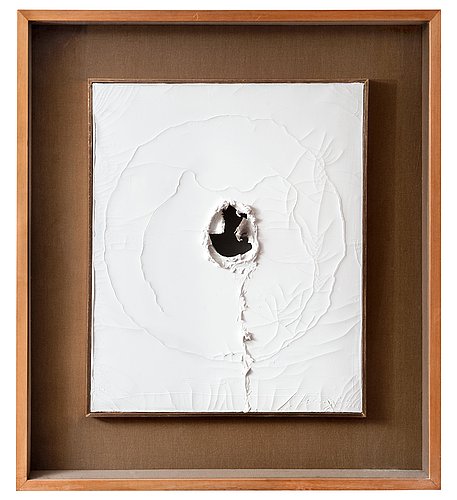 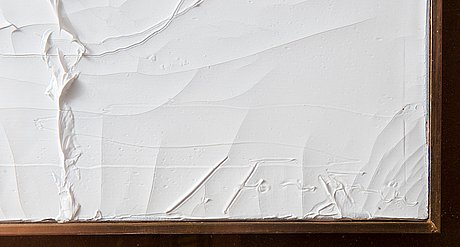 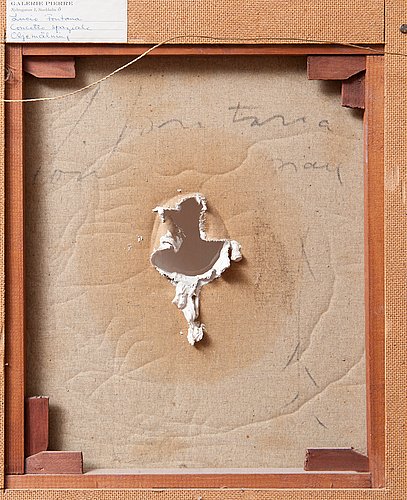 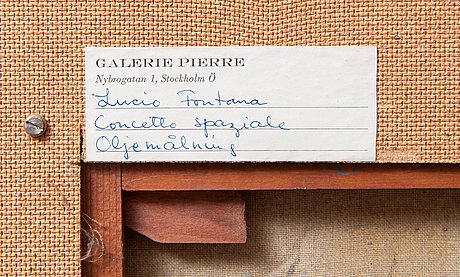 The year 1949 marked a turning point in Lucio Fontanas career, he created the "Buchi", his first series of paintings in which he punctured the canvas. He also made his first spatial environment, a combination of shapeless sculptures, flourescent paintings, and black lights to be viewed in dark rooms. In 1950 he published the "Terzo manifesto spaziale, proposta per un regolamento" and 1951 he wrote the "Manifesto tecnico dello Spazialismo", both inspired by his origins as a sculptor and in search of a third dimension. During the 1950s he explored working with various effects, such as slashing and perforating in both painting and sculpture and partecipated in the Italian Art Informel exhibitions. In 1952 he took part in a competition for the "Fifth Door of the Cathedral of Milan" and was joint winner with Minguzzi and exhibited his completed spatial works at the Naviglio Gallery in Milan. Now, Fontana was no longer limiting himself to making holes in canvases, he was also painting them. During this period he also gained international acclaim outside Italy. "The discovery of the cosmos is a new dimension, it is infinity, so I make a hole in this canvas, which was at the basis of all the arts and I have created an infinite dimension .. the idea is precisely that, it is a new dimension corresponding to the cosmos..The hole is, precisely, creating this void behind there. Einstein's discovery of the cosmos is the infinite dimension, without end. And so here we have, foreground, middleground and background..to go farther what do I have to do ?.I make holes, infinty passes through them, light passes through them, there is no need to paint" (Enrico Crispolti,"Spatialism and Informel. The Fifties, pp 144-150 in Lucio Fontana, Milan 1998, p 146)If any of my discoveries are important, the "hole" is, By "hole" I meant going outside the limitations of a picture frame and being free in one's conception of art. A formula like 1+1=2. I did not make holes in order to wreck the picture. On the contrary, I made holes in order to find something else..I can talk about it today, because they were basically my ideas. They never understood. They used to say that I ripped up canvases, destroyed things and wanted to break the rules. But that's not true. Look at Pollock..I have argued with a few Americans. Once an American in Venice said to me, -"You're the spatialist but you don't understand about spaces. Who are you anyway?" Later he got to know me but did not understand anything. He found out that I am Fontana and am a spatialist. -"But how can you understand space ? We've got Arizona. There's space for you.." -So I said to him, -"Look, if it comes to that, I come from South America and we have the Pampas which is twice the size of Arizona. I am not interested in the kind of space you are talking about. Mine is a different dimension. The "hole" is this dimension.(T Trini, "The last interview given by Fontana", pp 34-36, 1988,