No connection to server
We use cookies to provide the best possible customer experience. If you continue you accept this use of cookies. Go here to read more.
OK
Modern Sale 578 Stockholm370372
371
482827 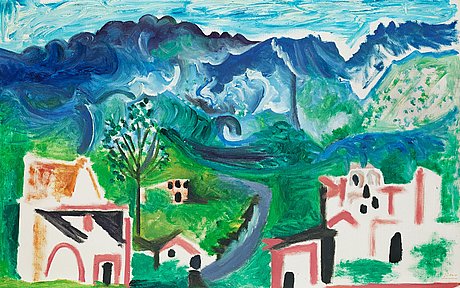 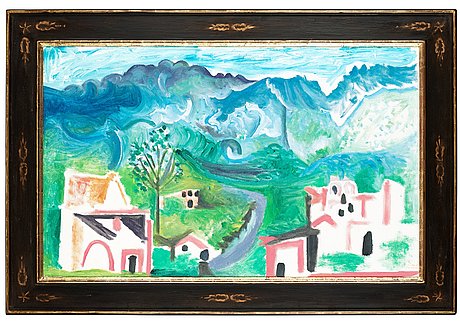 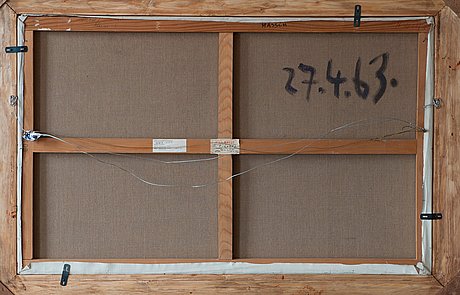 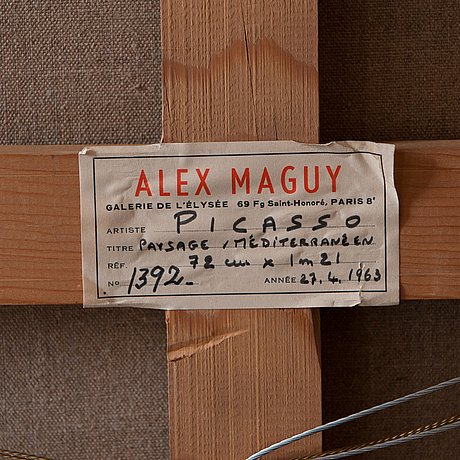 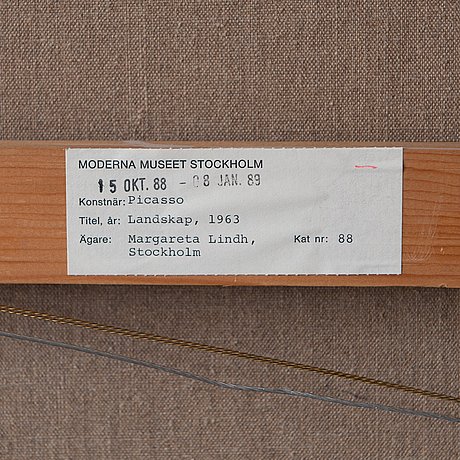 Alex Maguy - Galerie de L'Élysée, Paris (No. 1392).
The collection of Bo and Margareta Lindh, Stockholm, Sweden (acquired from the above in 1969).

In 1961 Picasso moved into his new villa, Notre-Dame-de Vie, in the little village of Mougins, 20 minutes by car from Cannes. The landscape is barren but cypress trees provide both fragrance and shade in the summer. The old hills create spaces in the landscape which give an illusion of total seclusion from the rest of French civilization in general and the shrill resort culture of Cannes in particular. Picasso had recently married the beautiful and 45 years younger Jacqueline Roque. He was enjoying his old age like a celebrity of Hollywood dimensions. His creativity was flourishing and he worked as if he were 20 years old and not 80.

Here is the landscape. Buildings are intimated, but it is the blue mountains that blend in with the lively and massive clouds that have captured Picasso’s interest in this very special painting - Mougins, his haven during the last 10 years of his incredibly eventful life. What has occupied the artist here? In addition to his monumental commissions, his production from this period is dominated by motifs with Jacqueline and mythological figures brought to life in burlesque and bacchanalian scenes. Imaginary figures mixed with an inner circle of family and friends. But just at the moment of this painting Picasso is utterly alone in his landscape, and his perspective is unusually “zoomed out”. There is a devilish playfulness in this seemingly innocent view – just compare it with Braque’s landscapes from the early 20th century (for instance, the Castle at La Roche Guyon in Moderna Museet’s collection). In the early work landscapes are presented in complicated prismatic patterns. Sixty years later, the relationship is the opposite. It is as if Picasso wants to tease his comrades and in extension the whole modernist movement by giving us a child’s landscape: the houses at the bottom, then the trees, the road and then the mountains and above it all, the sky. The circle is closed.

Picasso’s importance for the 20th century’s world view – which we are still living with – continues unabated. In the early part of the century, together with Georges Braque (and Kazimir Malevitj), he turned his back on representative reality and cast himself into an adventure which is still not over - anything is possible. Braque died in 1963 but Picasso continued with unimpaired vitality. Many have tried to put their finger on exactly what it is that makes his art so monumental. Power and immediacy? Over 50 years have passed since this landscape was painted but it is as if we are looking at it being created in front of our very eyes, at this very moment. And so it will also be in 500 years. There, in the brush stroke’s scalpel-like movement in the air lies Picasso’s glowing creative powers, among the mountains and the clouds created in that here and now.