No connection to server
We use cookies to provide the best possible customer experience. If you continue you accept this use of cookies. Go here to read more.
OK
Contemporary Art & Design 606 Stockholm184185A
185
1005494 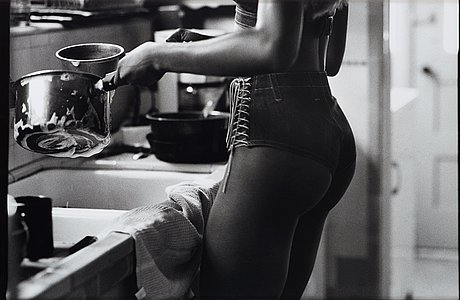 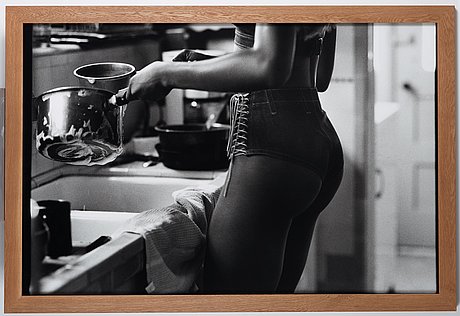 Acquired directly from the photographer by the current owner in the 90's.

Ellen von Unwerth is the fashion model who became a photographer. She takes humorous and sexy images of fashion models, artists and friends. Von Unwerth has said that she loved her ten years as a model,
the travelling, the interesting people she met and the beautiful clothes she wore, but in the end she had no choice but to find an outlet for her own creativity. She was given a simple camera as a present by a friend and took her first pictures on a trip to Kenya.
Her appealing mix of fashion, burlesque and eroticism features regularly in fashion magazines such as Vogue and Vanity Fair, but her images have also been used in campaigns for Victoria’s Secret, among others. There are some nods to Helmut Newton’s visual world, but von Unwerth’s images allow the personality of
the models to shine through, and there is a completely different chemistry between model and photographer. Ellen von Unwerth and Claudia Schiffer both had their breakthrough on the celebrated Guess campaign in 1989. Some of these images are currently on
display at Fotografiska, which is running a large retrospective exhibition of photographs from von Unwerth’s 30-year career until May 20, 2018. Ellen von Unwerth appears to love her job and has
tackled most assignments – from iconic advertising campaigns to music videos (Duran Duran, Salt-N-Pepa, Christina Aguilera, Beyoncé) and album covers for world-famous artists, such as Janet Jackson, Britney Spears, Christina Aguilera and Rihanna.
The photograph that are up for auction were taken for Azzedine Alaïa’s spring and summer collection in 1991, which was fronted by Naomi Campbell, among other models. Ellen von Unwerth’s images can be said to reflect her own story and personality in a number of ways – her career as a model, but also her celebrated charisma and curiosity. Her models radiate self-confidence and courage. Many of the images allude to the circus and cabaret, which is certainly a reflection of her own time as an assistant to a knife thrower at a circus in Munich, Germany. As a model she found it difficult to stand still, which is perhaps why there is almost always movement of some kind or an event unfolding in her photographs.