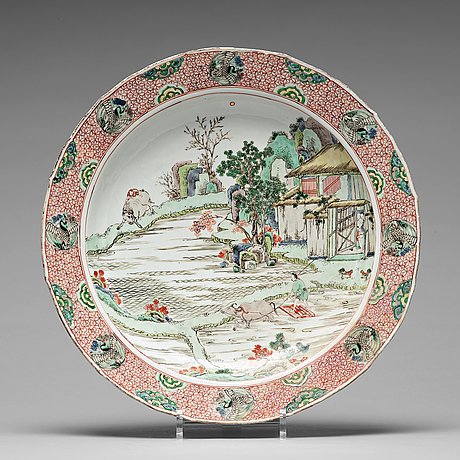 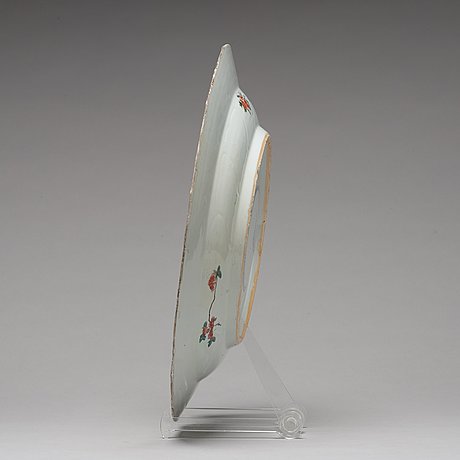 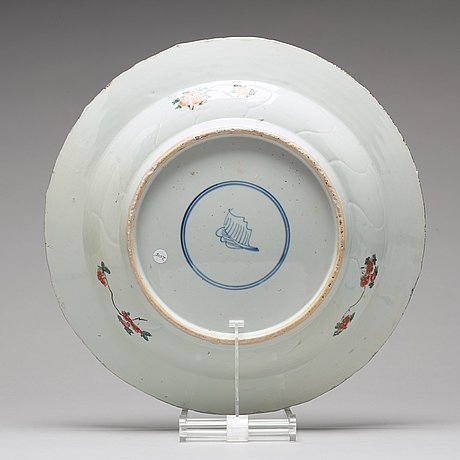 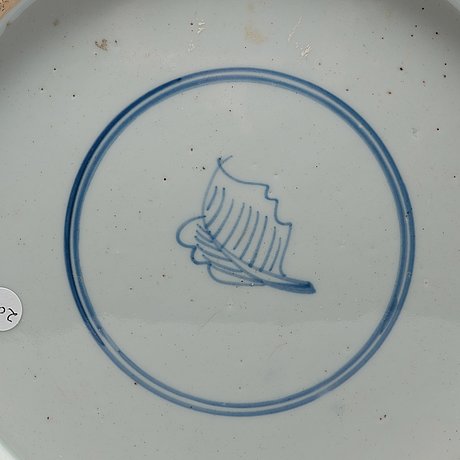 With a broad flat, scalloped rim, painted with a ground of wickerwork in red with eight roundels formed by a flying crane. In between the roundels are half – ruyi motifs and semicircular panels with flowers, positioned opposite each other. The crane itself is an auspicious symbol, representing longevity and wisdom. The reverse of the dish shows three camellia flower sprays in green and red and the base is marked with an artemisia leaf in under glaze blue within a double circle. The center with a scene with a man working his ox in a rice field, a woman and child peaking out of a building nearby.

The scene on this type of dish is normally drawn from the "Romance of the Three Kingdoms" or the "Western Chamber" - it is rare to find one like this that is drawn from the "Gengzhi tu". Diameter 37,5 cm.

This collection, which in the main focuses on the Interregnum and Kangxi periods has been both carefully and sensitively formed over the last twenty-five years. The collector, a member of the English Oriental Ceramic Society, has assembled the collection with an eye for provenance whilst purchasing from old European collections, well-established antique dealers and at auction.

Academically, the pieces have been well researched both in terms of their symbolism and narrative themes. In many instances the imagery on the pieces has been referenced to episodes in the romantic and historic novels of Chinese mythology, which were used extensively in the decoration of seventeenth century Chinese porcelain.

Compare also dish in the Collection of the British Museum, Gengzhi tu.

This dish belongs to a fairly large group of unusual dishes that have been given the name “Crane Medallion Dishes” by Christiaan J A Jorg. The group consists exclusively of dishes decorated in the famille verte palet – no variants in under glaze blue or Chinese Imari being known. Most of the dishes are decorated with scenes from literary sources based on woodblock prints but transformed into a circular composition to fit the centre of the dish. To date only 25 of these dishes have been traced to public and private collections in Europe – but not all have been published. Of this small group, only two of the dishes have the same decoration. A more detailed narrative of the “Crane Medallion Dishes” can be found in “Famille Verte: Chinese Porcelain in Green Enamels” by Christiaan J A Jorg, Pages 114 – 117.

The scene of the central medallion is a carefully composed image taken from the “Gengzhi tu”
Independent images of the daily tasks associated with tilling and weaving have a long history in China. However, the creation of a fully developed pictorial cycle only came into existence in the mid-12th century, during the latter part of the Southern Song dynasty, in the form of “ Illustrations of Tilling and Weaving” – “Genzhi tu”. This pictorial theme eventually initiated numerous variations and gradually became increasingly popular as the subject matter on diverse material forms.

The “Gengzhi tu” representations reached a high level of development during reign of the emperor Kangxi who expressed great interest in the agricultural activities of his empire with the establishment in 1681 of experimental ricefields on the periphery of Fengze yuan - ‘Garden of Abundant Marshes”.