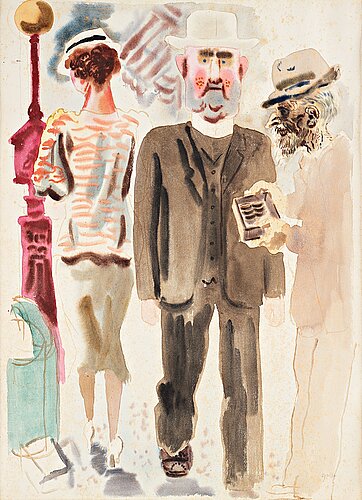 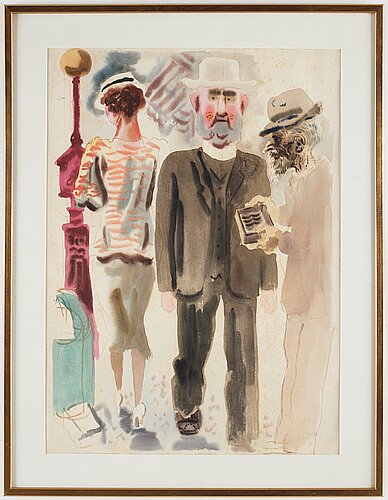 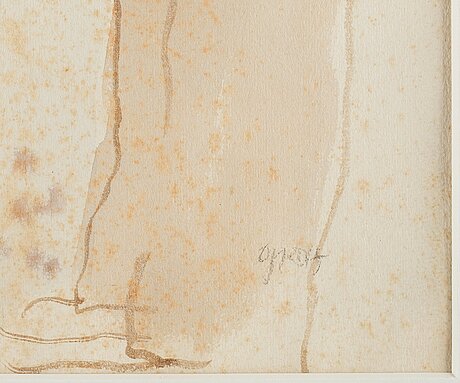 "Grosz came first to the United States in June 1932, following an invitation by the Art Students League of New York to teach a summer course. He was overwhelmed to be finally in the country he dreamt about since his childhood and live in a city that reminded him in a way of the metropolis Berlin and yet was so new and different to him.

When Grosz settled in the USA in 1933 for good, he roamed, like he had done in Berlin, the city by day and night, filling one sketchbook after the other with whatever his observing eye discovered as noteworthy. In the evenings, back at his country home in Bayside on Long Island, he executed in large drawings and watercolors with scenes detected during the day like this very one.

It is a typical street scene in New York that can be found in many parts of the city. There walks a neatly dressed woman away from the onlooker, while an elderly, somehow poor looking guy in a brown suit is passing her. A tattered looking guy on the right is offering some sweets, probably in the hope to receive a small change in return. A street lamp and parts of a blind is the only architecture that can be detected.

Grosz started the work with watercolor, working wet into wet, outlining the figures and the street lamp with a few thin lines of black and sepia ink. The artist depicts in this work the section of a lively street scene like in a flash. However, what seems accidental has been composed by the artist in a careful manner, showing one face of the many faces a city like New York can have”.