No connection to server
We use cookies to provide the best possible customer experience. If you continue you accept this use of cookies. Go here to read more.
OK
Category /
Art
/
PhotographsKonstspecialisternas tips
966862 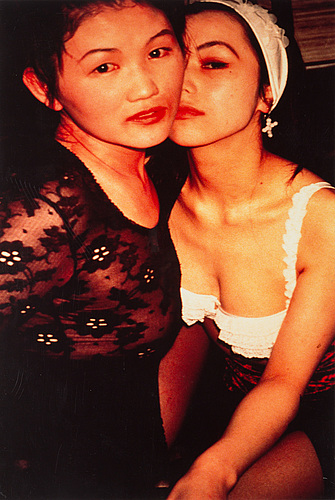 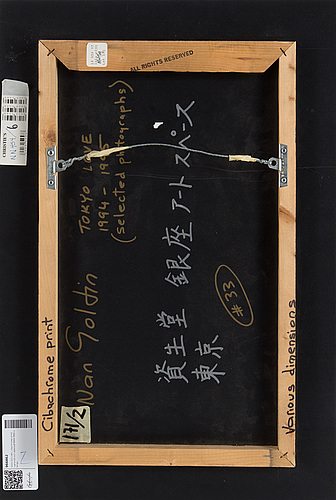 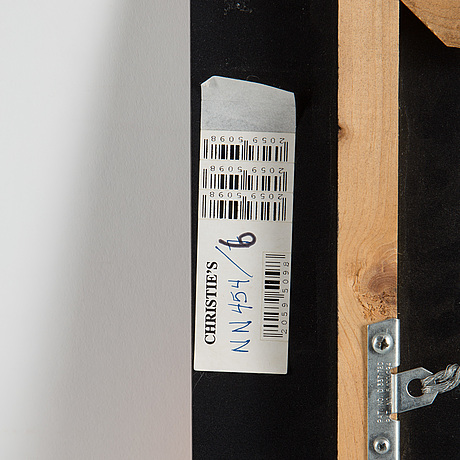 Scratches and some marks.

”Comprising almost 700 snapshot-like portraits sequenced against an evocative music soundtrack, Nan Goldin’s The Ballad of Sexual Dependency is a deeply personal narrative, formed out of the artist’s own experiences around Boston, New York, Berlin, and elsewhere in the late 1970s, 1980s, and beyond. Titled after a song in Bertolt Brecht and Kurt Weill’s The Threepenny Opera, Goldin’s Ballad is itself a kind of downtown opera; its protagonists—including the artist herself—are captured in intimate moments of love and loss.
They experience ecstasy and pain through sex and drug use; they revel at dance clubs and bond with their children at home; and they suffer from domestic violence and the ravages of AIDS. “The Ballad of Sexual Dependency is the diary I let people read,” Goldin wrote. “The diary is my form of control over my life. It allows me to obsessively record every detail. It enables me to remember.”
Ur utställningstext, MOMA New York 2017

"In 1994 Nan Goldin and Nobuyoshi Araki decided to collaborate on a project about adolescents in Tokyo. They set out to capture the joys, thrills, and anxieties of youth. The two photographers, each of them in their very own way obsessed by love and eroticism, complemented one another perfectly. Together, they forged a panoramic vision of love and sexuality in all its varieties. Nobuyoshi Araki took pictures of young girls in his studio capturing both their budding awareness of the female body and its seductiveness and, on the other hand, their insecurity and anxiety. His portraits precisely pinpoint the frightening and exhilarating transition from girl to woman. Nan Goldin explored Tokyo's queer underground-gay boys, transvestites, fetishists, and all those who defy society's preordained definitions of sexuality. She celebrates their courage and beauty, their fight for their right to love. Araki and Goldin rejoice in the exalted erotic perplexities of adolescence, its pleasures, hopes, and despair.”

”There are few artistic partnerships as brilliant as the one which developed between American photographer of the personal and the powerful, Nan Goldin, and her Japanese peer Nobuyoshi Araki, when the former spent time in Asia in the 1990s. Together, the duo merged their unique and idiosyncratic perspectives on intimacy, sexuality and beauty, collaborating most comprehensively on the book Tokyo Love: Spring 1994 – and it is from this fascinating insight into the Japanese underground that our most-Loved image of the week is taken, as selected by AnOthermag.com fashion features editor Olivia Singer.

The book itself has become an elusive jewel of visual culture – what rare copies of it there are in circulation passed from one pair of hands to another like a precious relic of a time gone by. Its demand is unsurprising, placing as it does the work of Goldin side by side with the prolific erotic art of Araki, with one enhancing the pull of the other like an unexpected pairing of fragrances. The snapshots which resulted are at once warmly sensual and gently probing, examining the emerging identity of Japanese youth culture even as they preserve it for posterity, and for our curious voyeurism. Here, Singer explains her fascination with this poignant image, and shares an insight both into her love of the duo and her Christmas shopping.”
Ur recension av journalisten Maisie Skidmore, anothermag.com, Nov 27, 2015

”If there is one artist in the world today whose works stop you dead in your tracks it is this photographer of raw life. You may be entranced or enraged by Goldin's colour-saturated, lyrical and sleazy slideshows, but they are undeniably compelling. This show brings together her photographs of children, so if you are easily offended it might make your day.”
Ur The Guardian, Jonathan Jones

”Nan Goldin is one of the best photographers of our time. She is real, true and awesome. Her photographs are raw and unsensored. She doesn't just go out and photograph random people on the streets, which would not necessarily be a bad thing anyway... but she establishes real relationships with the people she photographs before taking their picture. Therefore, her images really show something true about the person. Her colors and compositions may seem simple or whimsical to a stupid person, but anyone with half a brain will see that they are actually carefully thought out. She is a master of color use in order to convey a certain mood. Nan Goldin's photographs are raw, real, and powerful.”