We use cookies to provide the best possible customer experience. If you continue you accept this use of cookies. Go here to read more.
OK
Category /
Art
/
ContemporaryContemporary Art Online
1286081
Matt Greene
(United States, Born 1971) 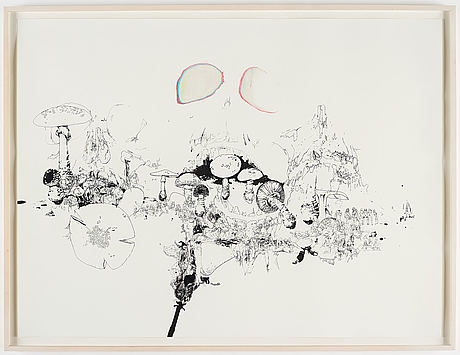 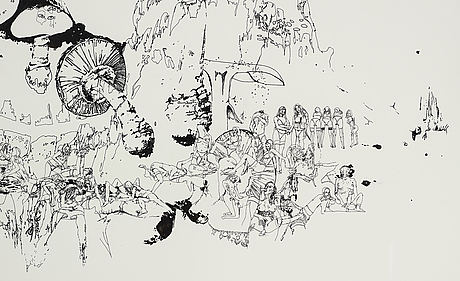 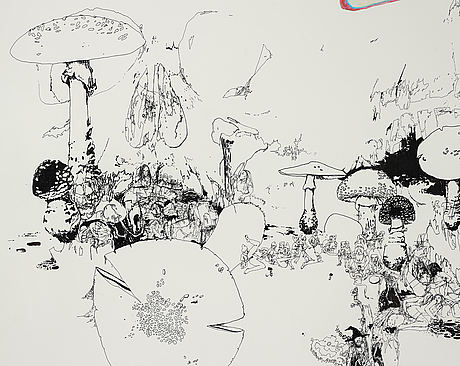 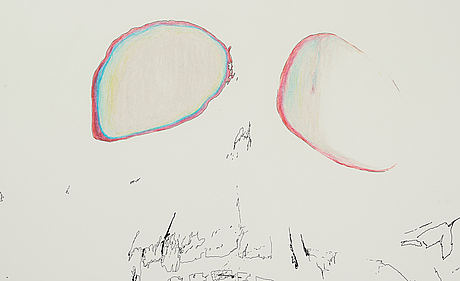 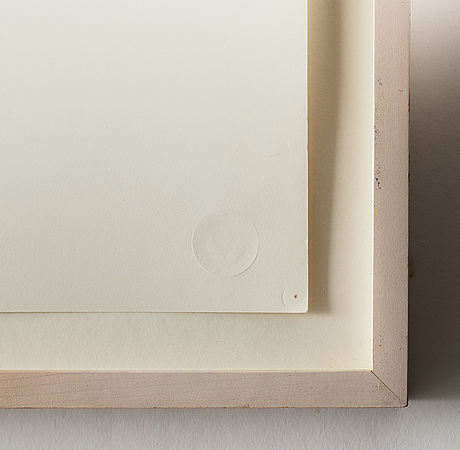 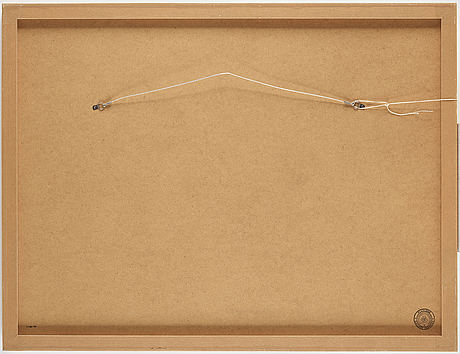 Matt Greene, executed in 2003, ink and crayon on paper.

Needleholes in each corner. Not examined out of frame.

MATT GREENE (B. 1972 in Atlanta, Georgia) lives and works in New York City.

“IF A YOUNG ARTIST HASN'T ATTENDED ONE OF THE big-name grad schools, his or her work needs either a miracle or a very catchy hook to make any impact on the art world. For LA artist Matthew Greene, that hook is so-called new gothic art, the genre of transgressive, violence-soaked, heavy metal–flavored work currently piquing the interest of American gallerists and critics for what has been termed its “post-9/11, post-Columbine” aesthetic. But while Greene’s flair for romanticizing the horrific has made his work and new gothic a cozy fit thus far, there’s too much distance between his intricate, subtext-laden, inferno-like compositions and the scenery-chewing artworks that have defined (and stigmatized) this genre to leave his efforts stranded under that gross rubric for long.

Trained as a sculptor at the Atlanta College of Art, Greene switched to drawing and painting when he realized that effectively synthesizing his disparate fascinations with radical politics, plant biology, and the particular head rush caused by disturbing and/or pornographic imagery would require more power to suspend disbelief than sculpture, with its physical literality, could provide. After moving to Los Angeles in the late ’90s, Greene discovered that his content-weighted objects were at odds with the prevailing interest in overt abstraction; he spent the next few years in self-imposed solitude, reinventing his process until the art world’s newfound taste for the quasi-teenage and nihilistic brought a wave of curators to his door. Greene’s work was first showcased last summer in the director’s office at the Los Angeles gallery Sandroni Rey, whereupon its quality and timeliness—combined with the novelty of a fresh arrival on the art scene sans the usual pedigree—made him one of the city’s most talked-about new artists.

Greene’s recent work takes its stylistic cues from the apocalyptic, pre-CGI-enhanced realism that characterizes horror films and rock-album illustration of the early ’70s. His busy, carefully executed pictures portray a world in which nature has run amok, corrupting normative social behavior and effectively reducing humans to sex-crazed, warring playmates. Each drawing and painting organizes one chaotic scene into a distinct, eye-popping pattern, at once impressively precise, unwieldy in its design, and ruptured by the visceral effect of its sensational subject matter. These crude, strangely seductive, trippy graphics are themselves embodiments of the primitivist nightmare Greene depicts—their elaborate amateurism a kind of aesthetic monster forcibly revising the rules for what constitutes a sophisticated contemporary art practice.

In a typical Greene painting or drawing, a crowd of female or transgendered figures is fused into a puzzle-like, orgiastic clump, enmeshed within the structure of a foreboding forest landscape. Often the crowd is flanked by a monumentally rendered rock guitarist whose feral sonic thrashing fuels the figures’ hedonistic and/or violent interactions. For Greene, such decadent, paranormal visions constitute arguments against Western society’s abandonment of the magical beliefs and ecologically derived philosophies of so-called primitive cultures. His art hallucinates miniworlds untouched by capitalism, patriarchy, and class issues—contemporary variations on the seductive dreamscapes that preoccupied the imaginations of premodern artists. Greene’s are romantic reveries cramped and damaged by a context from which pure romanticism has been expunged. Their “objectionable” content, psychedelic simulacra, and rebellious rock-music timbre might be misconstrued as bratty, in-your-face theatrics, but to Greene they are illustrations of the few remaining ways in which passionate truth-seeking plays out in an era devoid of character.

Matthew Greene’s meticulous, raucous work can be seen this month in group shows at Anton Kern Gallery in NewYork and Ingalls & Associates in Miami. In February he joins fellow neo-goth Banks Violette in a two-artist show at the Los Angeles gallery Peres Projects, where he also solos next fall.” ARTFORUM, 2004

Send a message
What will the transport cost?