No connection to server
We use cookies to provide the best possible customer experience. If you continue you accept this use of cookies. Go here to read more.
OK
International Spring Sale, Helsinki F159 Helsinki235237
236
214693 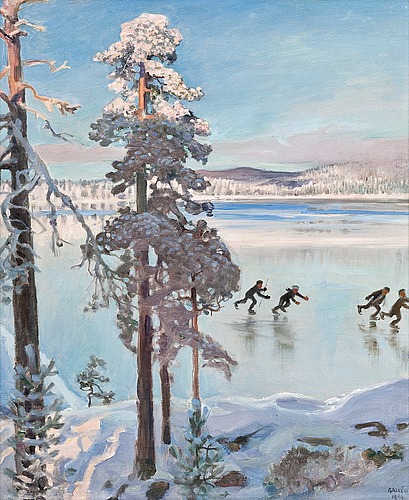 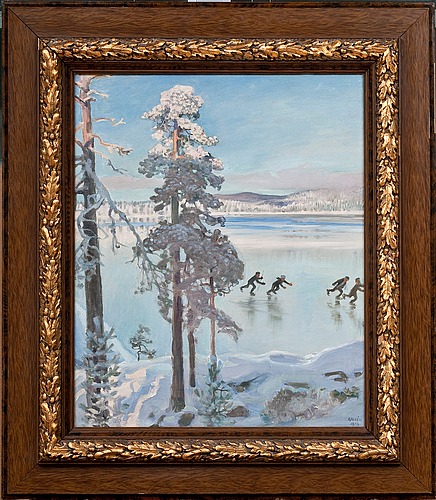 "SKATERS NEAR THE SHORE OF KALELA".

SKATERS NEAR THE SHORE OF KALELA

The previous autumn work on Axel Galléns’s newly built studio in the wilderness near Ruovesi had been completed. In 1895, just before Christmas, Mary and Axel had moved into their new home, which they had decided to call Kalela. At that time parts of the spacious log cabin were still under construction. During the time that he had spent in Berlin, Axel Gallén had become interested in graphic art and this interest grew still stronger with the arrival in Ruovesi of a ...which had been ordered in Manchester. The first big Kalevala work, The defense of the Sampo was already on its way to an exhibition in Helsinki. The home was filled with the sounds of a baby crying. After losing their daughter, Impi Marjatta , Mary and Axel had had another child. The breathtakingly beautiful winter made the artist’s blood boil despite the severe cold. It was a strange November, the first snow had fallen before the lake had frozen, the pine trees were covered in snow that had frozen on the branches. Soon calm days followed and the surface of Lake Isoselkä was covered in glassy ice.

On the 12 of November Mary Gallén wrote to her mother in Alberga:” Axel is painting the frozen lake from every possible angle and direction in order to create works to sell”. Attracted by the smooth surface of the ice, young boys from the neighbourhood attached runners that the local blacksmith had made, to their boots and set off across the alarmingly thin ice towards Kalela. The artist only had to walk a few steps from the porch on the west side of his home, down to the northern lakeshore and place his easel in the snow. Still, work was a constant struggle against paint that froze and fingers that became numb. At regular intervals, both hands and paint had to thaw by the fire in the artist’s studio. The plein-air painter only had a limited amount of time at his disposal, soon the sun, which was low on the sky, would set behind the ridge of Kautu. Only the top of the pine tree still glowed golden in the fading light. The artist persuaded the boys to make one last turn around a small cape which was close by. The boys felt that they had been entrusted with an important mission, as they were now participating in the creation of a work of art. The newly frozen ice cracked chillingly as the young daredevils flew of over its surface. It was essential to keep up speed as the skaters could feel the black ice moving beneath their skates. One of the boys had equipped himself with a sturdy stick in case something went wrong. In the background Pääskyniemi promontory and the sixty meter high Pääskyvuori hill can be seen. Later Pääskyniemi hill became known as Donner’s hill. A couple of years later, Otto Donner jr and his artist friends were to go looking for a suitable place to build a house near the top of the hill. Axel drew up plans for the house and shortly afterwards the friends started the construction work in earnest. The plan was to build a stone castle at the top of the hill, but the mistress of the future house was neither convinced about the location nor about the gentlemen’s highflying plans that she found to be singularly lacking in practicality. The French-born Valentine had no intention of spending her life in the wilds of Ruovesi, where wolves and bear abounded. Thus the men´s dreams of great astronomic discoveries and wilderness romance ended. Still today, traces of the grandiose construction project can be seen on the slopes of Pääskyniemi. Extensive terracing and majestic stone blocks bear witness to this ambitious dream.
During these few, cold and clear days, more than a hundred years ago, Axel Gallén created some of the best nature..in his entire production. Amongst other works, he now painted the well-known work Freezing lake shore. Here we can see the same landscape, with the focus on the frozen lake, painted from almost the same spot, but looking towards Pöytäniemi in the north-east.