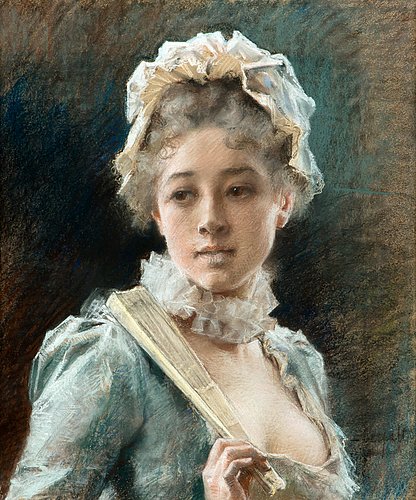 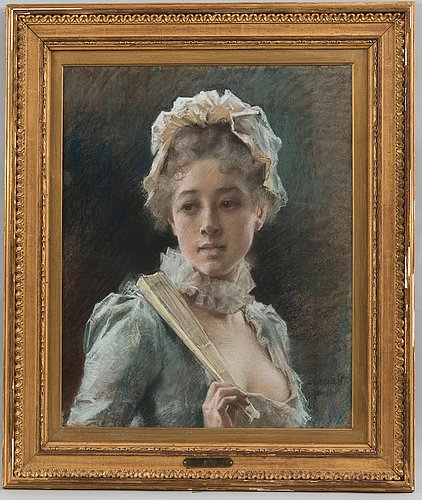 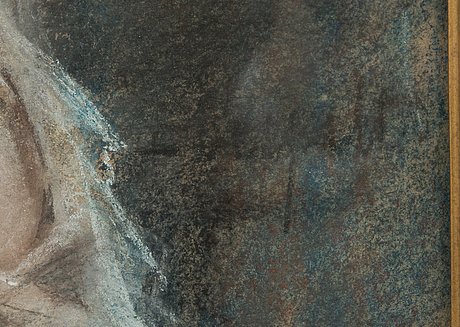 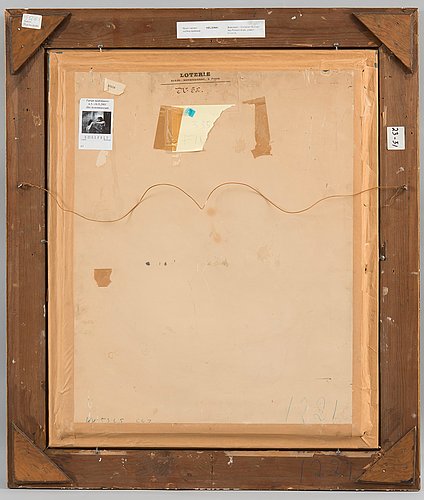 "A YOUNG WOMAN WITH A FAN".

A Young Woman with a Fan.

The tradition of Finnish pastel painting was introduced by Albert Edelfelt in 1882. According to Bertel Hintze Edelfelt was inspired by the 18th century masters that were on display at the Louvre. Hintze mentions Maurice Quentin de La Tours (1704-1788) and Jean-Baptiste Perronneaus (1715-1783) as role-models for Edelfelt, as well as Gustaf Lundberg (1695-1786) and Jean-Étienne Liotard (1702-1789).
An interest for historic motives of the 18th century, like women in contemporary clothing, grew during the epoch of historicism. Especially neo-rococo that had become a furnishing trend, created a need for appropriate wall-hangings among art collectors that had a liking for 18th century style. Newly-made pastels hung side-by-side with old paintings in the drawing rooms. The frames were designed and gilt accordingly to fit the interiors. Edelfelt made Gustavian motifs alongside neo-rococo motifs, which seems rather close to home considering his family-background. His father was an immigrant from a Swedish noble family, and his mother spent her summers at Haikko estate surrounded by Gustavian furniture saved (= bought at a forced auction) from her family-estate Kiiala and the nostalgic memories they portrayed. In addition to rococo and Gustavian style paintings Edelfelt also made paintings in the Directoire style.

The colouring of the pastel A Young Woman with a Fan (1884) is executed in unobtrusive Gustavian blu-gray and rosy shades against a black background. The young lady is dressed in a contemporary rococo dress with a lace choker and lace bonnet on the powdered hairdo. These types of bonnets are typical for pictures of 18th century chambermaids. In Paris these dresses could be rented or borrowed from friends or from theatre ensembles.
Gunnar Berndtson, Edelfelt's studio-neighbour and colleague, dressed his models in such dresses while painting 18th century milieus.

In the late 19th century the use of the fan was still quite common, especially at concerts and the opera. The non-verbal message was naturally known as well, like in the popular operetta Carmen by Georges Bizet; a closed fan means "No", the message was to be emphasised by the gaze.
Edelfelts accurate pencil drawing and sense for colour-harmonies are the foundations of his pastel-technique. Hintze did't save his praise when he described this. "Edelfelt as a figure-painter did certainly think in terms of lines, but he surely experienced his impressions through light and colour, and therefore he found the pastel-chalk to be the most immediate means of expression, it was the line and the colour simultaneously and it corresponded with the drawers sense of form and the painters intimate sense of colour."