No connection to server
We use cookies to provide the best possible customer experience. If you continue you accept this use of cookies. Go here to read more.
OK
Category /
Art
/
Modern Finnish ArtHelsinki Spring Sale
1314749 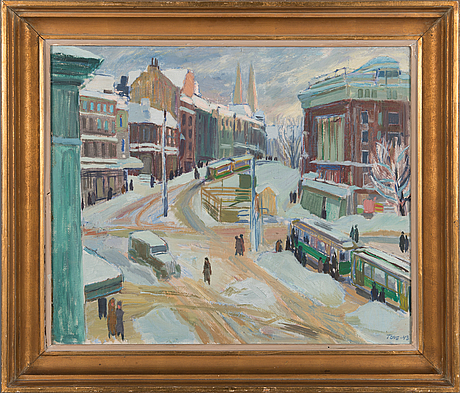 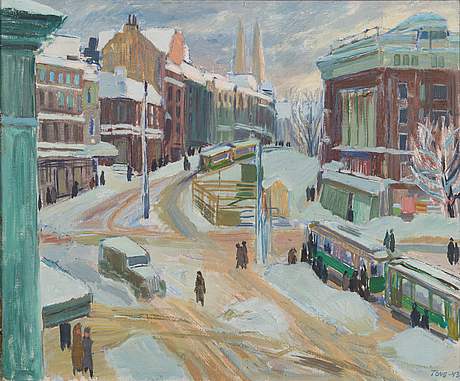 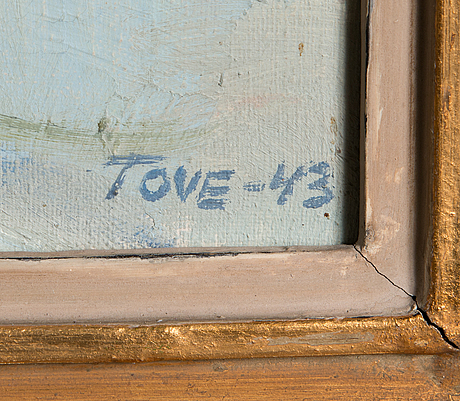 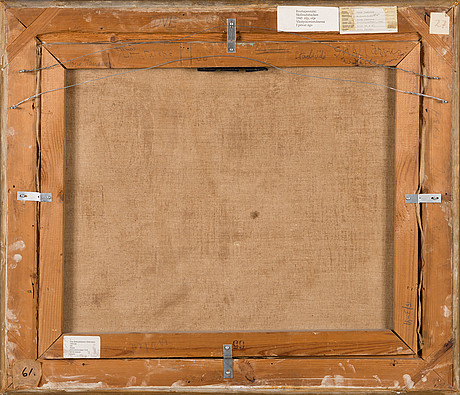 Wartime was a productive period for Tove Jansson as an artist. Her breakthrough as a visual artist is considered to have taken place during these very years. The war period was still a consuming time for Jansson: members of her family were enrolled for military service, there was a constant shortage for materials, and there was an ever-present atmosphere of danger shadowing everyday life. Art offered a balancing effect for the surrounding reality and political tensions, and besides the few exceptions, there are hardly any hints of the ongoing war in Janssons’s production. According to Erik Kruskopf, Jansson pictured the heavy years in an idyllic, even serene way.

In the painting Erottaja Hill from 1943, the presence of war can be seen only subtly, in a sketch-like manner, in the way she placed the entrance to an underground bomb shelter – for the design of which Alvar Aalto was awarded the first prize in 1941 – in the centre of the painting. Due to the Continuation War, Aalto’s proposition could not be executed, however, and the new entrance wasn’t completed until 1951.

In the bustling Erottaja Hill there is hardly any place for wartime anxieties – people can be seen going about with their everyday chores. A characteristic element for Helsinki as a motif, a tram car, has stopped at the platform to pick up passengers going to Southern Helsinki. A string of walking characters at the pavement along Erottajankatu are protecting themselves against the bitter cold, heading firmly towards the district of Ullanlinna.

While Tove Jansson’s city motifs are usually placed in the outskirts of the city, the Erottaja Hill is one of the most central and recognised locations of Helsinki. The area around Erottaja at the core of Helsinki is significant because of its culturo-historical and architectural qualities and due to its location. Erottaja is a crossing point of two different grid plans and the streets Mannerheimintie, Bulevardi and Eteläesplanadi, and this is the very point where official distances to the other Finnish cities are measured from. The two towers of St. John’s Church ascending in the horizon are an important landmark in the silhouette of the capital, and the renowned Stockmann department store is even today located within the angle of sight of the painting.

One of the most central historical buildings in Erottaja is Erottajankatu 19, designed by Theodor Höijer and completed in 1893. It can be seen on the left in Tove Jansson’s painting. The address has a specific significance in the provenience of this painting. The Oy Hans Palsbo Ab agency was located in this palace-like building during the 1950s and 60s, and the owner Hans Palsbo’s wife, Utti Palsbo, acquired the Erottaja Hill for the family in the 1960s. Since then, the painting has been a part of the Palsbo family collection. It has been displayed in a number of exhibitions in art museums, most recently in Ateneum Art Museum in 2014.