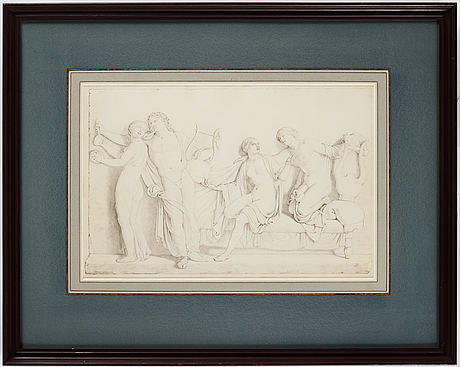 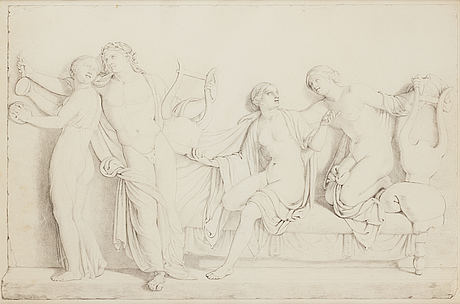 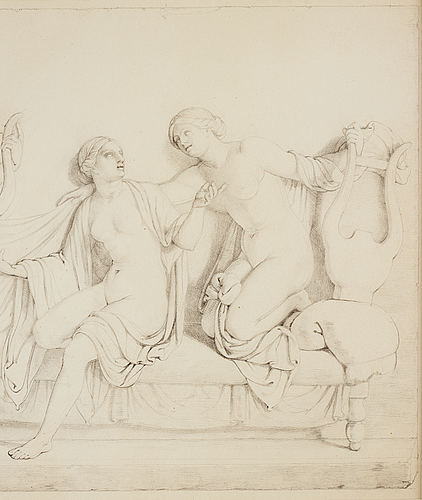 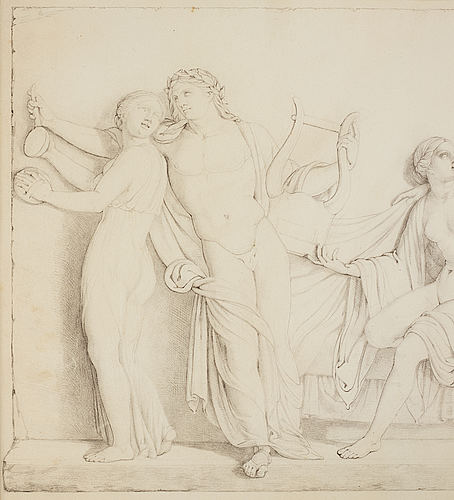 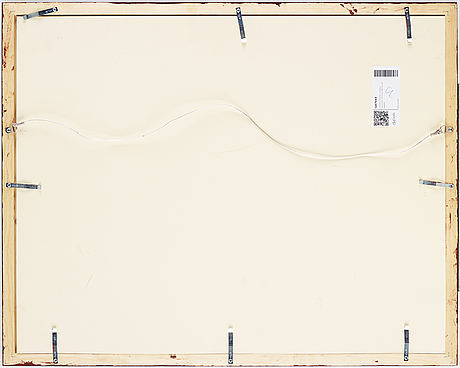 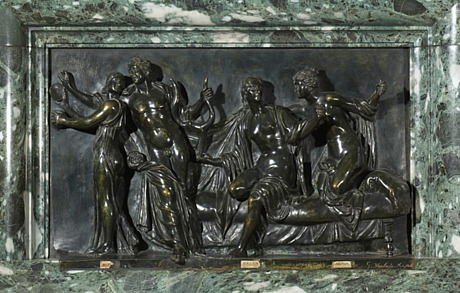 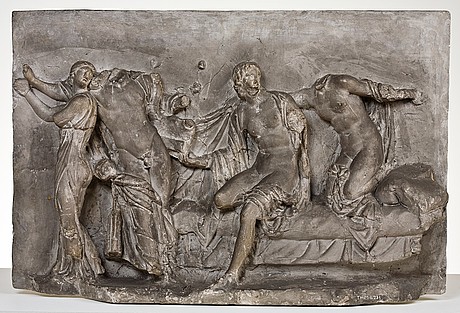 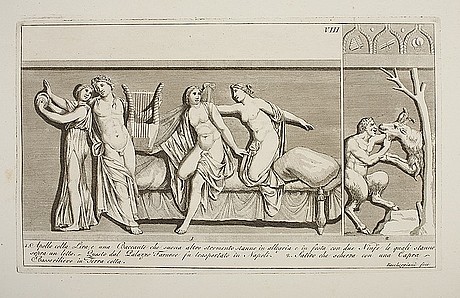 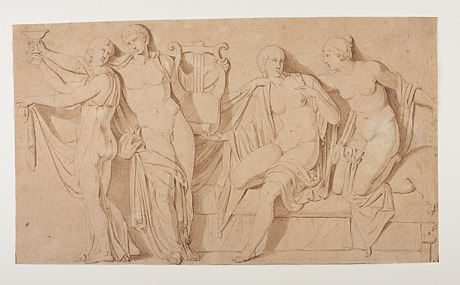 A study after a Roman marble relief after a Greek original in the National Archaeological Museum, Naples, previously in the Farnese Collection. The relief was restored by Carlo Albacini in Rome 1787-1788. It was first made public through an engraving by Pietro Ruga in Lorenzo Rocceggiani’s "Raccolta di cento tavole rappresentanti i costumi religiosi civili, e militari degli antichi Egiziani, Etruschi, Greci e Romani tratti dagli antichi monumenti ...: per uso de'Professori delle Belle Arti Disegnate", Rome 1804 (fig. 1). Another intriguing testimony to the ancient marble's appeal is a drawing after it attributed to the celebrated neoclassical sculptor Bertel Thorvaldsen (1770–1844), now in the Thorvaldsen Museum in Copenhagen (inv. C832) (fig. 2). In 1797, the artist had spent a month in Naples precisely to study the city's antiquities, before going on to Rome to complete his training. Thorvaldsen owned a cast after the relief in its unrestored state (Thorvaldsen Museum, Inv. No. L 281) (J. Zahle,"Thorvaldsen Collector of Plaster Cast from Antiquity and the Early Modern Period", 2020, illustrated) (fig. 3).

The drawing shows close resemblance to drawings after the antique by Constantin Hansen (Rome 1804-1880 Copenhagen). During his eight year long stay in Italy (1835-1843), Hansen visited Naples on several occasions. During the summer of 1839 he was there together with Christian Købke (Copenhagen 1810-1848 Copenhagen). It is known that Købke made copies after the antique in the Museo Borbonico (now the National Archaeological Museum), none if which today are known. Købke returned to Copenhagen in 1840 with a large collection of sketches for later use and inspiration. Eleven copies after the antique were exhibited in Copenhagen during Købkes’s lifetime (E. Hannover, "Maleren Christen Købke", Copenhagen, 1893, p. 108: “Drawings of famous antique statues”). Between 1844-45 Købke participated in the decoration of the Thorvaldsen Museum in Copenhagen.

The antique original marble relief was first recorded in the inventory of Cardinal Odoardo Farnese's Roman palaces around 1642 as 'un basso rilievo con quattro figure due in un letto, et Apollo senza testa, et un'altra femina fuori di letto'. An intriguing object, the Farnese marble appears in a drawing by Pietro Testa (1611-1650) for Cassiano dal Pozzo's famous Museo Cartaceo, acquired in 1762 by King George III (though not in its entirety) for his library at Buckingham House. Consisting of more than seven thousand watercolours, drawings and prints, the Museo documents subjects as wide-ranging as ancient art, archaeology, botany, geology, ornithology and zoology. As scholars have pointed out, dal Pozzo's choice of antiquities for the Museo was driven by an interest in the original and unexplored, criteria to which the Neapolitan relief evidently responded, since it was singled out in the immensely rich Farnese collection, together with only twenty-five other items.

At the end of the 18th century - when Ferdinand IV of Bourbon inherited the Farnese treasures and ordered their transferral to the seat of his Kingdom - the marble plaque must have arrived in Naples, where it would have been housed in the newly opened Real Museo Borbonico. Here, alongside other marvels such as artefacts excavated in Pompeii, the relief would have been admired by local and foreign visitors and artists alike, as testified by the existence of several 19th Century copies in bronze after the original marble for a 'Grand Tour’ audience; one, by G. Varlede, 57.9 x 83.2 cm., is at Wallington, Northumberland (Accredited Museum, National Trust Collection) (fig. 4). The women are labelled Myrto, Kalyke, Hedyle. Myrto was a wife of Socrates, Kalyke (Calyce) could be one of the Nysiad nymphs who nursed Dionysus and Hedyle was a poetess, who lived in Athens, during the third century BC and wrote a poem entitled Scylla. 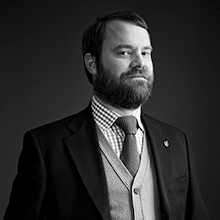