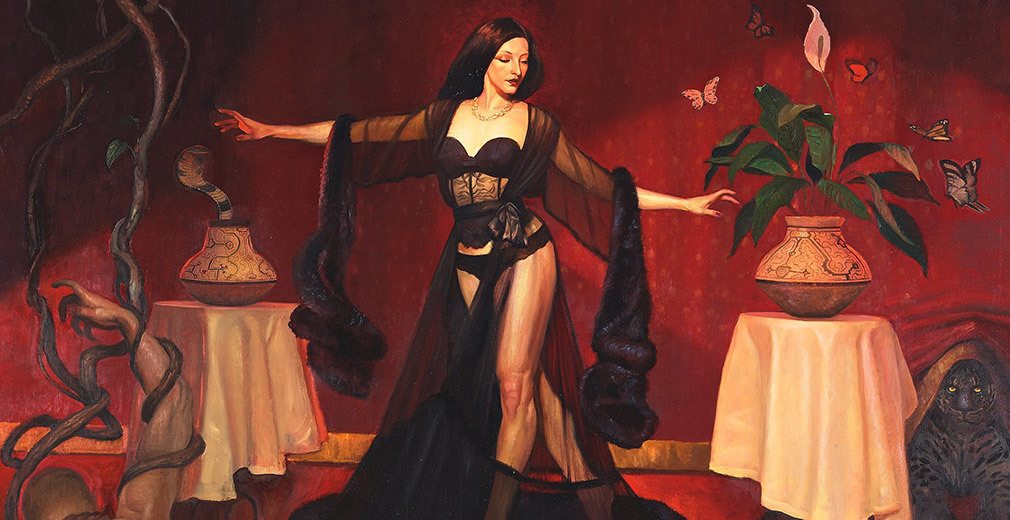 “This painting is primarily inspired by the Slipper Room, which I first encountered in New York in 2008. It was a one-story shoebox-looking building with a burlesque live show on the ground floor, and toilets in the basement with a leaking ceiling. Here I saw great creative striptease performances by performers like Miss Dirty Martini, Rose Wood, Rudi Maccaggi and many more. Having been in love with the French painters Toulouse-Lautrec and Edgar Degas’ depictions of Parisian nightlife, I immediately saw a likeness in the atmosphere of the contemporary New York burlesque scene. I understood that this was a gem worth depicting in my paintings, but before I managed to capture it, the Slipper Room closed for renovations. It would take them several years to reopen as the old building was torn down. In its place a three-story building appeared, and to everyone’s surprise so did the Slipper Room. It had managed to negotiate its way back into existence in the ever-changing city of New York. The new Slipper Room, with its original crew of talent and performers giving it all on a new gorgeous theatrical stage, became the inspiration for many of my paintings. Most of the figures in the painting ‘Hypnotica Terrible’ are performance artists in New York, the main character is Cassandra Rosebeetle, who performs regularly at the Slipper Room.

The second inspiration for this painting comes from another culture. In 2010–2012 I made several trips into the jungles of Northern Peru meeting the Shipibo tribes in the Amazon rain forest region. I became particularly interested in this culture’s ability to connect with the dream world and the subconscious mind. The visions that came to me whilst spending time with the elder shamans of a village up the Ucalali River collided with my inherited cultural values and experiences in an astonishing way, merging the jungle with the memories of my urban life in New York. The result became a series of mind-bending images that forced their way onto my canvases, displaying a dance of love, romance, horror, decay and death in a new fashion.”

‘Hypnotica Terrible’ depicts a journey where the primeval forces of life and death in nature invade the realm of mankind’s made-up, staged, escapist world of the theatre and urban pleasures, confronting all the nightclub guests depicted in the painting with the reminder of everything’s impermanence and decay. 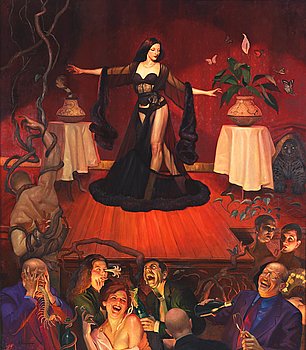