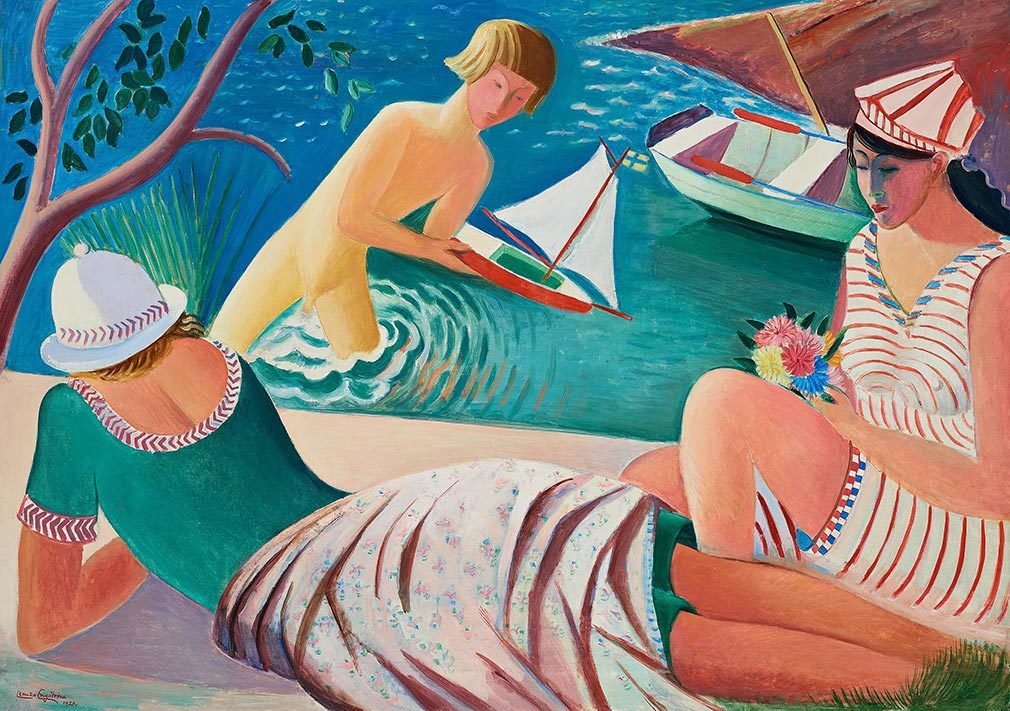 The Expressionist Exhibition at Liljevalchs konsthall, Stockholm in 1918, was an amazing manifestation for Modernism and Expressionism and for the Swedish artists Leander Engström, Isaac Grünewald and Sigrid Hjertén. The Grünewald and Engström families were close friends and had exhibited and spent time together since their early days at the Matisse Academy in Paris.

The exhibition halls at Liljevalchs were filled with paintings, glowing in daring colours in unexpected combinations. The three young artists, viewed as radicals and Bolsheviks by the art press, aspired to break away from naturalistic painting ideals and find their own form of expression. At the same time, they were fighting for the right to express themselves on their own terms. In his text in the Liljevalchs catalogue from 2008, Anders Wahlgren explains how this period was characterized by the Russian Revolution of 1917 and how breaking away from academic standards was interpreted as revolutionary in artistic circles. Criticism of the three expressionists was soon to follow, but despite a storm of disapproval from the critics, the intrigued public flocked to the exhibition and the breakthrough of Modernism in Sweden was a fact. Engström, Grünewald and Hjertén continued to paint in their personal and radical style, reaching an ever-greater audience.

“Badstranden” (The Beach), was painted in 1920, a few years after the exhibition at Liljevalchs konsthall and the same year that Engström travelled to Italy with art critic Ragnar Hoppe. His family, wife Maria and twins Tord and Kjell, were to join him in Florence the following year. His style then entered a new phase, influenced both by the Italian masters and the “Neue Sachlichkeit” in art.

“Badstranden” is like a recollection, perhaps of a summer’s day with Maria and their sons before the trip to Italy. Using the family as a subject was unusual for the artist albeit in harmony with the style of his friends Hjertén and Grünewald. Leander Engström depicts an everyday subject, working in strong colours, the subject liberated from detail. The perspective is surprising for the period with the two women in close-up in the foreground while the boy and the rowing boat are seen from a bird’s-eye view. The lines are sweeping, reinforced by the contours of the bodies and the patterns on the swimming costumes. However, a straight line cuts diagonally through the subject, dividing the canvas into cold and warm areas of colour. Leander Engström’s characteristic cold green dominates, linking the two areas by reappearing in the dress of the woman lying down and accentuating the shadows in the face of the seated woman. 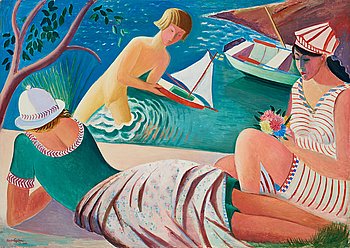 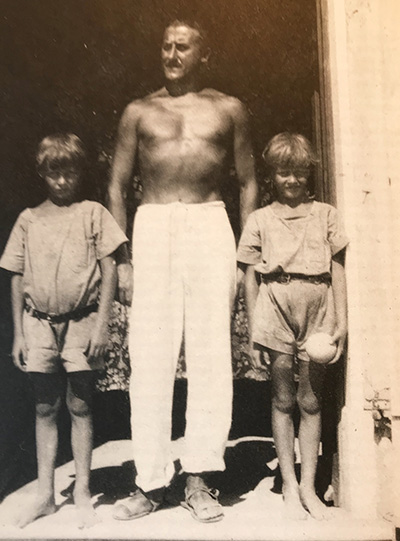