She was born 1873 in the small town of Kimstad in Östergötland, Sweden and grew up in a large family, her father being a vicar. Dreaming about becoming an illustrator and drawing teacher, she studied at the School of Industrial Arts in Stockholm. Her career started within the field of culture and handicraft. With a constant urge to renew the textile art and techniques yet inspired by old weaving techniques from Skåne, her ideas were not always uncontroversial. The fact that she didn’t got to keep her work at Malmöhus County Handicraft Association, showcases some of the restiance against her ideas. After she left Malmöhus County Handicraft Association she started a weaving school. This was before Alfred Nobel’s niece, eventually convinced Märta Måås-Fjetterström to move to Båstad and open her own weaving studio.

100 years ago, when Märta Måås-Fjettersröm founded her studio in Båstad, there were very few female entreprenaours and it was the year when the right to vote had extended to women in Sweden. What made Märta Måås-Fjetterström such a daring pioneer?
Märta Måås-Fjetterström’s seemed to have a never ending creativity. Her art showcasing that she always wanted to create something new. I think this urge to renew and make something different was what inspired her and kept her going, also making her so unique.

Now, it is somewhat the time of the great explosion of interest in crafts, how is Märta Måås-Fjetterström’s legacy carried on today?
Her weaving studio, attracting customers from all over the world and all the rugs and tapetsieres, selling for high prices, is of course her greatest contribution to our time. After her death, at the mere age of 67, she left some 700 sketches. The sketches encompasses i.e. rölakan flat weave rugs, patterns for wall hangings and tapestries, many in paired-down colours, often with plants and animals motifs. Yet today, she continues to inspire textile artist.

Märta Måås-Fjetterström did also hire many female artists and they were soon joined by more weavers. Barbro Nilsson was one of the first who joined the studios, having a bit different but superb command of weaving techniques and colours. One of her masterpieces is ”Snäckorna” constituted a new departure, a rug in gobeläng flat weave. Another is Marianne Richter who was invited to work for Märta Måås-Fjetterström in Båstad during some summers in 1937 also became a renowned textile artist later.

Among the some 700 sketches which Märta Måås-Fjetterström left, are there any pieces that stands out a bit more?
With the nature on Hallandsåsen as an aspect of inspiration, the simplified and down to earth colours of moorland, ”Bruna Heden” from 1931 is the most popular piece. Märta Måås-Fjetterström designed it the year following the Stockholm Exhibition, an exhibition having over 1 million visitors, changed the sceanery for creators of all kinds. It did also have an impact on Märta Måås-Fjetterström’s design.

”Ängarna”, being inspired by the Orient is also one of her most loved rugs which she created for the Swedish American linear M/S Kungsholmen in 1928. Also ”Örtagården”, knotted pile (flossa), with it’s interesting composition, with the colour and pattern combination, is another piece that stands out. 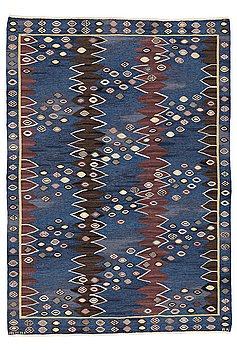 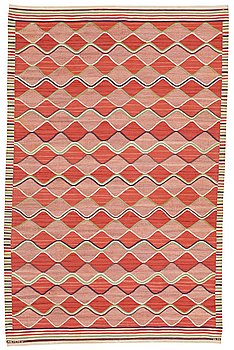 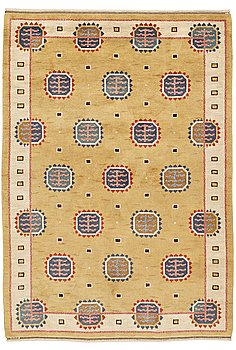 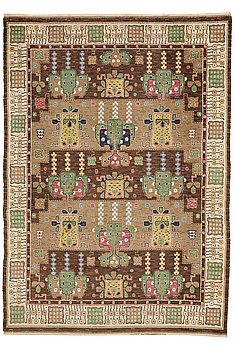 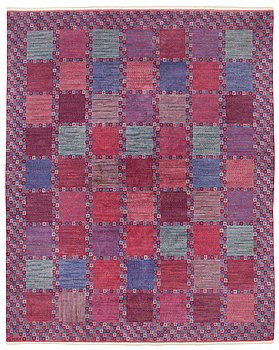 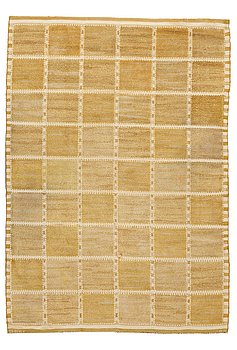 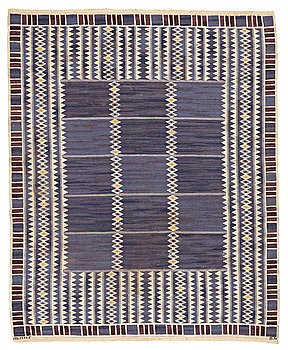 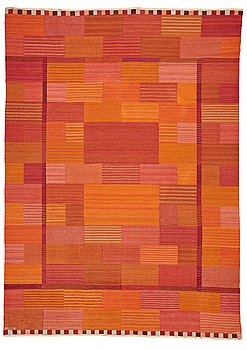 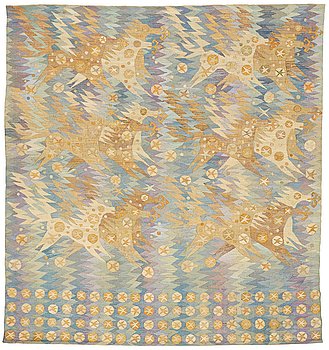