Åsa Jungnelius: ” I am obsessed with what the materials do with us” 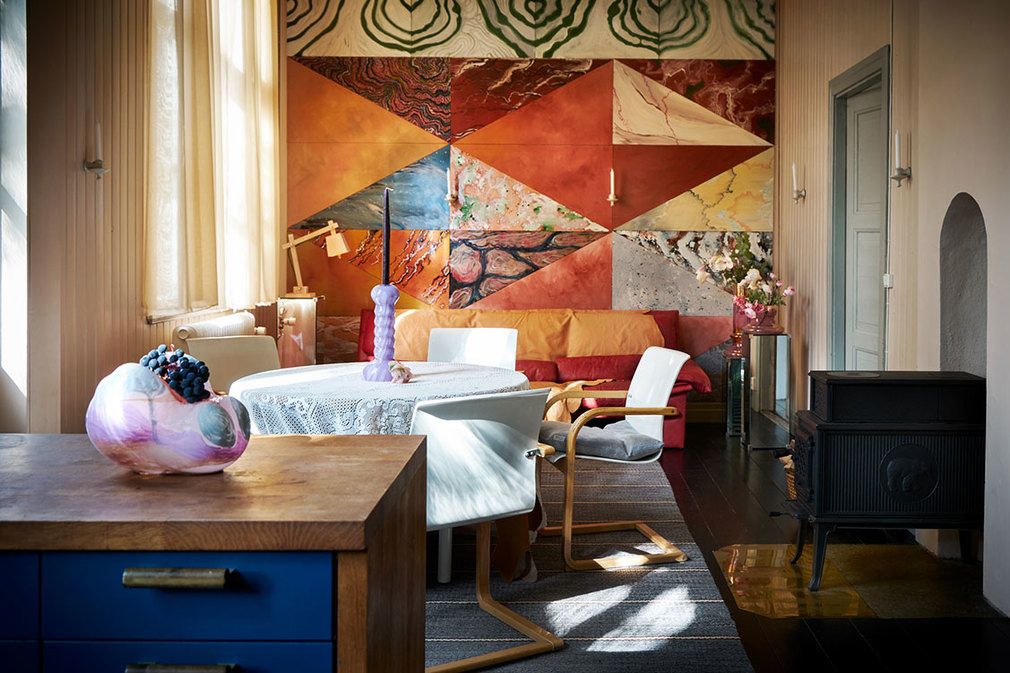 The wall panel in the kitchen is a collective project by the design group, ’We work in a fragile material’. ”We asked if painting is a form of decoration and if one can take painting seriously. We were inspired by Ayasofya in Istanbul”, says Åsa Jungelius. The wall has been shown in the Crystal Gallery in Stockholm. 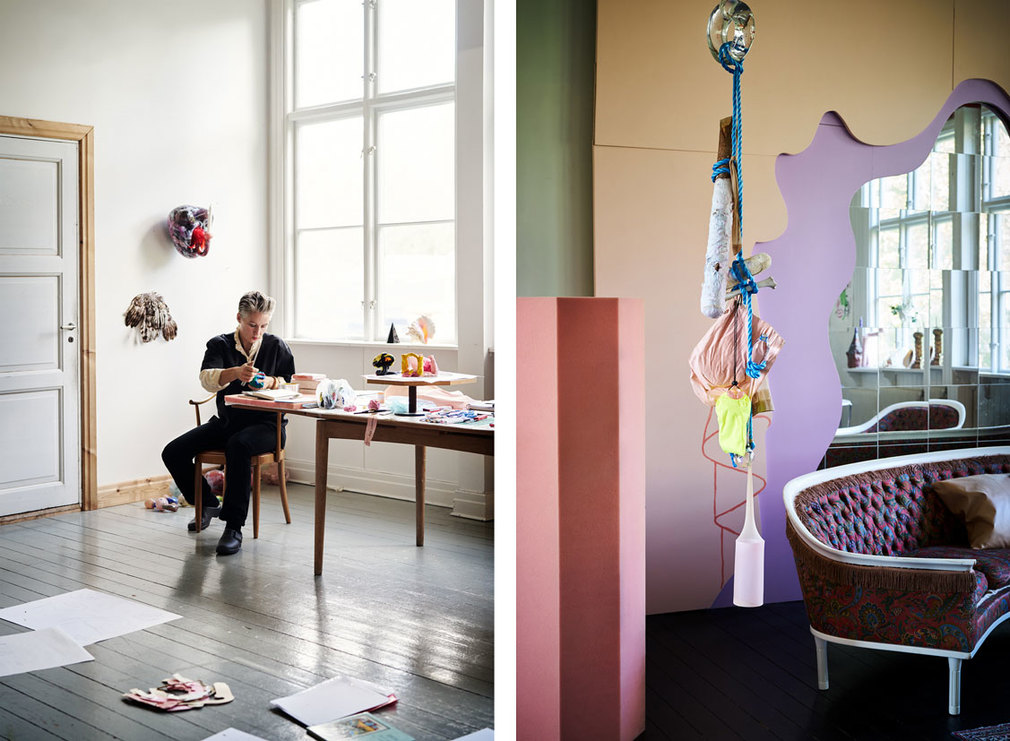 Left: In the downstairs studio, Åsa works on a site-specific work for the harbor in Norrköping. "I move around the house depending on what I do." Right: In the living room is a pink column in foam mattress. The column and the walls behind the sofa are part of the homage Åsa made to Niki de Saint Phalle for the Modern Museum in Stockholm. The assemblage hanging from the roof one of Åsa's sculptures.

Artist Åsa Jungnelius lives in an old schoolhouse in Månsamåla, in the middle of the Kingdom of Glass in the Småland forest. She moved there 12 years ago, when she was offered a job as a house artist at Kosta Boda, 15 kilometers away. Now Åsa has her studio in the house, and does not like to differ between life and work.

Åsa likes to take care of things, some of which are carefully selected, others that she stumbled upon and "is obliged to see the potential in". She finds new use for parts of old sculptures, as well as blends classic design furniture and other finds "without proper order".

"When I am here, I find a focus, a self-loneliness," says Åsa, who also has property in Stockholm. “It is a good house, a kind house. But it was a suicide mission to tackle it.” The house is deserted in the forest and was not even a residential house when Åsa took over. She renovated it for a long time and says that the house is in different phases even today, with different people living there for various periods of time. 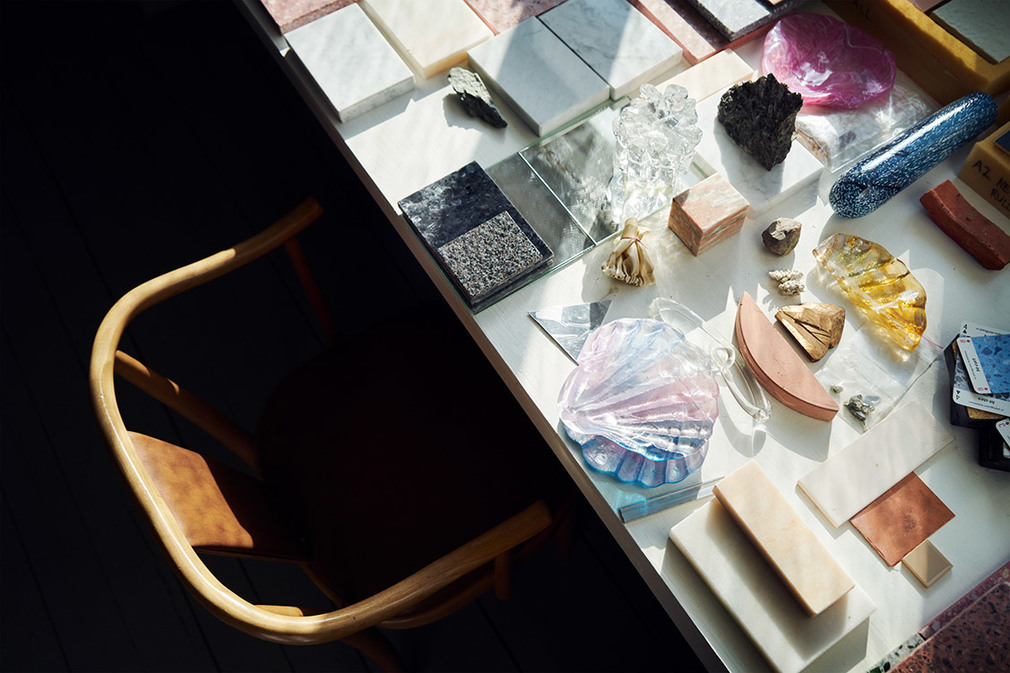 Material samples for ”Snäckan” (”The Seashell”) in the upcoming metro station Hagastaden. The brown chair is a work chair that circulates in the house. 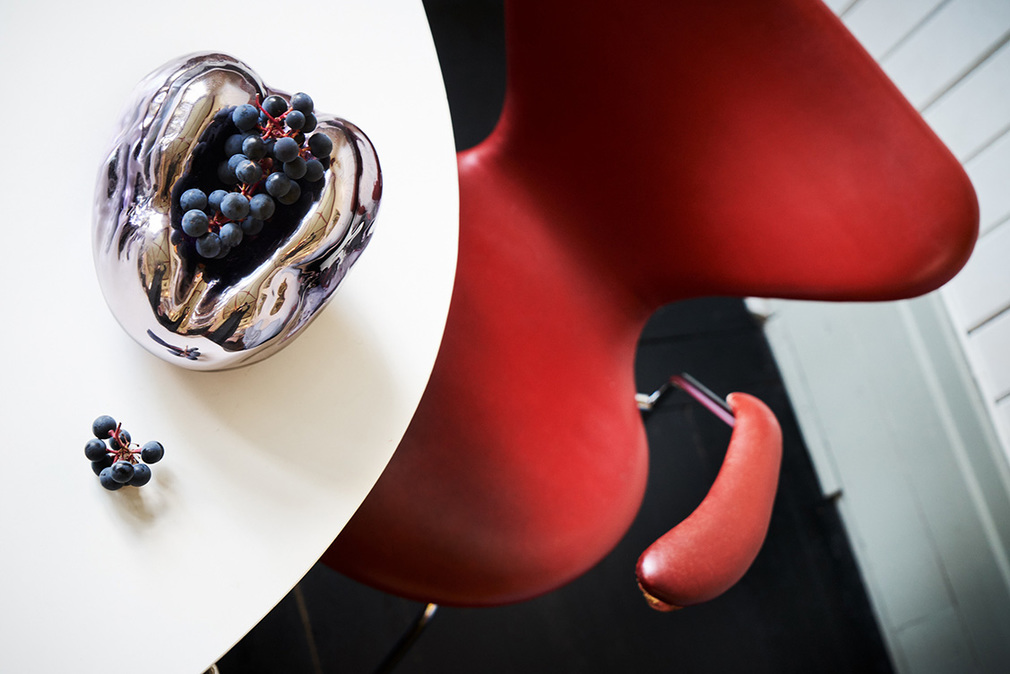 Åsa made the snippet for the first time as a large and well-thought-out work. In recent years, she has made it as a small utility item and as the installation Snipp Dipp - a table setting as a social act, with curtains, food, candles and bowls. ”Seven chair” by Arne Jacobsen.

Åsa grew up in Fisksätra in Stockholm with no connections to art, yet with a sensitivity to rooms and materials. In the beginning it was an obstacle Åsa did not know what to do with, but as sensitivity was a need, it gradually became a driving force. She learned glassblowing when she was 17. ”I was an angry, restless teenager, who fished hey wildly to find a place to get rid of my excess energy. I met a girl in a parking lot with a glass ball around her neck, which she had made herself in a school in Småland. I wanted to do that."

Åsa was completely occupied by the glass, "in both brain and body". She continued to Konstfack in Stockholm. Åsa returns to glass as material even today. She likes the transparency and the glossiness, but also because "we want to think that the beauty is good, but it is clearer than that".

Common to Åsa's project is that she sees the material as a language, linked to how complex society is and how we perceive our time. By changing and linking material and materiality, we can change a contemporary, a power relationship, a gendered power system and how we are to each other. “The material binds us together and can change us. It means different things in different contexts. We think the phallus shape means power, but what happens if it becomes a cute candlestick? It is no longer potent”, she says. 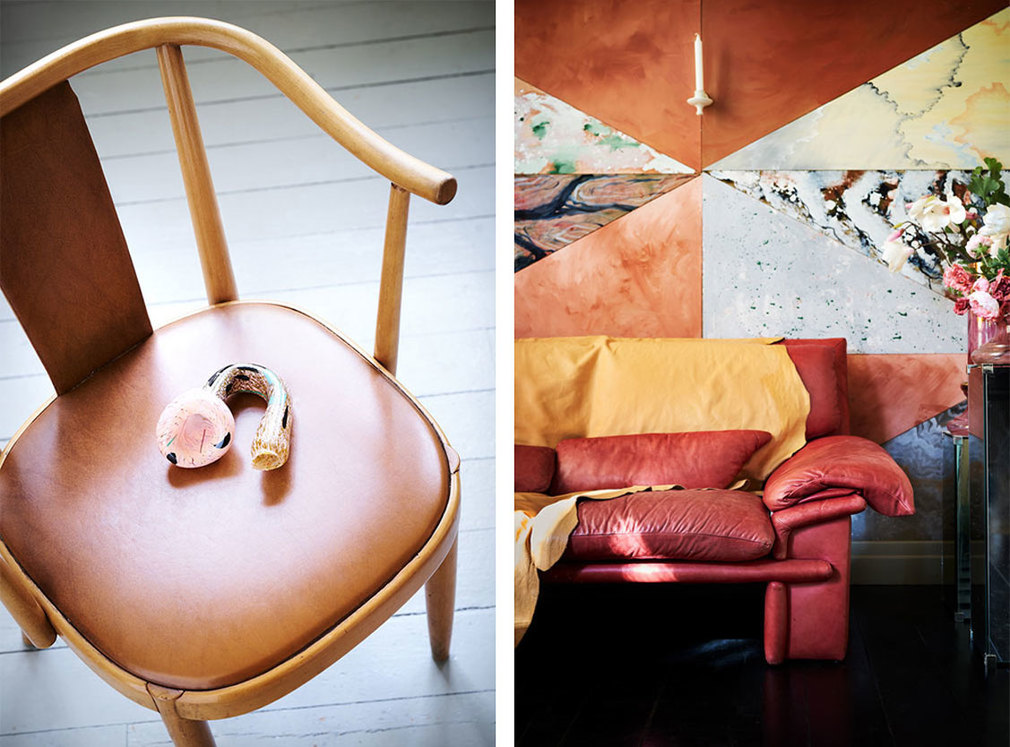 Left: "A half grunke”, which is a small part from a lamp. Right: A red, Italian couch, "a wretched 80s dream with giant armchairs added". 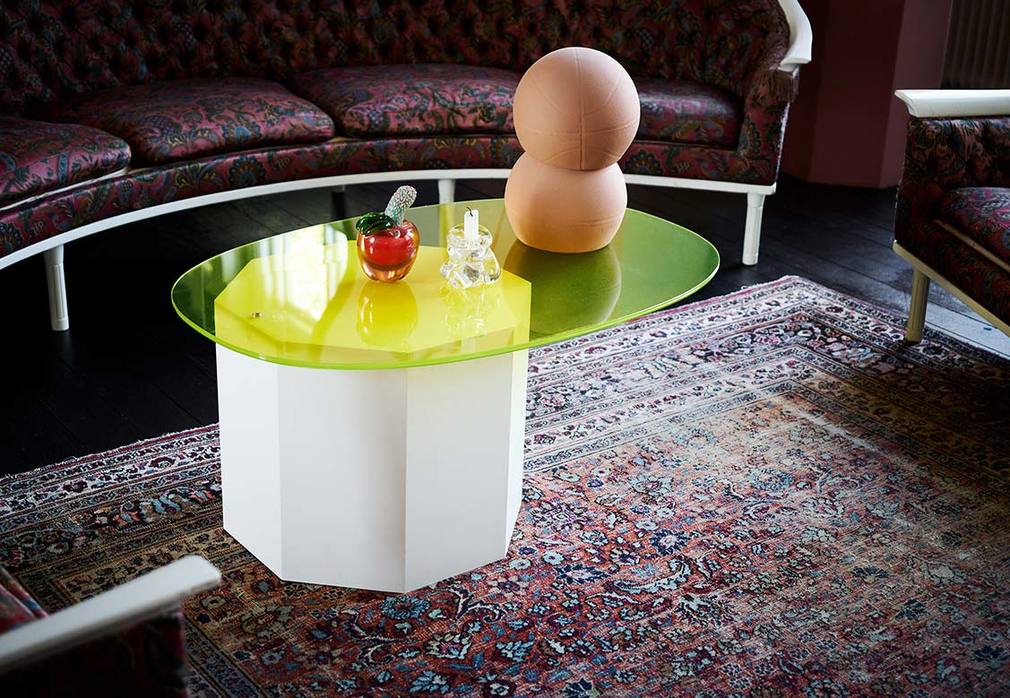 Regarding the table, Åsa talks about the geometric invention of the 1950s super-ellipse. She thinks that belief in a form via a mathematical formula is “completely bananas”, but that it is fun to look at it as a form today. 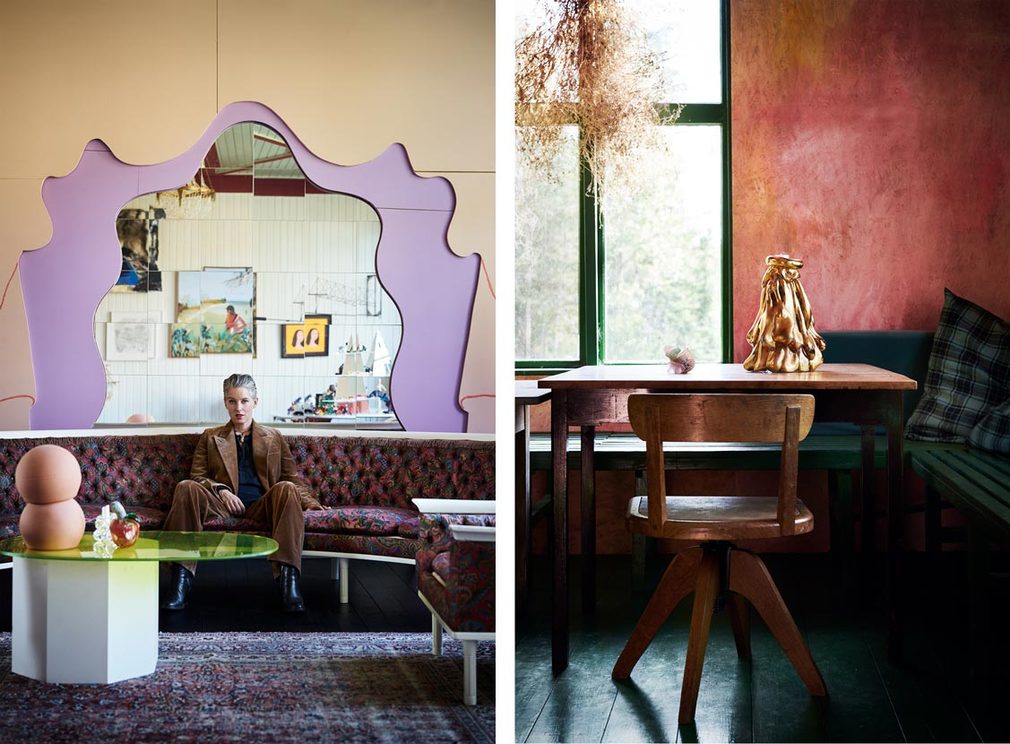 Left: The banana-bent sofa was found by a friend at a local carpentry shop. "It's a friendship sofa, I love the shape, it gives a little hotel foyer feel." The terracotta basketballs on the table are made by Magnus Mattsson, while the apple was part of a homage to Ulrica Hydman Vallien for Kosta Boda's 275th anniversary. Right: The front porch. Åsa mixed the colours for the wall itself and painted directly on the OSB board. "The melancholy feeling feels a little punkier, rough but caring."

Currently, Åsa is working on everything from the art project Residence in nature, which examines, among other things, the concept of nature - to live and work in the material as a method - to developing the artistic decoration of Stockholm's new metro stations. In Hagastaden you will walk into a seashell - a representation Åsa has worked with on different scales before. ”The Seashell” is a tribute to motherhood, and Åsa believes in the power of the hole. In the center of the station, ”The Seashell”, lies a climax point, a core. This will be in white marble.

To the theme auction