”Staden I” by Marie-Louise Ekman at Contemporary Art & Design 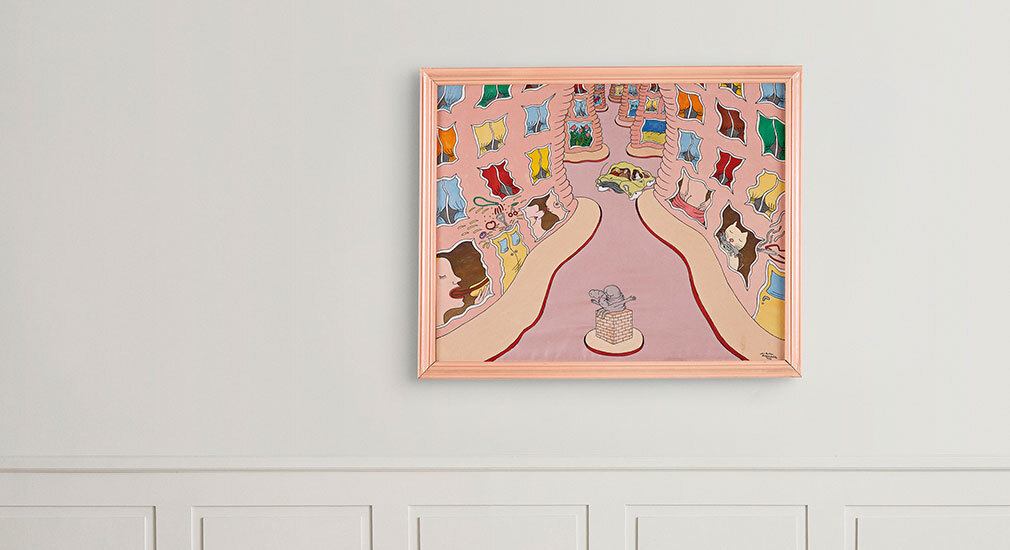 "Staden I" by Marie-Louise Ekman 1976. To be sold at Contemporary Art & Design on 12 November.

Bukowskis is pleased to present an artwork by Marie-Louise Ekman

Signed Marie-Louise De Geer Bergenstråhle, like all her work during the 1970s.
It represents an especially productive period in her life. She predominantly used two painting techniques: oil on canvas or gouache painting on silk. In both cases she employed, as a rule, black outlines similar to comics. The paint had to dry before the outlines were added using a very fine marten-hair brush. If it was made with oils the drying period could be as long as three weeks before the outlines were painted on. Gouache paints dry quicker and the outlines could be applied after a day or two.

‘Staden I’ has an unusual story behind it. Ekman had participated in an art fair in Paris with her then gallerist Jan Runnqvist, who ran Svensk-Franska Konstgalleriet and Galerie Bonnier in Geneva. Two large oil paintings by Ekman were amongst several works of art destroyed in a fire at the art warehouse where they had been stored.

As a result Ekman decided to redo the painting ‘Staden I’ from memory. She did this using gouache painting on silk and in a slightly smaller scale than the painting destroyed in the fire. The style is wonderfully precise.

The underlying colour of the silk emerges in the surface of the street. The motif is typical of Ekman at the time. She employs the same ‘street idea’, with absurd scenes visible through windows, in her films ‘Hallo Baby’ from 1975 and ‘Mamma, pappa, barn’ from 1978, as well as in many of her paintings.

The sculpture in the middle of the street is also typical of her 70s period. It is an absurd anti-style, mocking of culture.

The colour pink has been, and continues to be, a favourite right through her artistic career. In her latest exhibition at Galleri Bohman-Knäpper in October 2019 pink is everywhere. During a long artistic life, including periods as the director of the Royal Institute of Art and the Royal Dramatic Theatre in Stockholm, her desire to shock has abated and been replaced with a distinct sense of melancholy. But what endures is her remarkable and individual perspective on the world.

She observes our civilisation, our lives, our homes and our streets as if she was a sharp-sighted spectator from outer space. The present painting is a striking example of this. 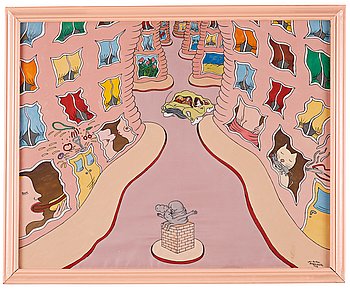