Emma Rosenzweig: "I want my home to be a place where people sing, dance, cry, eat and love” 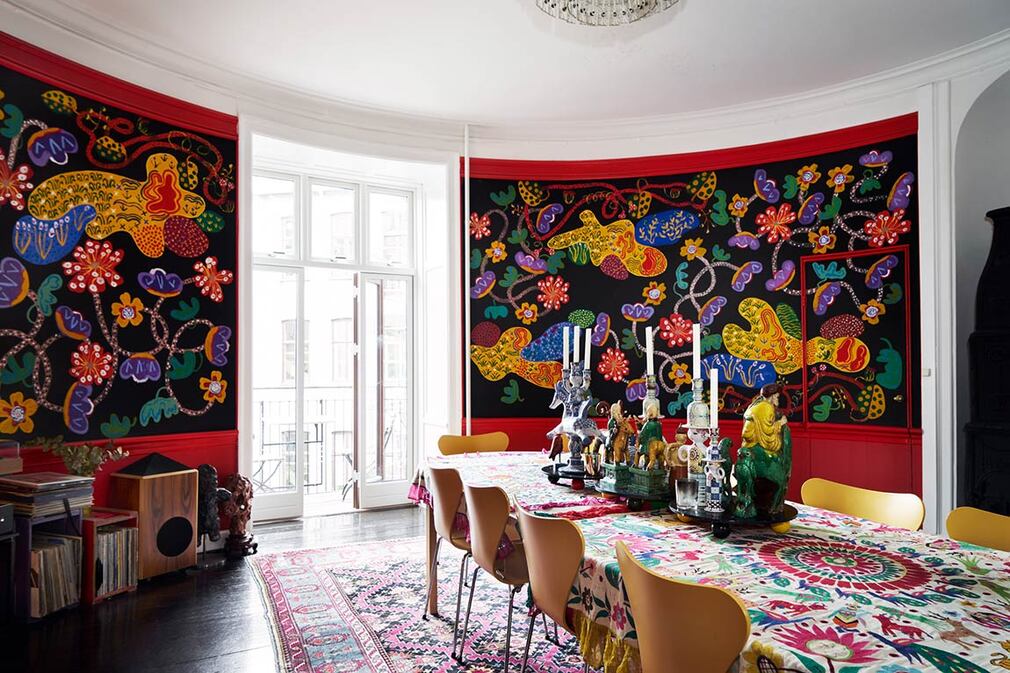 Above: "My husband Tal painted the round dining room while I was pregnant. It’s in this room we gather when we have a lot of guests over for dinner. It’s also the place where we dance. Almost every afternoon the whole family gathers to run around the table dancing and singing along to loud pop songs." 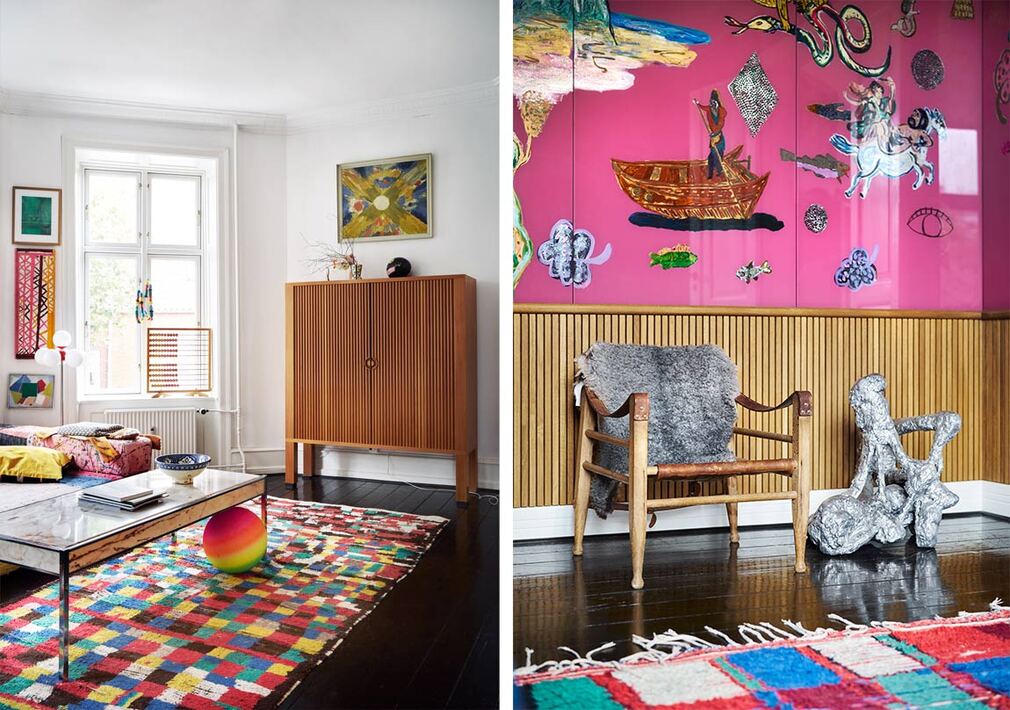 Left: "My husband really likes this old table with chairs from Alvar Aalto. It looks like something from an institution and in a way the table is also functioning as the institution of our apartment – this is where we eat and discuss the daily doings of our lives, every single day." Middle: "Our bedroom. The blanket on the bed has been made by my friend Lulu Kaalund. She makes beautiful blankets with her own hands, she’s always working on a new one, and I have the first one she ever made. It helped her out of a serious concussion, that’s how she started making the blankets, and now she’s unstoppable." Right: "The kitchen is the second most important place of a home if you ask me. I find meditation in cooking food and I keep a kitchen diary where I write what we eat, where we buy the groceries, what recipes I use, who joins us for dinner and what we talk about."

Left: "The filmroom. My husband has made the sofa and the tv-cabinet is designed by Rune Bruun Johansen. My husband collects abacuses so the windows in our livingroom is full of them." Right: Sculpture by my husband and an old chair from my father. In our bedroom–also one of the most important rooms of the home."

Someone told film student and model Emma Rosenzweig that moving every seventh year is a good idea. Soon, she's leaving her colorful pearl in Østerbro. We pay a visit and ask how it feels.

Emma Rosenzweig is back for another semester of film studies at the the Städelschule in Frankfurt, which means a lot of traveling back and forth from her home in Østerbro in Copenhagen. Alongside her studies, she works on several projects (you might have seen her in the role as a model) and performances in Copenhagen. Right now, she’s writing on a feature film.
When she doesn’t work, she cooks food and reads a lot of books (right now she makes Persian soups and reads Virginia is for Lovers by Danish author Christina Hesselholdt, an autofictional book about an absurd American murder case from the 80’s).

Her home means a lot to Emma, it’s the place where she can rest and be private. ”It’s also the place where I can be the opposite. I’m very schizophrenic when it comes to being social. On one side, I love to be around a lot of people, on the other side I get crazy if I don’t get time alone.” She and her husband, artist Tal R, and their kids are actually about to move out of the apartment they have called home for four and ten years respectively.

”A lot of things, both good and bad, stay in the walls of the place you live, and I heard somewhere that it’s a good thing to move every seventh year. So things won’t get stuck.” Emma looks forward to starting over somewhere new, making a new story. ”But the move also means there is a big melancholy about being here at the moment. Soon, it will be over.”

The apartment is full of colors. Emma and her family likes to hang things on the walls. ”We really just work a little bit like hoarders or crows–we collect things.” She remembers growing up in modest homes. Neither of her parents had a lot of money, her dad studying psychology and her mom teaching at a film school. Her dad had paintings made by friends and collected bamboos, he also had a waterbed and his apartment was mostly full of books and not much else. Furniture and decor wasn’t an important thing. ”I guess maybe that’s the reason I have been collecting so much crap since I moved from home when I was 16.”

Emma wants her home to be a place where the people she loves feel welcome. ”I want it to be a place where people sing, dance, cry, eat and love. I don’t want a place thats just clean and unused, I think those are the places I find most scary. A home that looks like an exhibition, you feel it immediately when you enter; it’s somewhere to be shown off to people but no one ever really sat naked in the sofa all by themselves.” 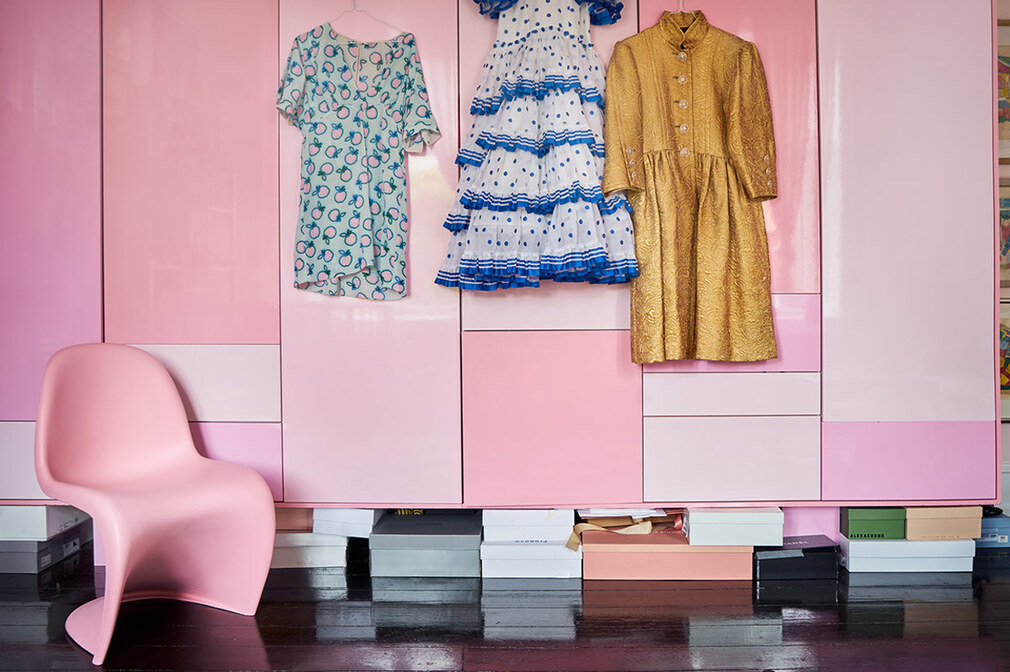 "The pink closet. We are moving from our apartment soon, and one of the things that I’m looking forward to is a new closet. Even though I have enjoyed this pink one, it’s always nice to put your clothes in new surroundings. I take clothing very seriously. So many of my dresses carry a myth and story and I don’t dress up for fun, it’s an important thing for me."

Left: "A sculpture by my husband." Middle: "I bought the pink Verner Panton chairs many years ago and just can’t shake them off." Right: "We bought this cabinet to put our son’s toys away in. It looks like candy so it makes sense that its full of playstuff."