Rirkrit Tiravanija (b. 1961, Buenos Aires) is without doubt one of the most influential artists of his generation. His work continues to explore the possibility of creating spaces where people can meet, even in today’s modern technological society. This is particularly evident in his now iconic performance, begun in the 1990s, where he cooks food in the gallery for the visitors. There is often a strong political undertone to his work and it is always multi-layered.

The Revolution will come in Every Direction is part of an ongoing series of works where Tiravanija collaborates with Tomas Vu. Together they create printed text on newspapers that generate unexpected parallels and raise questions about our current political and cultural climate. Vu has been a professor at Columbia University since 1996 and is the founder of LeRoy Neiman Center for Print Studies. He has executed and overseen a number of collaborative print works with, for example, artists such as Kiki Smith, William Kentridge, Jasper Johns and Kara Walker.

In the present piece, silkscreened on a page of the New York Times, the text reads “THINGS THAT QUICKEN THE HEART” and includes an image of Jean-Michel Basquiat. It is a slice of contemporary life where news of nationalistic riots alternate with the state of the labour market and Elon Musk’s Tesla.

"The Revolution Will Come in Every Direction" by Rirkrit Tiravanija & Tomas Vu. Signed RT and TV and dated 18. Silkscreen on newspaper 56 x 59. View the artwork in the online catalogue here > 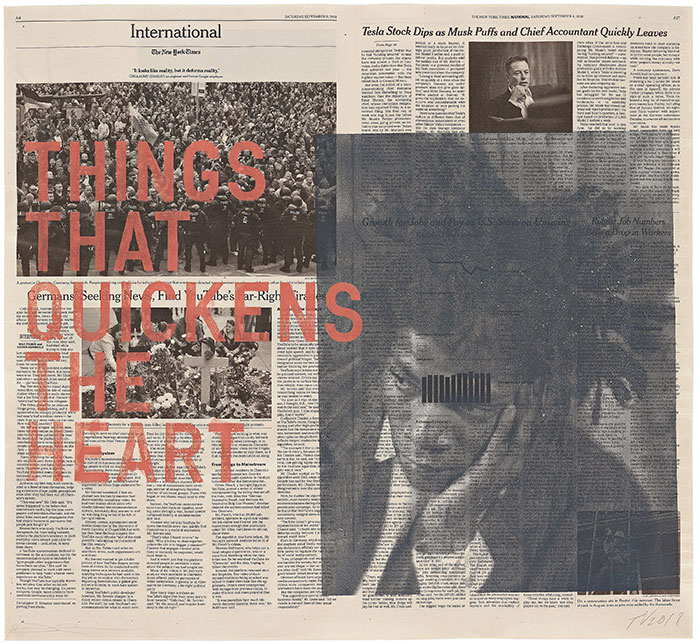