Helsinki was under heavy construction towards the end of the 19th century. Travellers and tourists arrived at Helsinki either by train or steam boat. Those who came to the Finnish capital by boat were welcome by the Market Square and two churches: the red Russian Orthodox church as well as the white St Nicholas’ Church (now Helsinki Cathedral). During the autonomy, freedom of religion was apparent from the various church buildings in the capital, and this freedom was also substantial to the country’s national spirit. Edelfelt often painted the harbour area, with St Nicholas’ Church appearing as the symbol of Finland as a site of tourism, such as for the Paris Exposition Universelle of 1889, with tourism as one of the themes.

Another reason for this interest towards the harbour area was purely personal. His mother and sisters lived in the Sunn House at Aleksanterinkatu 26, the same house where Café Engel is now located. St Nicholas’ Church was the family’s home church and groceries were purchased at the Market Square.

When Edelfelt, together with his wife, children and the nanny, visited Helsinki in late 1890s, they most probably stayed at Hotel Socis, then Societetshuset (now the City Hall). The hotel, designed by C.L. Engel, was an active centre of amusement. People could sit at the balcony waiting for the steam boat, and the festival hall hosted concerts with works of Sibelius, among others, and the first film performances. The Lumière brothers’ first film was performed to the public only six months after the première in Paris in 1896.

Edelfelt had painted this winter view over the Market Square and the recently built Old Market Hall with shoppers, workers, draft horses, street dogs and sauntering ladies of society, as a still image of the city’s pulsating life. This view is what he saw from one of the windows of Hotel Socis. The Old Market Hall, designed by Gustaf Nyström, was opened in 1889. Finland's first market hall was established mostly for hygienic reasons. For the gourmand family Edelfelt, this was certainly a topic of discussion. In Paris, Ellan Edelfelt indulged her husband with ingredients purchased from the best gourmet shops of Paris. The family's maid shopped for groceries at Les Halles and had promised to take Edelfelt’s sister Berta for a tour in 1889. The cook pointed out that it was customary for ladies to stroll through Paris market halls with companions. The world of food was a part of women's sphere in a similar manner as sauntering in department stores or visiting exhibitions. In Paris, fine ladies would never walk outdoors unaccompanied, and the same applied to Helsinki as well. To the right, Edelfelt has portrayed two charming young ladies on a stroll with an elder lady chaperone. Saunterers had their own territories, and, according to chronicles of Helsinki, those speaking Finnish would walk on the southern side of Esplanadi and Swedish-speakers would promenade along the northern side. All social classes would meet at the square. In this picture, we can see the harbour messenger, old women with brooms and some young gymnasium students in Russian uniforms.

Of the three known works that Edelfelt painted of the Market Square in winter 1890, this version now on sale is the best-known. It was exhibited in Edelfelt’s private exhibition at the Fire Brigade Hall in the late months of 1890. This winter view of the Market Square appears in the book Finland i 19:de Seklet (Finland in the 19th Century, 1893), illustrating the chapter on Uusimaa with a long introduction on Helsinki. 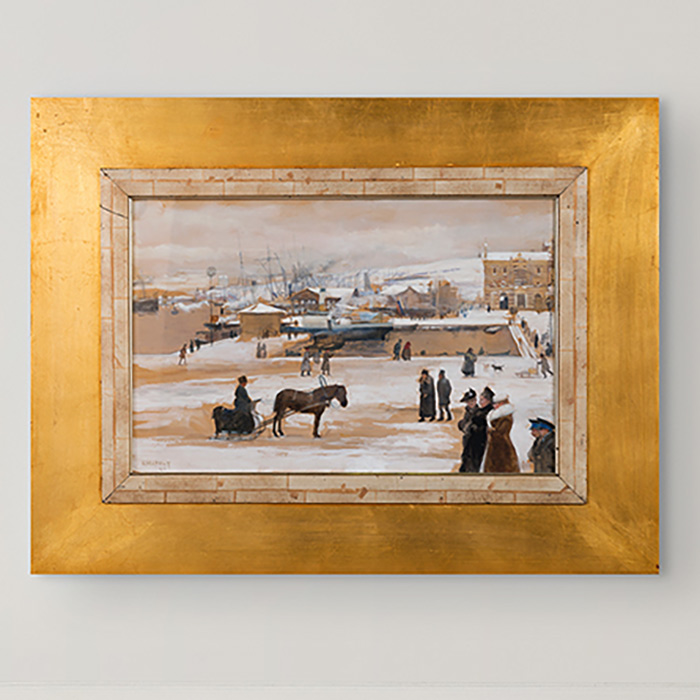