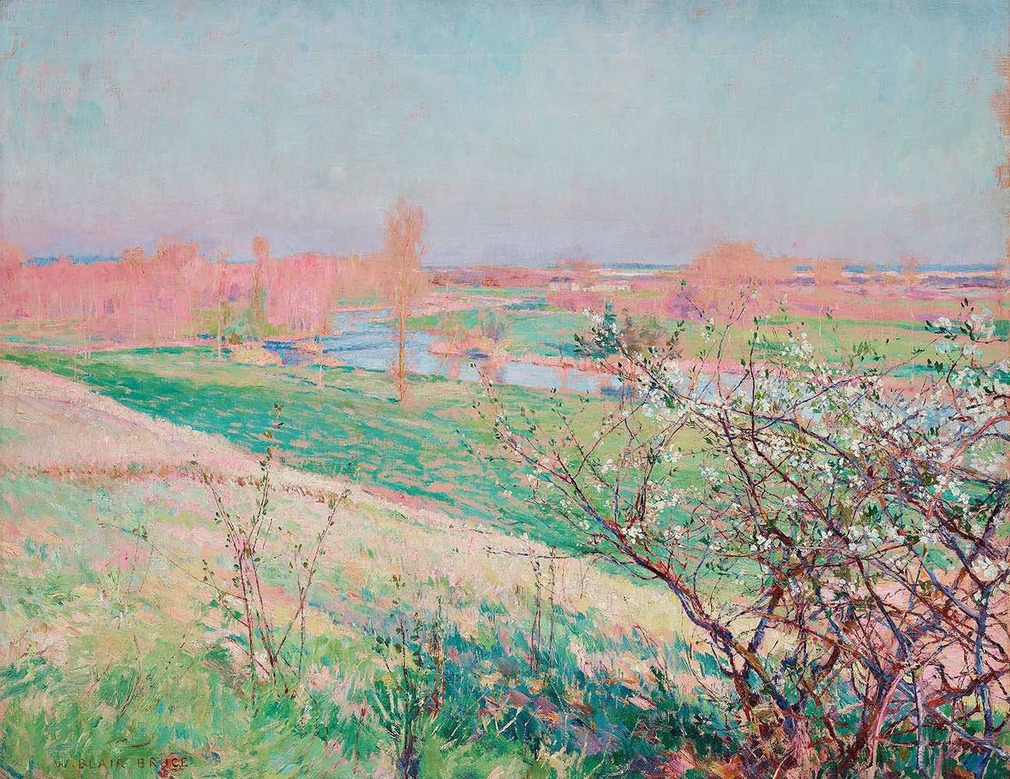 It was in Barbizon, Fontainebleau and the surrounding areas that the first generation of French outdoor painters worked from the 1830s. A few decades later, these places would be populated by a younger generation of Swedish as well as international artists, most of whom became prominent in the new French-oriented landscape painting. Hugo Salmson is said to have been the first Swedish artist to visit the village of Grez, just south of the Fontaineblea forest, in 1874. Two years later, Oscar Törnå followed in his footsteps but did not appreciate the light, but instead sought his motifs in the cool light dark of the Fontaineblea forest. In April 1882, however, Karl Nordström arrived in the company of the Norwegian artists Christian Krohg and Christian Skredsvig. Unlike Törnå, Nordström (in a letter home to his brother) found the area around Grez "delightful beautiful, the weather perfectly summery, gentle rainforests, greenery and full of flowering fruit trees".

In the following years the group of artists in Grez was expanded, where a vibrant international artist colony operated in the mid-1880s. One of the artists attracted by Karl Nordström was Carl Larsson. After arriving in Grez in the early summer of 1882, Larsson wrote in a letter to August Strindberg: “You cannot imagine what poetry might be in such a petit village; a beautiful tree-lined river, a leafy and almost impenetrable bois on one side and possible cornfields on the other [...] The sun that radiates and gilds this is an endless credit ”.

It was also the sunlight and the open spaces that attracted this generation of artists. The realistic landscape painting practiced in Grez-sur-Loing was characterized by a pale color scale often dominated by bright ocher tones, gray, light blue and green. The landscape painters were attracted by the hazy French air's ability to match the landscape's colors in a uniformly light tone where strong contrasts and contradictions were lacking.

Despite a strikingly high Swedish presence, the artist colony in Grez was far from a true Swedish or Scandinavian affair. On the contrary, there were significant international elements, which have been shown, among other things by Alexandra Herlitz in her doctoral dissertation "Grez-sur-Loing revisited. The international artist's colony in a different light" (University of Gothenburg, 2013).

Canada's contribution to the Grez artist colony was William Blair Bruce (1859-1906). Bruce had arrived in Paris in 1881 to study at Académie Julian. The studies were supplemented by study trips to Barbizon where Bruce became acquainted with outdoor painting and impressionism (Bruce is today considered one of Canada's first impressionists). In 1885 Bruce Grez visited where he met, and fell in love with, the economically well-off Swedish artist Carolina Benedicks (1856-1935).

The couple engaged in 1886 to finally marry in Stockholm in December 1888. After a long honeymoon to the French and Italian Rivieres, the spouses returned to Grez in May 1889, whereupon Bruce wrote to his mother: "Grèz is a great improvement on Barbizon, quite a different country in fact ". Grez-sur-Loing then came to occupy a special place in the spouses' hearts. Johanna Pietikäinen writes in "Grez-sur-Loing. Art and relationships" (exhibition catalog, Prince Eugens Waldemarsudde, Stockholm, 2019):

"Benedicks and Bruce came to live abroad for nearly fourteen years, between 1888 and 1902. They lived mainly on Benedick's wealth and moved unlimited in Europe. Country life, then big city, then rural life again - social life alternating with straw hats. they had the pavilion in Grez as one of their homes, from May 1889 to the end of 1894. During these years, however, they also lived for long periods in other places and traveled to Paris regularly, but Grez is actually one of the places that Benedicks is calling for "home" in his calendar. It is also one of the few places that Benedicks and Bruce spent several years in a row."

During the years 1900-1906, the spouses allowed the summer home Brucebo to be built on Gotland (since 2009 a museum managed by the Brucebo Foundation), where artistic activities were interspersed with socializing and recreation. Carolina Benedicks-Bruce settled permanently in Brucebo after William Blair Bruce quickly died of a heart attack in Stockholm, aged just 47, November 17, 1906. After Bruce's death, a memorial exhibition was held with 122 of his works in Paris in 1907, after which Carolina donated 29 works for Bruce's hometown of Hamilton, Canada. This donation formed the basis for what is today the Art Gallery of Hamilton, which opened in 1914.

It is very gratifying that the Important Winter Sale 2019 contains a private significant collection of works by William Blair Bruce. His artistic production appears very sparingly on the market, partly because of the tragic shipwreck in 1885 when the ship "Brooklyn" lost in the sea with 200 of his works in the cargo. In addition to the impressive spring landscape "Printemps, Grèz (Seine-et-Marne)", the present collection is comprised of the well-composed winter motif "Hiver à Grèz (Seine-et-Marne)", the colorfully tuned image of "The sculptor Ville Vallgren's home in Finland" as well as an evocative depiction of the Parliament House in evening lighting.

View all works by William Blair Bruce in the catalogue here > 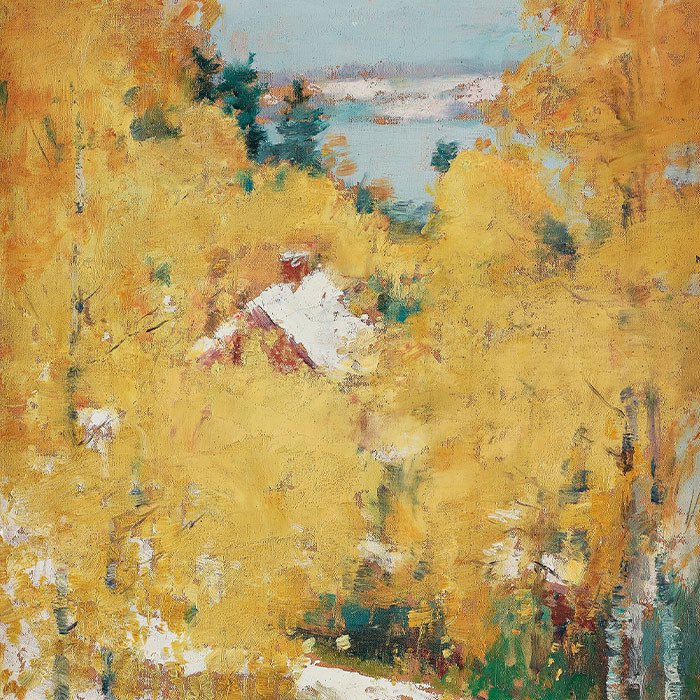 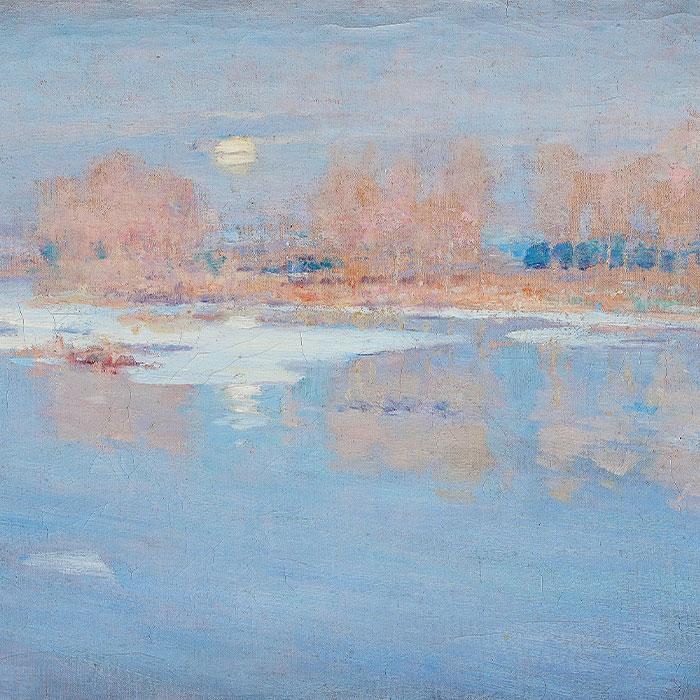 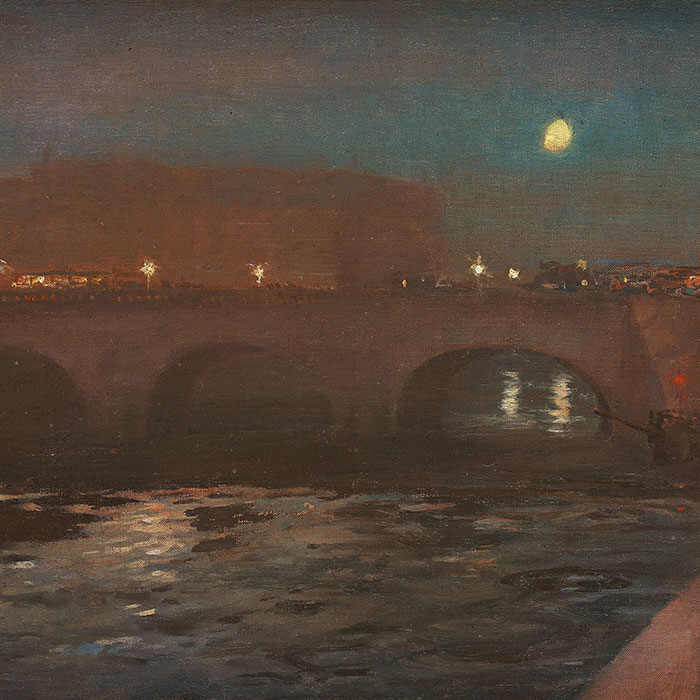 The Swedish parliament building at night

For condition reports and further questions, please contact our specialists: