“I want to be as famous as the Queen of England”

Andy Warhol’s world is made up by many beautiful, strong and famous women. He has through his work made them even more iconic and his fascination for women can not be denied. Most of the women he portrayed are from the world of pop culture but in 1985 he started his work with royalties in the series “Reigning Queens”. In the series, consisting of four screenprints in four colour variations, he portrayed four (at the time) reigning queens: Elisabeth II of England, Beatrix of the Netherlands, Margarethe II of Denmark and Ntombi Twala of Swaziland. In the series Warhol continued his practice of manipulating existing photographs and the repetition of the portrait showcases Warhol’s interest with mass imagery, as they are reminders of the royal portraits printed on postage stamps and currency. It would not be right not to point out that each queen that Warhol chose for the series where queens by birth, not by marriage and it is possible Warhol intentionally created this portfolio as a symbol of female autonomy and power.

At the Important Spring Sale we will offer one of the prints from the "Reigning Queens" series – "Queen Ntombi Twala of Swazliand".

Do you have a similar work that you would like to evaluate and consign? Welcome to contact our knowledgeable specialists for a valuation prior to your sale. 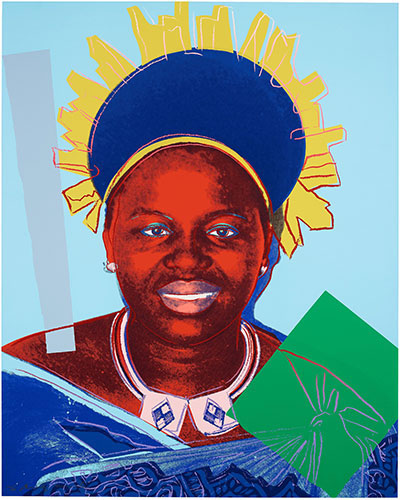