During his short life, Keith Haring came to define the dynamic and unique cultural environment that evolved in the lower parts of Manhattan, New York. His explosive and direct expression originated from graffiti and the first piece of art he created was drawings in white chalk on the subway's empty advertising signs.

Keith was born in 1958 in a middle-class suburb of Reading, Pennsylvania. He was fascinated by the popculture of the time and showed a talent for drawing already as a young man, leading to studies at the School of Visual Arts in New York. He arrived in New York during times of change. Classic high culture and wild nightlife were mixed, the contrasts between poverty and abundance were obvious. It was in this melting pot, with artists such as Jean-Michel Basquiat and Kenny Scharf, that the art of a new generation sprung.

“Drawing is still basically the same as it has been since prehistoric times. It brings together man and the world. It lives through magic.”

In 1982, Haring had his first solo show at Tony Shafrazi's iconic gallery in Soho, which became the start of his career. It was shortly after this, in April 1983, that he completed the drawing "Untitled" now auctioned at Bukowskis.

In his paintings he created a visual language using symbols, “icons”, which makes his images both typical for the 80’s and timeless at one and the same time. The snakes seen in "Untitled" are such a recurring timeless motif. The snakes could be interpreted as a reference to Christianity where the snake symbolizes, among other things, sin. 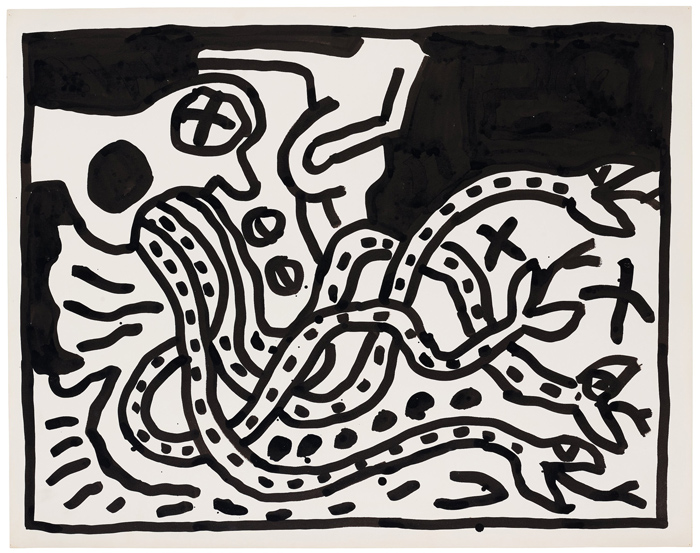 Keith Haring himself described his motifs with the following sentences: "The images are part of the collective consciousness of modern man. Sometimes they stem from world events, sometimes from ideas about technology or people changing roles in relation to God and evolution. All of the drawings use images that are universally "readable". They are often inspired by popular culture. "

The work will be sold at Contemporary Art & Design Sale on 17 June and on view 11 –15 June at Berzelii Park 1 in Stockholm, Sweden.