One of spring's most exceptional highlight 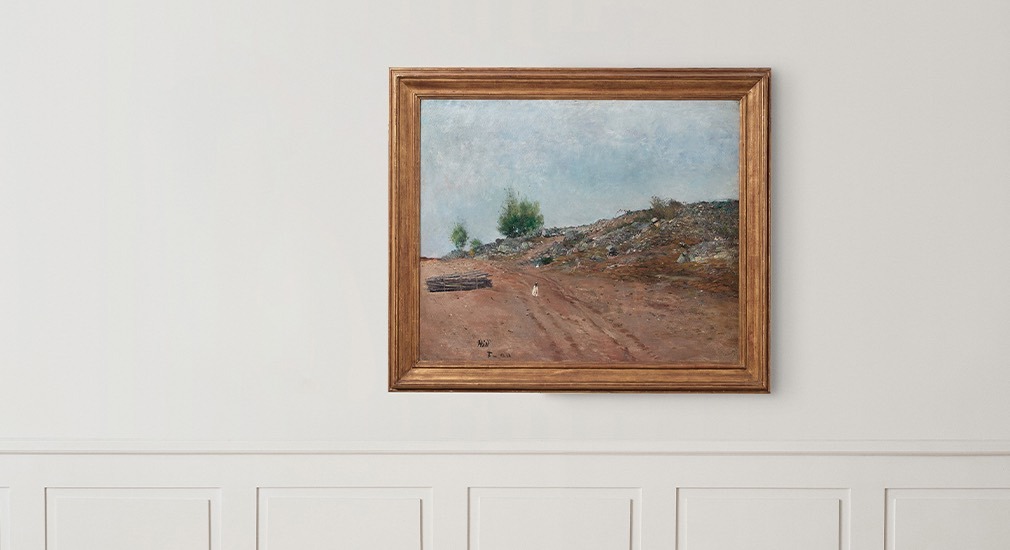 In 1876 Carl Fredrik Hill executed a number of similar landscape paintings depicting gravel roofs or sand slopes. ”Väg med sittande hund, Fontainebleau” occupies a central place in this remarkable group of terrain studies, which are joined by the sometimes similar basic compositions where often an open, slightly hilly terrain is partially confined to the horizon by a rising forest backdrop.

The current catalog number that will be sold at Important Spring Sale has striking similarities to "Forêt de Fontainebleau" (oil on canvas, 81 x 100 cm, 1876, Sven-Harrys Art Museum, Stockholm, sold at Bukowski's Spring 2003), which is painted at the same location on the same occasion. It is not at all impossible that the similar compositions were performed only a few days apart. The landscape has, in these paintings, been depicted with tangible, sometimes brutal, truth, but the artist has not excluded poetry altogether. A pleasing leveling French light rests over the foreground while at the same time it makes the bush's sheer greenery play pleasingly and beautifully against the blue shimmer of the sky behind.

Hill's living artist Adolf Anderberg, in his extensive work "Carl Hill. His Life and His Art" (1951) takes up 1876 landscape paintings by Fontainebleau as follows:

"This desolate rocky ground nature over which the sun had free play seemed to transform both his color vision and way of production. He felt liberated, freed from the enchantment of the dark Barbizon forests. [...] Nature's greatness, its solitude, its oblivion spoke directly to Hill's mind, he was gripped by a strong sense of communion with these fates, in interpreting them he drew much of what was burning and burning in his interior. Self-portraits of the artist could not seem more revealing than these in a mostly ecstatic mood pictures" 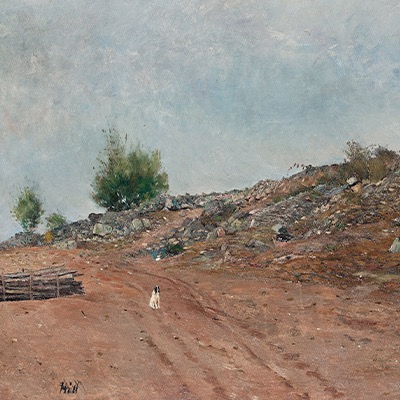 There is much to say that ”Väg med sittande hund, Fontainebleau” is a further development of ”Forêt de Fontainebleau”. The composition is still divided diagonally by the road from the right and the logs remain in place. Hill, on the other hand, has moved the easel to get closer to the gravel roof and penetrate deeper into the composition. The most striking difference between the paintings seems to be how Hill let the man in ”Forêt de Fontainebleau” disappear from the picture to be replaced by the white dog with black ears, which, sitting in the middle of the road, is an inevitable eye-catcher. The lone dog is, as Anderberg writes,

"A temporary combination, perhaps, which, however, adds a suggestive mood to the subject".

Viggo Loos goes further in his reasoning: "It seems as if the artist felt the need for a living being in this landscape of sand, stone and shrunken trees, where he struggles with the problems of light and penetrates the weathered ground's color play into life ("The open-air painting's breakthrough" in Swedish Art 1860-1885 ", 1945).

These depictions of "the weathered ground's color play" constitute a remarkable transitional phase in Hill's painting, which would later lead to the blossoming fruit trees' surreal beauty in the spring of Brolles / Bois-le-Roi in 1877. Viggo Loos, again, writes:

"He wants to penetrate nature's changing spectacle into life, to find something that corresponded to the hot pulses of his own life-affliction and unsettled beauty. The shadows disappear, the light and the color shake in these images from the hot sandy terrains, the shattered ground, the wide lighthouses. Such is the prelude to the new stage, which for a couple of years let the curve reach its peak".

Viggo Loos also gets the last word through his description of Fontainebleau's 1876 landscape: "How immensely changed – and modern – does Hill's painting appear in such light-filled, compressed color visions".

The artwork, "Väg med sittande hund, Fontainebleau" by Carl Fredrik Hill. Signed Hill F-au (Fontainebleau) and executed 1876. Estimate: 5 000 000 – 6 000 000 SEK. The work will be sold at Important Spring Sale 3–4 Juni and on view 28 May–2 June at Berzelii Park 1 in Stockholm, Sweden. For more information about the work, please contact our specialists: