Bukowskis presents "Woman with Roses on Her Arm" (Lisa Fonssagrives-Penn in Lafaurie Dress) by Irving Penn on the autumn anniversary-auction Contemporary Art & Design.

Woman with Roses on Her Arm is said to have been one of Irving Penn’s favourite photographs. The image depicts Lisa Fonssagrives-Penn – a famous model as well as Irving Penn’s wife.
Fonssagrives-Penn (1911-1992) was the world’s first supermodel, before the term was even invented. From the 1930s to the 1950s she was known as “the most highly paid, most famous and greatest model of all”, and appeared regularly in magazines such as Vogue, Harper’s Bazaar, Life and Vanity Fair. She was born and raised in Sweden but moved to Paris in the 1930s, where she met her first husband, Fernand Fonssagrives – a dancer and later photographer. Together they created fashion images that met with great success and paved the way for Lisa’s career as a supermodel.

In 1939 the couple moved to New York, where eventually their marriage dissolved. During a modelling job Lisa met photographer Irving Penn and the two took a liking to each other. They were married the same year as this iconic image of Lisa was taken in Paris – 1950.

Sara Danius has written in the daily Dagens Nyheter about the couple’s collaboration and about Penn’s talent as a fashion photographer:
“Irving Penn eliminated all forms of props and concentrated on the light, the model, the cut of the clothes… It was his way of showing respect to the designer and the seamstress. At the same time he was translating minimalism for the world of fashion. He worked with a neutral background, like the worn theatre-curtain. Bike messengers would deliver the clothes to the studio in the morning, to return with them later the same day.

It was an unusually good year for French designers. But it all hinged on finding the right kind of models. Irving Penn had a knack for that too. He wanted Lisa Fonssagrives and a handful of other models from the USA. Fonssagrives was born and raised on the west coast of Sweden. As a former dancer and gymnast she knew how to move in a room for the light to sculpt itself across her body.

She was the first supermodel. No one was better paid than her, no one was more celebrated. Fonssagrives had an exquisite sense of style, she seemed at one with the clothes and was able to express their inherent movement like no other. People who met them recalled that there was a special aura surrounding Irving Penn and Lisa Fonssagrives. Later that same autumn they married in London.”

Penn printed Woman with Roses on Her Arm (Lisa Fonssagrives-Penn in Lafaurie Dress) in 1977 as a platinum-palladium print. The image was included in Camera Obscura’s first exhibition that same year. At the time the gallery was Sweden’s first and only gallery focused on photography. They organised a number of shows with what were then the best Swedish and international photographers. But their first exhibition was with Irving Penn – this was thanks to Lennart Durehed, who for a time had worked as an assistant to the already famous photographer.

In 2015 Lars Hall recalled:
“Lisa is about 39 in the image. She was a model and knew exactly what the result of her movements would be in front of the camera. What I particularly like with this image is that you can make out another face, a profile, from out of the folds of her dress”. 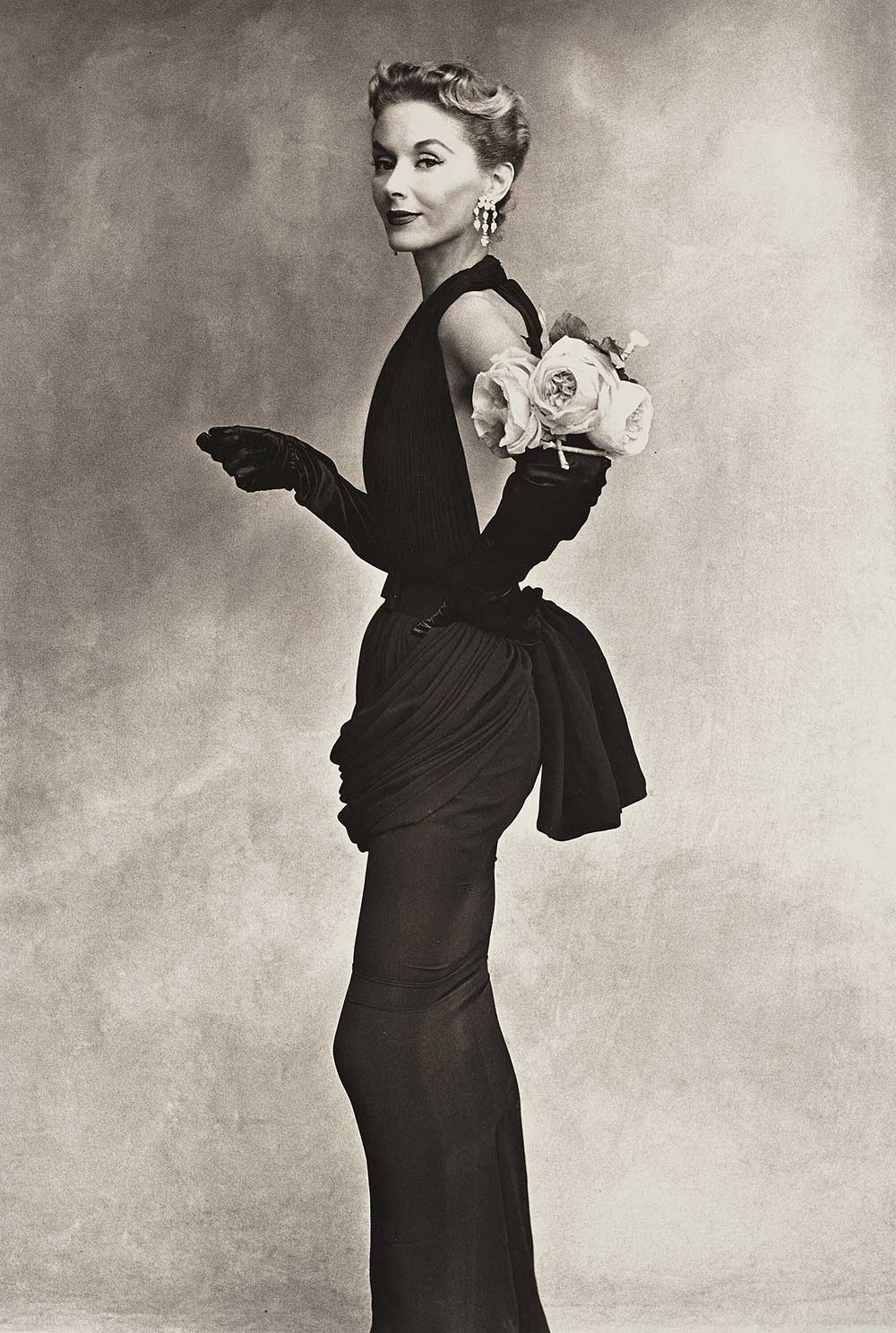