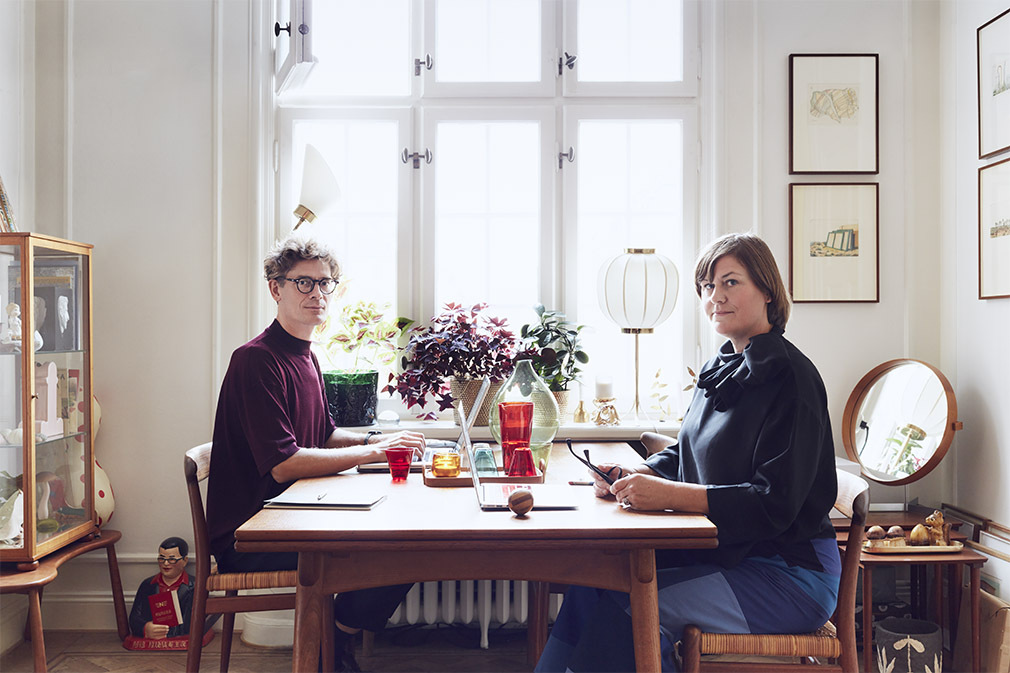 We often sit together and work at our large Hans J. Wegner table purchased at Bukowskis ten years ago. In the corner are four works from Kullahuset's secret by Sten Eklund, one of Swedish art history's most important pieces of art that never ceases to fascinate a new audience.

“The goal with Artlover was to start an art magazine that really invited readers. We wanted to meet the artists in their studios. Interview them. Photograph them.”

Let us introduce David and Teresa Castenfors, founders of the art magazine Artlover, as well as many exciting artist talks and events coming up during Gallery Weekend Stockholm, which takes place November 14-15th. Join us while visiting a home where the love of art is monumental, as well as the commitment to young artists and their long-term development. David and Teresa live in a spacious apartment in Vasastaden together with their three daughters, in a home to the shore filled with art, design and crafts. On the walls you´ll find art from Swedish and international artists such as René Magritte, Luc Tuymans, Christine Ödlund, Sten Eklund, Lotta Hannerz and Leif Elggren, to name a few. The furniture, most of them vintage from Hans J. Wegner and Josef Frank for Svenskt Tenn, has been bought at auction, inherited or even found in a container. Like Estrid Ericson, they blend fearlessly high and low, old and new, colours and patterns, which together form a cosy and calm whole. The dark wood with invaluable patina and the more traditional textiles in classic designs are challenged by both eye-catching and sometimes provocative contemporary art and sculpture, ceramics and glass.

How come you decided to start Artlover magazine?

– Experience and interest! Both me and Teresa had been in the magazine industry for many years when we started Artlover 2009. I had been the Swedish editor for Wallpaper 1999–2001 and written for magazines such as DN på stan, Elle interiör and Creative Review for example. Teresa has a degree in graphic design from Beckmans and newspaper design at Berghs, and she has also worked for many years in London, says David.

To the Theme auction.

From left: On the ceiling hangs a sculpture by Lotta Hannerz, on the wall coloured etchings by Sten Eklund, globe by Dan Wolgers and objects by Anu Tuominen. In the middle, a portable sunset by Enno Hallek. "We have three wild girls in the home, and once when our oldest daughter chased the middle daughter with a fishing rod, she pulled down the artwork by Dan Wolgers. We contacted Dan who fixed it and which also resulted in a fun exchange of letters with the artist, now an obvious part of the artwork." / On the desk an Art Nouveau lamp from David's mother, a silver platter from Myrorna and the jam pot and Janus head is from Svenskt Tenn. / Painting made by Christine Ödlund for David and Teresa.

For a long time, they had been talking about starting their own magazine. But it was only when they sat down with a terrible newspaper project and in pure frustration wrote down everything they wanted to read about that it became serious. Everything turned out to be about art! In two months, the first issue was ready and received very well.

– In my teens, I had worked extra in a gallery and to meet the artists and hear them talk about their "worlds" was at this young age a little incomprehensible but fascinating. Looking in the rearview mirror, I am sure that it has been essential for my future choices, David continues.

The goal of Artlover was to start an art magazine that really invited the readers into the art world. David and Teresa wanted to meet the artists in their studios. Interview them. Photograph them. They talk about how they try to get behind the scenes and translate that to their readers in text and image. Today, it is not uncommon to see artist portraits and pictures from studios, but eleven years ago, there were hardly any.

– We work with Artlover today in the same way as we did in the beginning. We do not include any reviews but only write about the art we think is worth paying attention too. In 2012, we also started up Artlover edition, which publishes multiples with some of Sweden's foremost artists, says Teresa. 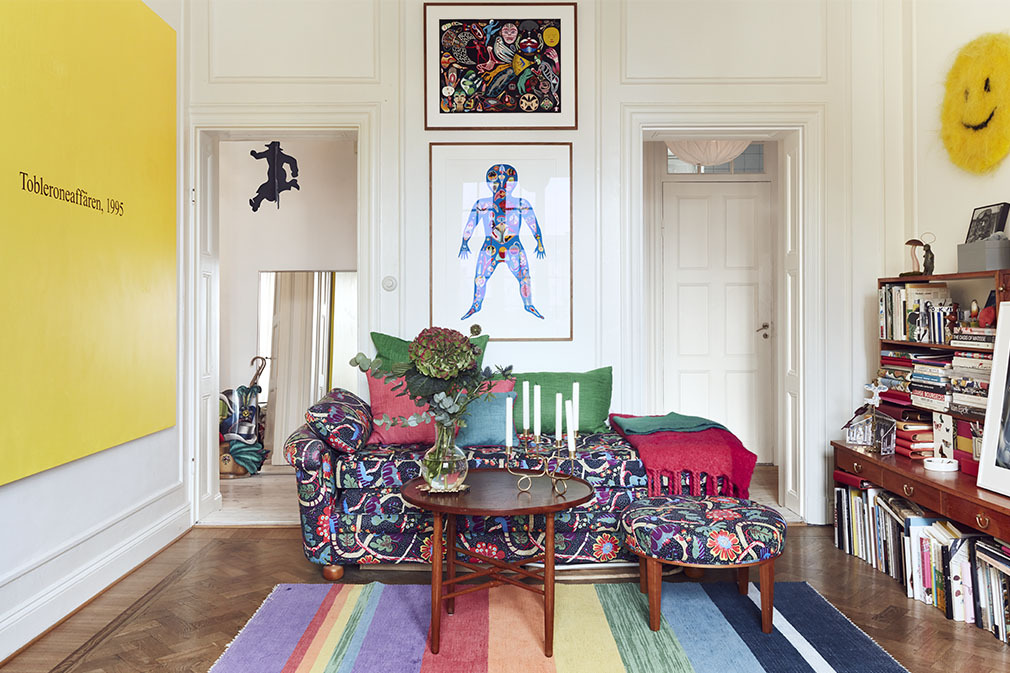 The large yellow painting Toblerone Affair is made by the artist and friend Martin Thelander who made an entire exhibition about Mona Sahlin's CV at Galleri Thomas Wallner 2015. Above the divan hang two brilliant silhouette paper prints by Lisa Jonasson, purchased at Galleri Magnus Karlsson. To the right a smiley by Icelandic Shoplifter, from Hverfisgalleri.

– Martin is an incredibly talented artist who should get the chance at a good gallery in Stockholm. We managed to make a deal and save the once borrowed artwork a couple of years ago, says David.

The stories of meetings with artists that they have met and become close with through their work and lifelong interest in art are many. Several of the pieces they have received as gifts directly from the artists, and if they buy art, it is always with the heart, which over time has proven to be a good investment. An extensive textile work by Nadine Byrne, which they together carefully unfold and display, is just one of many artworks they have fallen in love with and have not been able to resist.

– We have more art than we have room for at home. It's a shame. Art is for everyone to see, says Teresa while David from nowhere picks out an eye-catching lithograph by Luc Tuymans, one of the world's most influential painters, whom he interviewed on two occasions in Antwerp in 2016.

Wherever you look, there is something new and fascinating to discover. On the ceiling hangs the sculpture Tropical Island (2010) by Bigert & Bergström from Belenius. 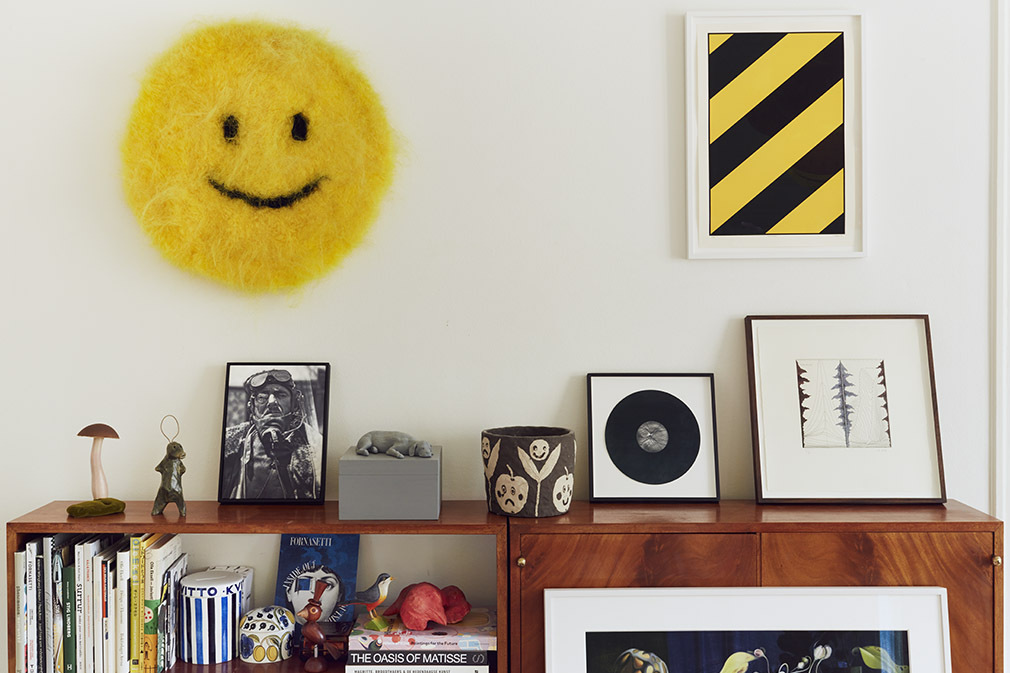 From left: Hans Wegner's chair W2 in teak and rattan is among the most beautiful chairs we know, but you get a damn back pain from sitting on it… The chairs come from Teresa's neighbours who threw them from the second floor in a container for more than 30 years ago. We made sure that they got a new life in our home after the renovation at Larsson Korgmakare. In the window, an early candlestick by Åsa Jungnelius bought at Platina in the early 2000s and Josef Frank's china lamp. / David has seen several good Magritte exhibitions in recent years. Both at the MoMA in New York and the Royal Museums in Brussels, he came across the work L'oeil which he could not release. This year, a copy appeared at auction which he managed to call in. / Mask by Lotta Hannerz, mushroom by Per B Sundberg, seashells from Italy, snapped by Ettore Sottsass, candlestick by Per B Sundberg, lamp by Maurizio Cattelan, pillow by Yayoi Kusama. 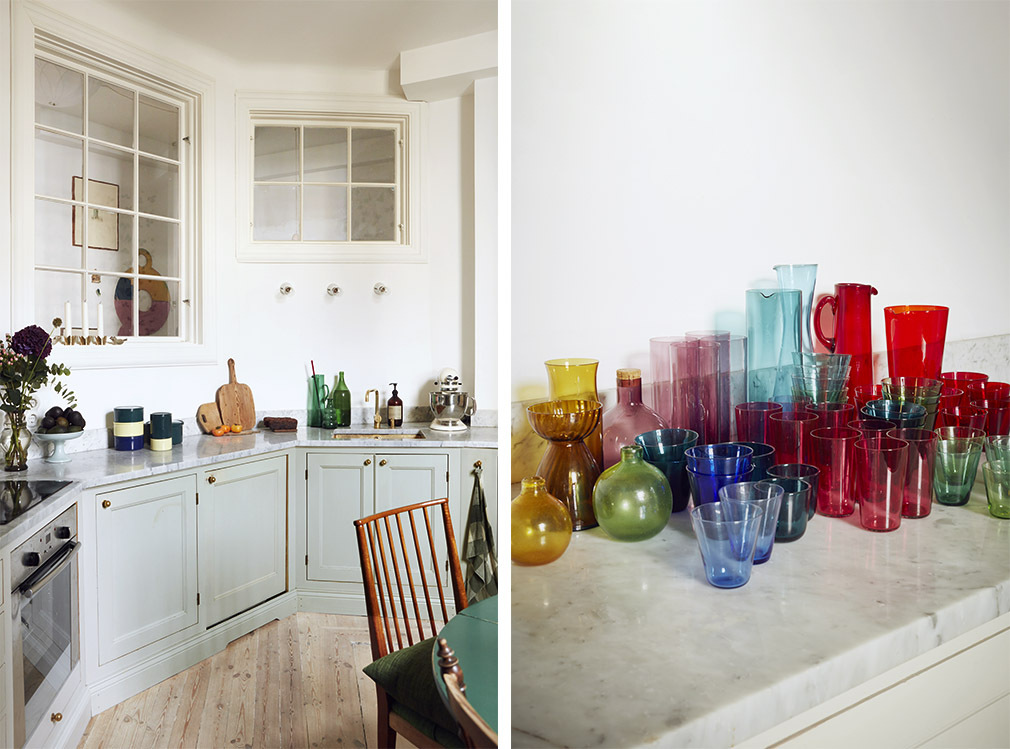 Teresa asked the artists Gilbert & George to write captions by hand for old works of art for a spread in Artlover. It turned out so nice that they framed it.

In the site-built kitchen, which goes in green and grey, with wallpaper in the pattern Klöverblad by Josef Frank, auction and sought-after flea market finds are mixed with rarities from some of our leading designers. Items to nurture and take care of for a long time. That Teresa has a preference for old glass can be seen not least in the large collection of Kaj Franck's hand-blown glass for Notsjö, which is a favourite in the home. The collection is large but is kept in check because they just as often give away the glasses as a gift to family and friends instead of a bottle of wine or bouquet of flowers. Here they mingle with other colourful glass by Monica Bratt for Reijmyre and Ebba von Wachtenfeldt for Skeppsta hytta.

The glasses, as well as the many pewter objects on the green vintage table, the storage vessels from the Kilta series by Kaj Franck, the handmade cutting board, the small argenta plate and the antique French bowl on foot, Teresa has collected over a ten-year period. Common to everything in the home is that art, furniture and crafts carry a personal story, as well as a story about the life they have chosen to live.

From left: Black lithograph by Jockum Nordström. In the background wallpaper Chrysanthemums by Josef Frank and mirror from Fornasetti. / The painting Studio by Jens Fänge from the artist's first exhibition at Galleri Magnus Karlsson 2006. On the floor the iconic lamp Pipistrello by Gae Aulenti from Teresa's parents' home. / Above the bed hangs Olle Norås gouache Big birds fly in the wrong direction 4, pillows by Liselotte Watkins, blanket by KG Nilsson for Arket. 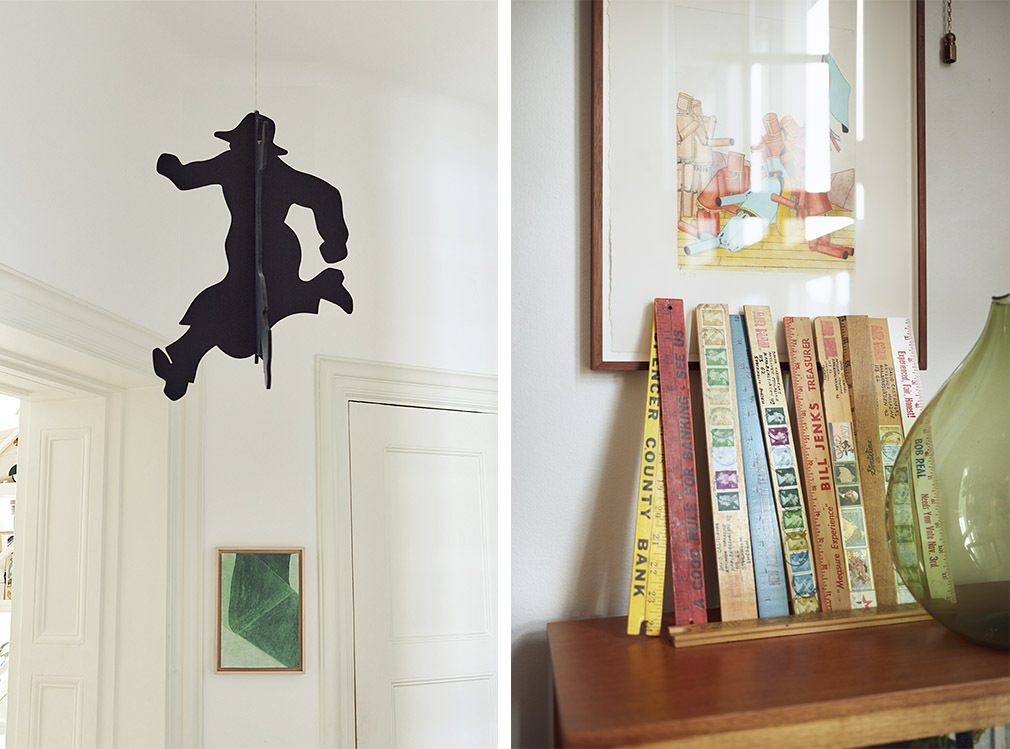 From left: Hanging sculpture The Shadow by Jan Håfström and on the wall oil pastel Bonds nr2 by Liva Isaksson Lundin purchased at Wetterling Gallery. / 2012 we interviewed the English artist Peter Liversidge in Artlover. In the weeks that followed, rulers began to appear in the mail. An unexpected but fun memory. An interesting artist who, among other things, exhibited at Bonnier's art gallery in Sweden.

David and Teresa think it is essential to have things around them that mean something, that you value and take care of. The idea that the objects will pass on to the children is something they think about, well aware that it can be just the opposite. After a revolt perhaps, we will see, says Teresa at the same time as the photographer Pierre Björk (a close friend of Artlover) says goodbye. The light outside begun to dim and the many stories from a home full of art and a life enriched with art experiences and meetings with artists from all over the world is what we will take with us meeting David and Teresa Castenfors.