Rut Bryk was born in Stockholm in 1916. She dreamt of becoming an architect but her parents disagreed on this occupational choice since they did not think that the architectural profession was right for a woman. Bryk then chose to study graphic design at the Central School of Arts and Crafts in Helsinki. In 1942, she started to work for Arabia.

At first, Rut Bryk worked alongside her older colleague Birger Kaipiainen, and her work from this period is strongly related to Kaipiainen's creations in sgraffito- technology. The motifs are painterly narrative.

In the 1950s, Bryk developed a new technique for reliefs based on plaster casts, a type of ceramic graphics. The motif becomes different in thicknesses which gives an exciting depth effect. See "Easter Bird" eller "Katt", both lovely examples of Bryk's new way of working.

During the 1950s, Bryk's motifs were varied. She produced still-lives in the spirit of George Braque alongside biblical motifs as well as more light-hearted ones.

She also worked on a series of architectural reliefs, "Karelian Houses" "Venetian Palaces" and see there, her childhood dream of becoming an architect finally came through. One excellent example of this is 628: 87 relief from the "Cathedral of Siena”. The entire Siena suite consists of seven different parts, where the largest is 150 cm high. 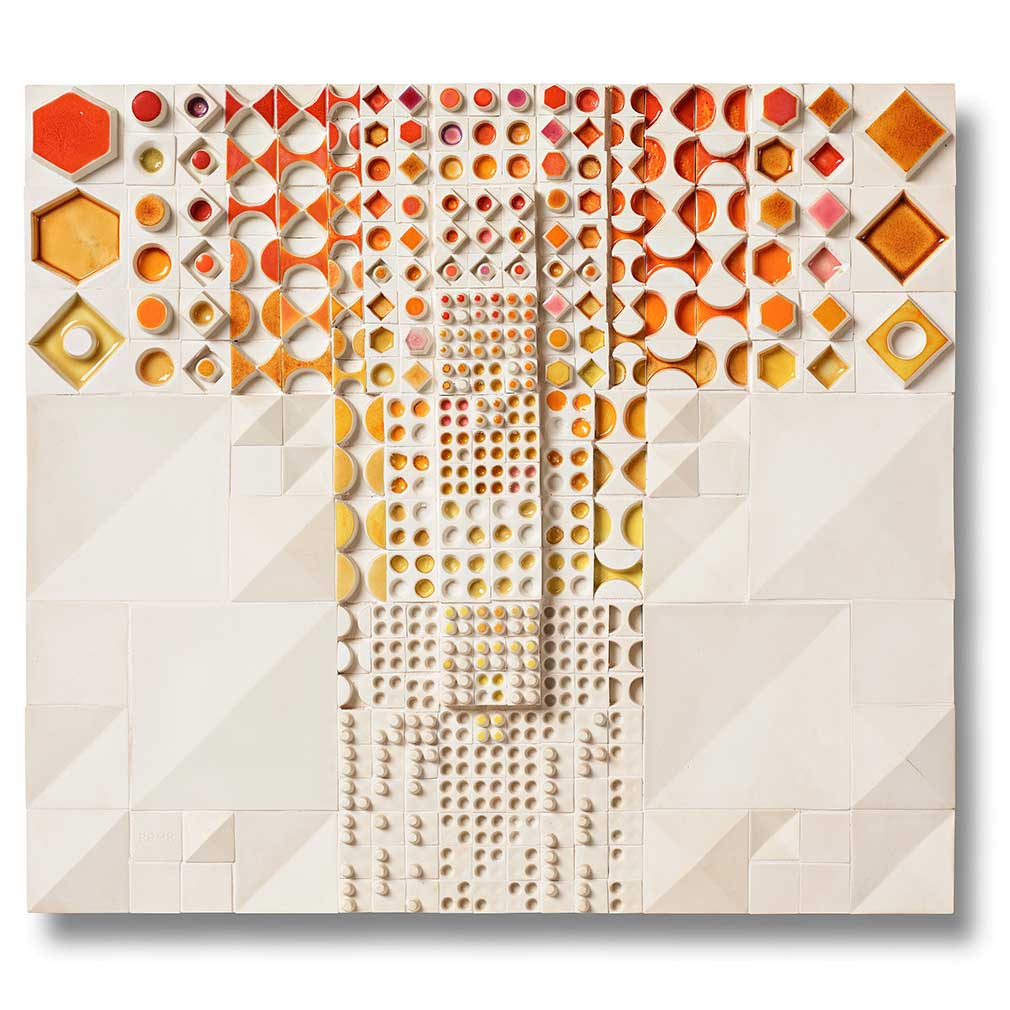 In the late 1950s-1960s, Ruth Bryk's motifs become less and less figurative, the focus turns into geometric shapes and conceptually designed works of art. "City" a conceptual work consisting of many different parts and types that were made partly as a larger whole, partly as parts thereof, see for example following works in the upcoming auction 628:90, 628:86 och 628:88.

In the late 1960s, Rut Bryk goes further and creates three-dimensional ceramic works where the emphasis is on a play between volume and light and colour. She gets several assignments where she can create monumental works. An example of a work from this era is the red-, yellow and orange stoneware wall relief we see here above.

It is rare to see a ceramicist/artist who develops so impressively over time as Rut Bryk. Rut Bryk has been married to Tapio Wirkkala since 1945, their imprint in the Finnish art industry is undeniably large. Rut Bryk passed away in Helsinki in 1999 at the age of 83.