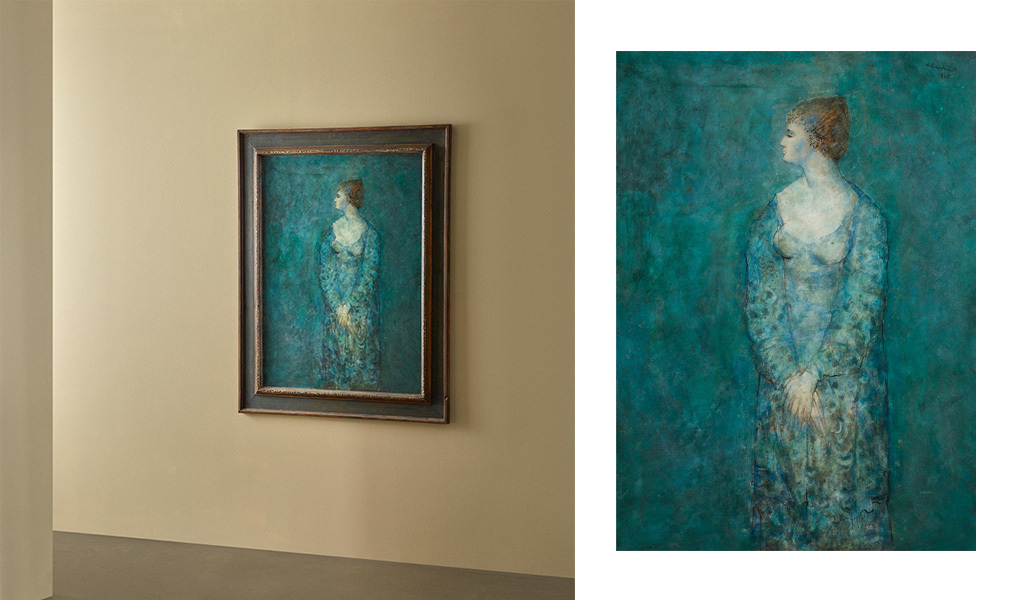 Painter and graphic artist, professor Unto Koistinen (1917–1994) was one of the foremost modernists in post-war Finland. The early works of Koistinen had interfaces with national expressionism, but soon his path led towards a completely unique form of expression. Koistinen’s work consisted of drawings, paintings and graphics.

From his early years on, Koistinen’s atmospheric landscapes and portraits had a strong sense of form and powerful colours. After the development phase in the 1950s he started to focus increasingly on depicting persons. In the 1960s he introduced cameo paintings with brown tones. The name refers to cameo jewellery. Koistinen got the inspiration from Italy, where he had studied old frescos. In these paintings, female figures, depicted with delicate lines, shine translucently against a dark background. Despite their incompleteness, the female figures are pictured as monumental and idolised.

Blue Girl, finished in 1975, represents Koistinen’s later period. At this stage, the atmosphere in paintings depicting women became increasingly devout, and their exemplars were to be found more distinctively in the past, in the female figures of the antique and the Renaissance.

The drawer’s line blossomed out and the colour palette adopted melancholic dark tones of green and blue. In Blue Girl the restrained, almost immaterial female figure rises from the glowing turquoise background as aloof and noble, turning her face away from the viewer. In the painting, painted with translucent oil paint, elegance has risen over spontaneous expression. Blue Girl was an especially significant work for the artist himself – he refused to sell it and wanted to keep it on his own wall until the end of his life.

Read more about the auction