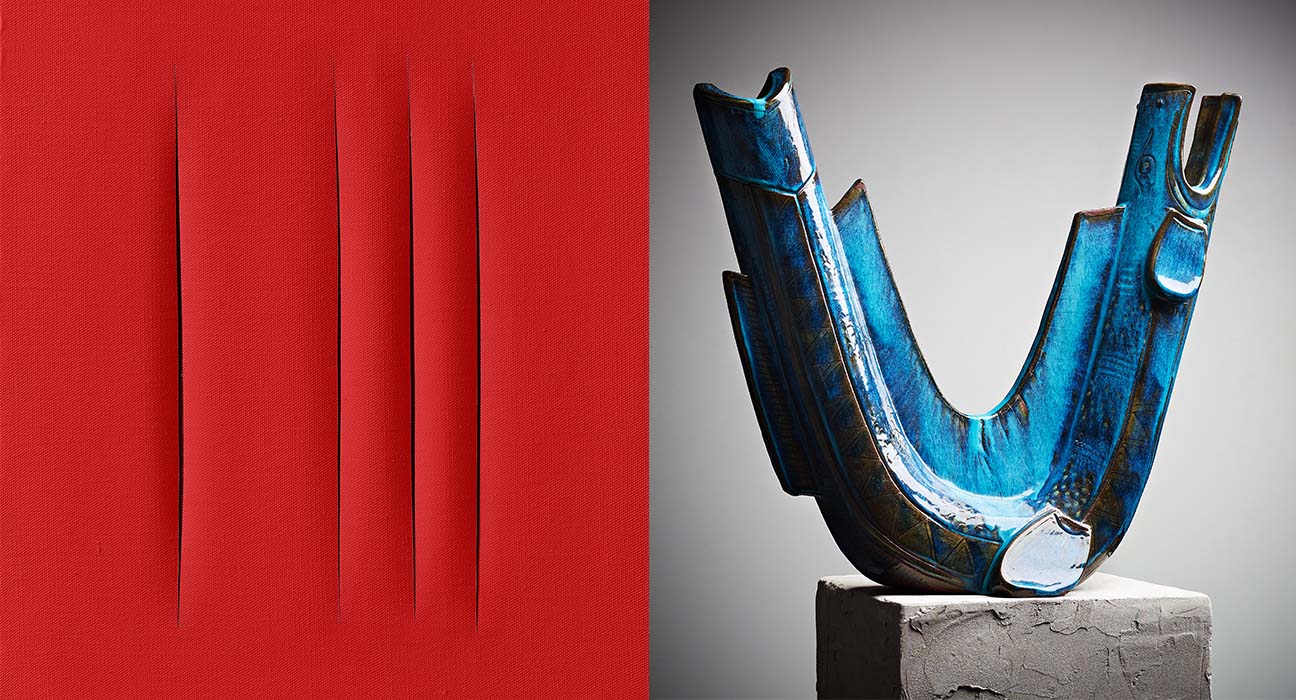 The auction's highest estimate, 14 000 000 – 16 000 000 SEK, stands for Lucio Fontana's brilliant red "Concetto Spaziale, Attese". The work is part of the iconic Tagli series which Fontana created in Milan between 1958 and 1968. The artwork has come to represent Fontana’s expressive imagination and creation.

“We are proud to present an auction with a unique international section with works of global names such as Pablo Picasso, Lucio Fontana, Fernando Botero and Marc Chagall. The Swedish department is also unusually interesting with several important works by our most important modernists such as Leander Engström, Nils von Dardel, Erik Olson, Sigrid Hjertén and Gösta Adrian-Nilsson”, says Lena Rydén, Specialist in Modern Art and Prints.

Bukowskis are pleased to present Pablo Picasso’s, "Buste d'homme", in this autumn’s auction. The work, which dates 1969, is part of a series of portraits of historical characters that Picasso created during the later years of his life, when he found himself in a new creative phase, and where is uncanny desire to explore painting dominated.

Swedish artist Leander Engström's "Nymph" is painted in dramatic composition with cool, elegant colours. The work has the highest proclamation in the Swedish section, with an estimate of 2 500 000 – 3 000 000 SEK and is appreciated as one of Engström’s artistic highlights. The auction also includes two important works by Peter Dahl, "Bowl" and "The Green Room", several works by Nils von Dardel, concrete composition by Erik Olson, the colourful "Blue barges" by Sigrid Hjertén as well as several exciting works by Gösta Adrian-Nilsson (GAN).

The design section contains interesting furniture and applied art that represent the development of furniture design in the Nordic region during most of the 20th century. Around 20 items, which have all been previously owned by Svensk Tenn’s Estrid Erickson, are included in the auction. The different types of objects clearly show what is still significant today for Firma Svenskt Tenn, for instance a broad mix of timeless objects that never seems to be outdated and constantly awakens the desire among new generations.

Further highlights in the design section are Gustaf Fjaestad's sculpted and carved furniture from the beginning of the 20th century, alongside Axel Einar Hjorth's furniture group "Sandhamn", the only model among the Sportstuge furniture that were most likely manufactured at Nordiska Kompaniet’s own workshops.

When it comes to pottery and stoneware, Bukowskis have the joy of selling fantastic items from some of our most reputable Scandinavian potters from Gustavsberg, Wilhelm Kåge, Berndt Friberg and Stig Lindberg. Michael Schilkin, Birger Kaipiainen and Rut Bryk represent Finland, while Axel Salto represents Denmark. Highlights include an extremely rare dragonfish by Wilhelm Kåge in "Farsta-blue" glaze.

A guide for buyers – how to bid

You can bid with a paddle in the auction room, by phone, by absentee bidding, or by live online. Choose the option you find the most convenient. Please notice that if you are an online customer, you need to be approved as a hammer auction customer to be able to bid at the auction. This rule applies regardless if you choose to bid in the auction room, online, by phone or by absentee bidding. Contact validation@bukowskis.com to get the approval or if you have any further questions.

You can participate in the auction in real time via a computer. To submit online bids in excess of SEK 3 million, we need a bank reference. Please email our customer service at info@bukowskis.com to be cleared for this level of online bidding.

**Please notice that you need to be approved as a hammer auction customer to be able to bid at the auction. This rule applies regardless if you choose to bid in the auction room, online, by phone or by absentee bidding.

If you are a new customer, register first, then fill out our telephone bidding application form and email it to telephonebid@bukowskis.com Please specify the catalogue number of the lot, your full name, customer number, and the telephone number(s) where you can be reached during the auction.

Existing customer: Fill out the telephone bidding application form and send it to telephonebid@bukowskis.com
Please specify the catalogue number, your full name, address and the telephone number(s) where you can be reached during the auction.

In the auction room

Register at Bukowskis, Arsenalsgatan 2 in Stockholm from 9 AM at the day of the auction.

If you cannot attend the auction in person, we can bid on your behalf. Our customer service personnel handle the bidding confidentially and strive to obtain the lot for you at the lowest possible price.

Click here for the absentee bidding submission form and send the filled out form to info@bukowskis.com

If you need any assistance before the auction, do not hesitate to contact our customer service at +46 8 614 08 00.

Payment must be made within 8 working days of the end of the auction. Payments for items purchased by private individuals with an address in Sweden, Finland, Germany or Austria for total amounts of up to SEK 100.000 are made via Klarna’s payment service. Payment options, e.g. card payments or invoice, are shown on the payment page. Payments are made via bukowskis.com under ”My pages”. Payments for commercial customers and for private individuals for total amounts exceeding SEK 100.000 will be invoiced by Bukowski Auktioner AB. You will find your invoice at ”My pages” at bukowskis.com. Payment may also be made at the auction itself at Bukowskis’ premises at Berzelii Park. Please note that payments cannot be made in cash.

During the auction 26–27 November it is possible for you to collect your paid objects and unsold objects at Bukowskis Arsenalsgatan 2 in Stockholm. Opening hours: Mon–Fri 9 am–5 pm.

Please note: You can´t collect your items on Thursday 28 November

As from December 11th a storage fee 50 SEK per item and day will be charged for uncollected items. Full payment must been received by Bukowskis before lots can be collected.

We now offer delivery to a location of your choice. For quotes and information, please contact: specialdelivery@bukowskis.com.